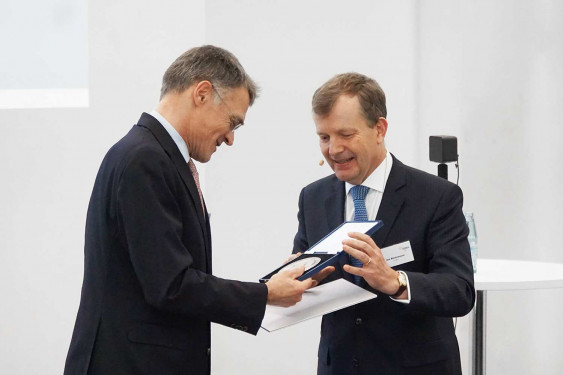 WÜRZBURG, Germany - April 25, 2018 - Friedrich Koenig, inventor of the steam-powered cylinder press and pioneer of modern newspaper printing, founded Schnellpressenfabrik Koenig & Bauer together with Andreas Bauer in 1817. Two hundred years later Koenig’s great-great-great grandson Claus Bolza-Schünemann manages the company in the sixth generation. Claus Bolza-Schünemann was honored with the Friedrich-Koenig medal for his exceptional achievements in press manufacturing. “I am deeply honoured to receive this award,” said Bolza-Schünemann at the award ceremony. “This award rounds off our 200-year company anniversary perfectly.” Following in the footsteps of his grandfather and his father, Claus Bolza-Schünemann is the third family member to receive the medal awarded by the German Mechanical Engineering Association (VDMA).

In his tribute to Claus Bolza-Schünemann, VDMA Printing and Paper Technology Association president Kai Büntemeyer listed Bolza-Schünemann’s achievements in press manufacturing. These include president of the Research and Development Association for Printing Machines since 2004, member of the board of the VDMA Printing and Paper Technology Association since 2012, and his “outstanding role as president of the industry’s leading trade show drupa”. In addition to his role as president and CEO of Koenig & Bauer, Bolza-Schünemann has taken on the responsibility of the entire field of press engineering by taking on these further posts. Furthermore, as an engineer he has accompanied an impressive range of printing technology innovations which have been developed in the Koenig & Bauer group.

Claus Bolza-Schünemann, who was born in 1956 in Würzburg and has four children, took a degree in electrical and digital technology after originally qualifying as a radio and television technician. Koenig & Bauer has profited from his know-how since 1989 and Bolza-Schünemann has been president and CEO since 2011. Under his leadership Koenig & Bauer is characterized by a consistent fusion of analogue and digital print worlds. Inkjet and web offset merge in the company’s printing systems and sets the CEO’s technical pulse racing: “Inkjet is fantastic process. Our RotaJET generates 5.4 billion ink drops per second and the size of each individual droplet can be precisely modulated.“

“On the back of his enthusiasm for modern press technology, Claus Bolza-Schünemann has set Koenig & Bauer back on a successful path, fulfils his duties as drupa president, supports the collaboration with our association and pushes for the market success of German press engineering,” says Dr. Markus Heering, managing director of the VDMA Printing and Paper Technology Association. He more than deserved the Friedrich-Koenig medal in recognition of all his achievements.