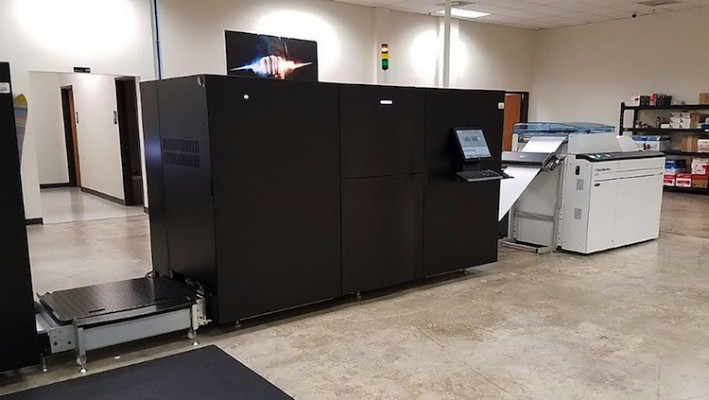 Pictured here is the Standard Hunkeler UW6 unwinder and one of the engines of the continuous-feed Ricoh InfoPrint 5000 GP color inkjet press in operation at NMD&D Inc. 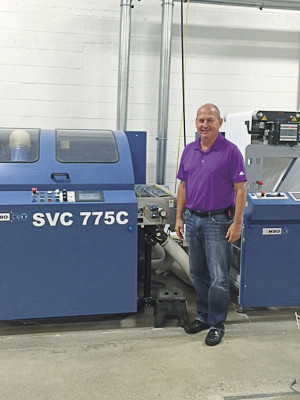 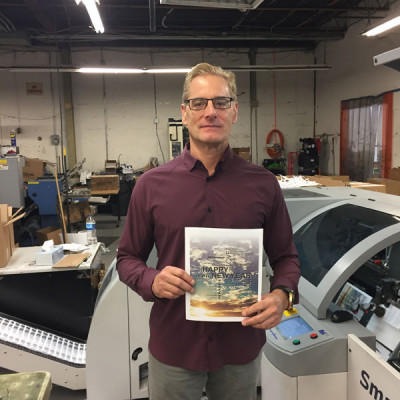 Since adding digital finishing equipment into their production inkjet workflows, the following four printing establishments have been able to better meet their customers’ deadlines and requirements, have been able to take on new work they could not do before, and have significantly eliminated the manual steps that were previously required to complete a job.

NMD&D Inc. is an Irving, Texas-based provider of transactional services, including business-to-business communications and solutions services, with branches in New Mexico, Nevada, Texas and the New England states. Some of the printed materials the company specializes in include direct mail products, directories, brochures, manuals, books, statements and invoices, lobby displays, newsletters, collateral material, kits, and signage for the financial, healthcare and government segments.

According to CEO Waleed Ashoo, NMD&D Inc. invested in the Hunkeler DP8 dynamic perforator to handle the production of statements and invoices, directories and books. “The DP8 simplifies the process and is ideal for book blocks where pages need to be perforated, as well as for transactional and direct mail that contains coupons — whether multiple perforations needs to be at the bottom or at the center of the letter.”

Prior to installing the new digital postpress equipment, Ashoo recalls the time when finishing had to be completed the “old fashioned” way, which he says required a lot of labor. “A job had to be manually printed, then it needed to be jogged in order to trim and cut it, and then it would be folded and perfed separately. We can now do all of this in-line and much faster for our customers to meet very stringent requirements on service-level agreements, while not having to add a lot of labor.”

One of the other features that Ashoo likes about the DP8 is its ability to handle the dynamic and variable perforations for the production of statements and invoices with different configurations. “It’s not just variable in the sense that we are printing variable messages on a sheet of paper. We are also able to program and vary the number of sheets that go into an envelope and which sheet gets the perforations,” he points out.

The ability to customize magazines, directories, manuals and books using the company’s systems, is another feature that Ashoo likes. “Instead of just having copies of static pages with the same message, customers can have a variety of variable messages in full-color,” he notes. “Those are some of the really dynamic products and services that both the finishing system and the InfoPrint 5000 GP inkjet system allow us to do.”

Even 10 years ago, Ashoo explains, creating that kind of customized job was not possible because both the hardware and the software didn’t come together to allow that kind of work. “Today, we are able to produce publications, magazines or books (a book of one) with some unique features, without having to go back and put it together manually,” he says.

NMD&D Inc. also houses a book factory and works with Amazon to print individual book orders on-demand. “When Amazon gets an order for one of our books, it places that order with us, and we actually produce the book and the cover,” Ashoo notes. “Utilizing our binding and digital finishing capabilities, the book can then be laminated, coated and bound in several different ways based on whether it’s a hardcover or softcover book. The book is then shipped to the customer.” In addition to producing a book of one, Ashoo adds that there are times when the company will run hundreds of books a day.

At Allied Printing, a 65-year-old commercial printer in Ferndale, Mich., targeted direct mail is a major niche. To produce highly-personalized marketing materials, the company employs an HP PageWide T300 color inkjet web press installed in 2015, along with a 30˝ SHP 800 high-pile stacking system (which includes the 30˝ SVC 775 C sheeter, as shown in the photo on page 24) with mobile cross carriers from MBO America. Installed in 2014, the finishing equipment from MBO, which runs near-line to the HP PageWide T300, can be rearranged to accommodate a wide range of job applications. Allied has the ability to swap the cross carriers out of the system in favor of other finishing modules, allowing it to produce palletized stacks off a roll or integrate a wide range of other functions such as perforating, scoring, slitting and folding — all at high speeds with minimal makeready.

Prior to implementing its digital web printing and finishing platform, Allied was a cut-sheet digital environment, which significantly limited the shop’s ability to produce high-volume work and achieve the required deliverables of its clients as their demands for its services increased.

“Before making the investments in high-speed inkjet printing and finishing, we recognized that our best opportunities for growth in the next decade would be in the direct mail space of our industry,” explains Allied Printing COO Tony Pelc. “HP and MBO America stood out in the 30˝ arena and have proven to be great partners. The investments have provided a mechanism for us to grow our digital business over 10 times from our previous capabilities.”

The SHP 800 can create palletized stacks of full-size sheets (28x40˝), or be reconfigured for folded work. By separating the stacking modules from the unwinding and sheeting modules, MBO was able to provide a solution that can swap a mobile folding system in before the stacking system, eliminating the bottleneck that previously existed.

According to Pelc, the configuration has proven to be extremely reliable and consistently runs at rated speed with an uptime that averages over 95%. “This has allowed us to consistently achieve the results that our clients demand and increased our confidence and ability to get product to market in a quick and efficient manner,” he adds.

A UV-coated direct mail piece that Allied produced for a luxury auto-maker, which it printed on its HP inkjet press and finished on the high-speed MBO line, illustrates the high quality that can be achieved. “We were able to run at high speeds and the result was a beautiful product that the client loved,” Pelc relays.

When doing digital runs, time-to-market is much quicker than with conventional, which Pelc says is advantageous. “Thanks to MBO digital web finishing technology, we can run much tighter timelines with confidence in our ability to produce a high-quality result.”

With its inkjet press and digital finishing technology in place, Allied Printing has renovated a 40,000-sq.-ft. facility to create a digital direct mail center. This facility supplements its existing 40,000-sq.-ft. conventional printing operation and 60,000-sq.-ft. fulfillment center. These investments are all part of Allied’s four-year growth plan.

“As we continue to grow our business and add capacity, we will certainly bring in additional finishing lines from MBO America to accommodate the increased demand,” he concludes.

Founded in 1992, John Patrick Publishing Co. (JPPC), in Trenton, N.J., prints weekly bulletins and publications for more than 500 churches throughout the United States. The 8.5x11˝-format page counts are generally between eight and 16 pages, with average run lengths less than 1,000 bulletins. In addition to weekly bulletins, JPPC provides many other printed communication products for parishes, along with website development services.

In 2015, JPPC CEO John Hartmann made the decision to convert print production to digital. He invested in an HP T Series PageWide inkjet web press, Tecnau web processing equipment and a near-line IBIS Smart-binder SB-3 Plus HS, which was installed in the summer of 2016. The paper rolls are printed on the HP inkjet web press and unwound and cut into sheets by a Tecnau web cutter from where the sheets flow directly into the Smart-binder.

Hartmann describes the Smart-binder as a heavy-duty, fast saddle stitcher, which allows for frequent changes in booklet pagination. It plays a key role in meeting the requirement for on-time delivery of the company’s short-run bulletin documents.

“Prior to using the Smart-binder, we had to use several pieces of equipment depending on the final finished format. Now, anything other than a job that requires four to six pages or more, goes on the Smart-binder and we can just process rolls, one right after the other. It’s really been phenomenal,” he says.

Using the HP T Series web press, Hartmann notes that jobs can be moved around in the queue, then placed on rolls and then taken to the Smart-binder. The Smart-binder has also allowed the printer to print larger bulletins up to 24 pages. The company also brings in outside work that requires more pages and the IBIS can handle 36- and 48-page books without a problem.

“Our capabilities have been enhanced in the commercial work we produce to allow us to run much larger books,” Hartmann concludes. “We are producing about 200 of them, and the Smart-binder has simplified the process. It reads the barcode and finishes the book. It’s pretty incredible.”

Full-Color Church Bulletin Booklets
Another producer of church bulletins, Liturgical Publications (LPi), in New Berlin, Wis., was also looking for a way to simplify the finishing process. The company grew from producing a one- to two-color product — four to six pages in size — to full-color, 16- to 32-page booklets. The color complexity and need for quality and consistency required that LPi explore different technologies to meet its customers’ demands.

Originally, LPi considered utilizing Tecnau’s in-line equipment but decided to go with a roll-to-roll configuration with near-line finishing to increase efficiencies and reliability. The Tecnau 566 stacker builds 8.5˝ stacks either one-, two- and three-up, to be transported to near-line or off-line finishing units, such as the perfect binders.

LPi began printing church bulletins more than 40 years ago, and the family-owned company continues to grow that core business. The bulletins and newsletters are produced on a weekly or monthly basis to its customer base of more than 4,000 churches across the United States. Headquartered outside of Milwaukee, the company operates satellite offices in Cleveland; Hartford, Conn.; Orlando, Fla.; and Denver to better serve customers in those regions. Other products and services LPi provides for parishes and religious organizations include newsletters, ministry directories, welcome packets, calendars and website design and hosting.

According to Ken Hause, pressroom supervisor, issues that existed prior to installing the new digital finishing equipment have since been resolved. He reports an increase in uptime, speed and productivity; a decrease in errors, reprints and overages; more staging space for jobs to be collated and folded; and the ability to better meet customer deadlines. In addition, minimal maintenance is needed on the equipment.

“The digital finishing equipment has smoothed out the production process tremendously,” Hause concludes. “Integration of the data needed for a given job is done through a barcode. In addition, because we are running our press roll-to-roll and the fact that our average run length is 800, transitions from job to job are seamless.”