Edward Rothschild believes in the old adage, “If you’re not growing, you’re dying.” The 58-year-old owner of three award-winning AlphaGraphics franchise locations has witnessed major changes in the printing industry over the last 20 years, and he meets challenges head-on.

“I’m optimistic about the industry,” he says. “Although our [traditional] presswork is going down, our digital color keeps going up.” Large-format is also a "huge" source of business for the company. So, it is within these areas that AlphaGraphics Denver is expanding.

Such foresight has kept Rothschild afloat in what some consider an overcrowded industry. “We’ve invested in the people and the software, and all the bells and whistles,” he explains of his $4.3 million operation. “Every year, we add better systems and more automation.”

For example, compared to other shops in the AlphaGraphics family, AlphaGraphics Denver is a “heavy user” of the franchise-provided Web-to-print solution—so heavy, in fact, that the shop uses three different software packages to build digital storefronts for online ordering: EFI Online Print Solutions (OPS), Four51 and CoreBridge, which it is beta testing. “We develop sites for almost all of our larger customers,” he notes.

As a member of a franchise, AlphaGraphics Denver also uses its parent’s marketing materials, technical support and training services. “But the greatest value is actually working with other AlpaGraphics franchisees,” Rothschild observes. “I have a small peer group, and we get together about twice a year. That’s where you learn more than anywhere else: from your peers.”

His peers could learn a lot from AlphaGraphics Denver, too. This year, the company beat out nearly 260 other AlphaGraphics franchises around the world to take home the 2015 “Franny Award” for best-run business. And in 2013, it was named “Business of the Year” for the city of Arvada, Colorado.

Arvada is where Rothschild opened his flagship shop in 1996.  A few months later, he acquired a second AlphaGraphics that was already in business and subsequently did a tuck-in. “Eventually, we acquired an independent and converted it into an AlphaGraphics shop,” he continues. “I’ve done two other tuck-ins since then.” 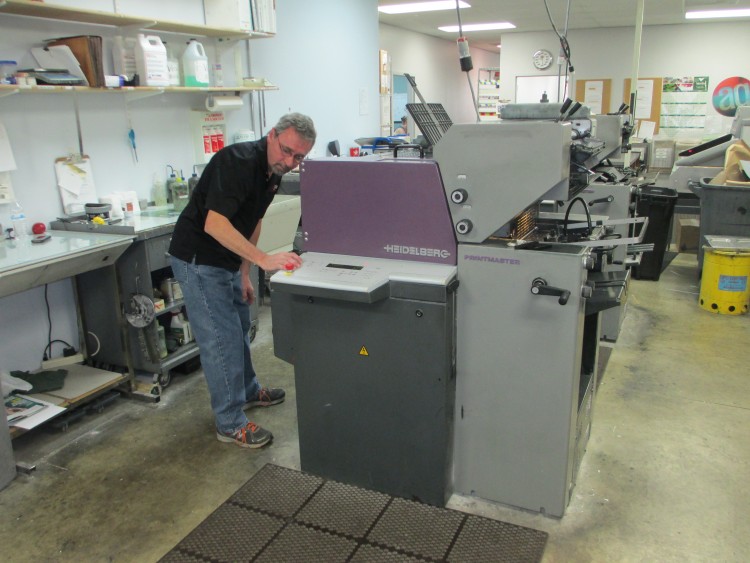 Most of the equipment is housed in the 9,000-square-foot Arvada location, about 10 miles outside of Denver. Rothschild’s downtown shop is 2,800 square feet, but because it is located on one of the two most expensive blocks in Denver, the 30-member team has been shifting equipment out of there and using it more and more for sales.

“Our market is very fast-turnaround—often digital—work such as marketing materials, presentation books and business cards,” he relays. “We have two production color devices downtown. A Xerox Versant 2100 press was our last purchase, and it’s been a very good device for us. A bonus feature is that it runs #10 envelopes really well.”

Rothschild also has a smaller, 1,200-square-foot operation in Golden, Colorado. “To put it in perspective,” he deadpans, “my parking downtown [Denver] is more expensive than my rent in Golden.”

Before purchasing his first AlphaGraphics franchise 20 years ago, Rothschild had no experience in the printing industry. His background is in geology and zoology.

“I was in the environmental industry for about 20 years as CEO of a publicly held engineering firm,” he explains. “I got tired of traveling and working for a foreign corporation, so I decided to do something a little different.” Just a little.

Being a methodical type, Rothschild considered the pros and cons of about 50 different businesses—everything from selling exotic meats to manufacturing picture frames. “Printing intrigued me because it was business-to-business, technology oriented and rapidly changing,” he adds.

AlphaGraphics Denver measures several aspects of its business operations and customer feedback on an ongoing basis. “We are very aggressive at measuring customer satisfaction using Survey Advantage,” Rothschild explains. “In addition, we measure redos, revenue-per-employee, sales and about three or four other variables.”

Although marketing services doesn’t yet represent a large portion of its revenue stream, AlphaGraphics Denver has embraced it wholeheartedly. The company has three outside sales reps, a director of sales and marketing, and three inside salespeople. Rothschild himself is DMA certified by the Direct Marketing Association, one of the few entities that certifies marketers.

“It’s important to take on marketing as part of the communication process with our customers,” he maintains. “We do lots of work with sole proprietors, like small restaurants, for example, and we can act as their marketing department. Then, for the bigger companies, we are able to speak the same language and implement marketing ideas for them, as well.”

He also credits his customers as essential to keeping AlphaGraphics Denver ahead of the game. “We’ve had extremely loyal customers, and our businesses have grown together during these past 20 years,” he says. “That’s been critical for us.”

The business caters to a wide variety of industries, but manufacturers represents its biggest client base. In addition, engineering and construction verticals provide substantial business, due to Rothschild’s background. “Also, oil and gas,” he adds, “because that’s Denver.”

Of course, Rothschild’s home state is also famous for its legalization of marijuana. Although the industry does not generate a lot of sales, AlphaGraphics Denver does sees a spike in jobs when large cannabis conventions occur a few times per year. “I can always tell when they’ve been in the store, especially the dispensaries,” he laughs. “There’s a lot of $100 bills in the cash register.”

AlphaGraphics Denver also serves the non-profit world, in particular, a few causes close to Rothschild’s heart. “I used to sit on the board of the Foothills Animal Shelter in Golden,” he explains. In addition to being its print provider, Rothschild and his family have adopted three dogs from there.

“We’re also a major sponsor of the National MS Society,” he says. AlphaGraphics Denver funds a bike ride called the MS 150, which raises about $4 million each year for those living with multiple sclerosis.

Pickles is the four-legged "poster child" for PosterDog.com.

A busy man, Rothschild sits on the Planning Commission for the City of Arvada and the board of the Colorado Sales Tax Coalition. Through the International Franchise Association, he works with legislators on issues regarding the National Labor Relations Board. Rothschild also sits on the National Leadership Council for AlphaGraphics and the Customer Board for Ricoh. “It keeps me out of trouble,” he quips.

One of the dogs the Rothschilds adopted from Foothills Animal Shelter is now the official mascot of a tuck-in business, PosterDog.com. Pickles, a fawn French bulldog, came to the shelter in wretched shape and was eventually nursed back to health after multiple surgeries. Showing as much perseverance as her “dad,” today, Pickles keeps busy writing blogs and keeping the staff in line.

PosterDog.com, powered by AlphaGraphics, is an online ordering system for custom posters and gallery-wrapped canvases. It even offers prints on metal. Although the work coming through the site is miniscule compared to its parent business, Rothschild explains that the learning experience has been invaluable. “The marketing tools we’ve had to develop ourselves have helped us get into the e-commerce world,” he says.

Such pragmatism is what helps AlphaGraphics Denver stay ahead. “It’s nice to be a leader within AlphaGraphics, a franchise that itself is at the forefront of the printing industry,” he says. “So, we try to keep ahead of the pace.” PI