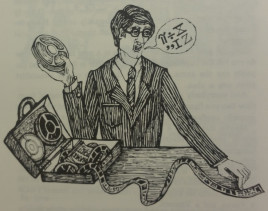 Here's the next installment in our continuing series of republished "Otto's Night Watch" columns by Otto Boutin, which appeared monthly several years ago in Printing Impressions. If there's a lesson here, it's the necessity to evolve your skill sets to keep pace with technology. But, with that said, industry change doesn't always occur as fast as many people might think. Just look at how many years longer it took for digital printing to gain a stronghold over offset printing — much longer than industry pundits predicted. And, while digital printing, especially inkjet, is obviously the future and where the majority of R&D dollars are being spent, the bulk of pages printed throughout the world are still produced on analog printing equipment.

The trouble with us old-timers is that we talk too much about the past. All right, then. Let’s talk about the future.

No. Let’s talk about the past.

Thirty-eight years ago a vigorous-looking man, slightly graying, walked into our composing room and opened his suitcase on the desk of Mr. Superintendent. He pulled out a yellow roll of punched tape.

“I’m Walter Morey,” he introduced himself. “I’ve been running a Monotype with tape for many years. Now I’ve invented an attachment which will eliminate the linotype operator.”

Mr. Superintendent looked at me, sitting behind the keyboard, straining my good ear towards the conversation.

“There’s one operator I’d like to get rid of,” he said, jerking a thumb in my direction. “But you forgot one important thing, Mr. Morey. Take a look at our paper. It’s not English. It’s Bohemian. We’ve got 15 lower case accents scattered around the keyboard and 15 caps in the pie tray, not to mention the asterisks and cap X’s, which also run pie.”

I got up from the machine and joined the men at the bench. Profoundly, I pointed out, “We also have a couple of umlauts when we set the Slovak dialect, and an o with a roof over it.”

Morey, the inventor of the teletypesetter, disconsolately put the tape back into the suitcase.

“I might as well try the Chinese newspapers,” he said. He didn’t waste any more time on us. He had a great many print shops to visit, trying to sell his idea of a teletypesetter.

Our own Mr. Superintendent was working on a quadder. The jaws were activated by lead weights attached to piano wire. He made a mistake by trying to keep the price under three hundred dollars. He didn’t realize that people would be willing to pay two thousand dollars for a good one.

All of these minor inventions were intended merely to increase the efficiency of the operator.

The teletypesetter, however, was in the category of the atom bomb. Its object was to eliminate the operator. 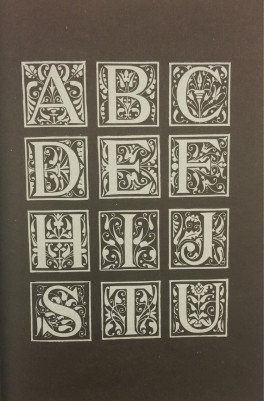 I was one of the panicky ones. I had been quite settled, with 10 years of experience at the trade, when I saw the tape for the first time. It worried me. I realized I had to find some other way of making an easy living.

I went back to night school to take lessons on how to be mayor of Chicago, like Tony Cermak did, so I’d have a job to fall back on then I got eliminated by the darn tape.

On summer week-ends, I pushed a little hotdog wagon outside of White Sox Park, building up a business so I’d have something to fall back on when I got replaced by the darn tape.

I put a down payment on a small pecan stand on U.S. 1 near St. Augustine, hoping it would keep me alive during the winter months.

Down in Havana I went into partnership with Senora Hermina, who owned a Palace of Pleasure near the yacht harbor. We wanted to open another establishment at Varadero Beach which was becoming popular with American tourists. We planned to buy, eventually, a tropical island a few miles offshore and call it the Garden of Eden. We would charge plenty for letting people make fools of themselves.

It would be something to fall back on when I got replaced by the darn tape.

But Fidel Castro changed our plans. Senora Hermina stayed in Havana, quite confident that she would get a position in Castro’s cabinet, probably as Minister of Culture. I went back to Miami, where a letter from Chicago was waiting for me at the post office.

“Dear Otto,” it said, “I regret to inform you that you have not yet been replaced by tape. Come back to work, you bum. Your Ex-Boss.”

I didn’t answer right away. I had planned to take a stroll along the coast of Spain from Malaga though Cartagena and Valencia to Barcelona. From there I’d walk to Marseilles and along the Riviera to Genoa. Of course, I’d visit Florence and Rome and Naples, but I really wanted to spend a lot of time in Albania, where tough mountaineers eat onions like apples.

However, I went back to Chicago...and from one city to another...one machine to another...waiting...patiently waiting to be replaced by that darn tape. To keep out of mischief, I learned to run an electric typewriter. Just in case...

Come to think of it, there is only one way to get along with these modern inventions. A person has to make his own adjustment.

Five centuries ago Gutenberg created a similar problem. His method of printing books with movable type took the jobs away from thousands of scribes who had earned their livelihood by handwriting one book at a time, letter by letter. It was a miserable form of labor that they were doing, but they resented the change. They hated Gutenberg.

The more adaptable ones, however, threw away their goose quills and learned to set type. There was a great demand for typesetters all over Europe because everybody was eager to buy books, not that they were cheap.

When Mergenthaler’s first machines made their appearance, 70 years ago, they were not greeted with affection by typesetters. Although the craftsmen worked 60 hours a week for a miserable living, with tuberculosis as a bonus, they resented the machines that threatened their livelihood. The machines were ridiculed and the operators were ostracized because each of these “piano players” was throwing five of his fellow men out of work. But again, some of the more adventurous men quit grumbling and sat down to learn to punch the keys. And they liked it.

The strange part of all this ancient history is that today, after 35 years of the Teletypesetter, there is still a great demand for a Linotyper. And there is also a demand for the typesetter who is an expert at setting by hand. And strangest of all is the fact that even the medieval scribe would find a good job in this modern age. With his skill at calligraphy and ornamental lettering, he could walk into almost any advertising agency and name his price.