It is well-known that 2020 was very good for some printing segments: packaging and direct mail, specifically, come to mind. For others, for instance those companies that primarily serve events, such as concerts, festivals, and trade shows, the strong downturn was profound and prolonged. It is in this reality that Printing Impressions presents its 2021 Fast-Track companies that appeared among the 2021 Printing Impressions 300 list of the largest printers in the U.S. and Canada, ranked by annual sales..

The summary of Chicago Print Group that follows recognizes this company as a “fast- track” firm that has weathered the recent storm in its own way, and its insight on business and industry trends can serve as a “north star” for companies looking to navigate themselves toward a safer harbor.

Chicago Print Group was founded in the summer of 2013, says company co-owner Paul Denst. Denst came from a graphic communications background, having worked for both commercial printers and supply-chain-focused firms. The company was founded, and is still broadly operated as, a wide-format graphics producer. It has a broad array of wide-format technologies on its production floor, including an Inca Onset X high-production flatbed printer, an EFI VUTEk GS3250LX Pro hybrid printer, and a Kongsberg digital cutting system.

In addition to wide-format capabilities, the shop also runs a Xerox Versant 3100, which can be used to both fulfill a wider range of customer needs, to move some smaller-format jobs off its wide-format units, or to produce shelf strips or “wobblers” for use in retail settings. 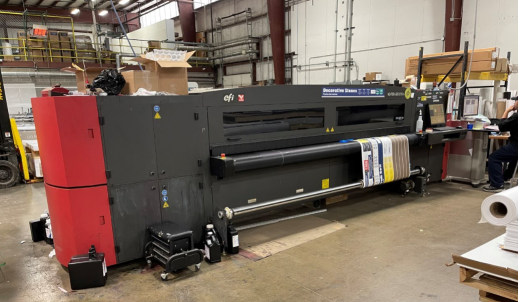 As a move into the “next thing” for the company, Denst says the Chicago Print Group is just about to install a new Telios G5 dye-sublimation inkjet printer, and an automated system to aid in the production of silicone-edge graphics, including those that are backlit. To date, says Denst, the company has been offering these products through partnerships instead of producing them in-house.

Diversifying the Customer Base To Help Drive Further Growth

Asked about the excellent year Chicago Print Group experienced, Denst believes the company was well-positioned for success. “Our primary client base is home improvement stores, clothing stores, and phone carriers,” he says. “Most were open during the pandemic.”

Further, several big-box companies used the pandemic as a time to rebrand and chose to spend marketing dollars toward refreshing the look of their stores. As a result, Chicago Print Group produced graphics for retail stores across the U.S. Installation was then handled by a nationwide installation company.

As a key business takeaway from the pandemic, Denst says he will continue “to diversify the client base,” noting that his company has always worked in more than one sector. In addition to its big-box retail clients, the company serves the agriculture market, for which it largely produces field signs. It also produces graphics for food delivery services. 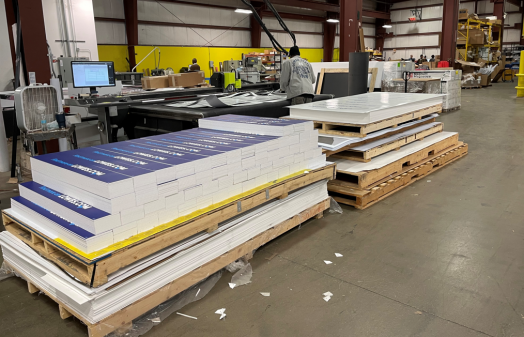 Regarding current labor and materials issues, Denst reports having to work harder and wait longer for needed materials. In some cases, this means having to explore alternatives with customers. While Denst says he hired quite a few skilled people in late 2020/early 2021, a current staffing challenge is with unskilled labor for kit packing: it is difficult to find people and he must pay much more per hour.

Looking forward, Denst says Chicago Print Group will continue to invest in technology, both to stay competitive and to become “a one-stop shop” for its customers. While he sees supply and labor shortages as short-term barriers to continued success, he says a bigger challenge has been in gracefully managing the company’s rapid growth.