Environmental Graphic: You Have to Feel This Wallcovering to Believe It

Creating a visually attractive and inspiring workplace is something that the team at Suttle-Straus in Waunakee, Wis., knows a few things about. The commercial printer has done some unique projects using environmental graphics that have not only stretched the depths of the imagination, but have created engaging work spaces.

According to Maeghan Nicholson, marketing manager at Suttle-Straus, companies are starting to realize the benefits of having a visually attractive and inspiring workplace and how that helps to attract talented workers, especially millennials. "Use of artwork and imagery can help to inspire creative thinking. Having a pleasant work environment can also improve employee productivity and satisfaction."

A 'Medieval' Look with an Environmental Graphic 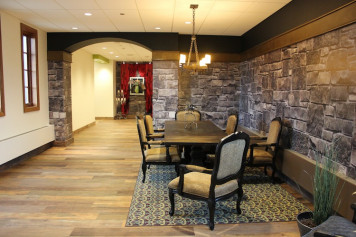 The client liked the environmental graphic so much that it decided to add the wallpaper to various hallways. (Click image to enlarge)

When a software firm wanted to bring the look of the stone exterior of its building into its interior without using real stone, Suttle-Straus was happy to meet the challenge. Charlie Maring, a sales representative at Suttle-Straus who worked worked on this project, notes that the printer extensively photographed the stone on the outside of the client’s building. Then, the art director at Suttle-Straus created a large repeat.

The team then used printable digital wallcovering media from Korographics and output the design using two EFI VUTEk GS3250LX Pro wide-format roll-to-roll printers equipped with LED curing technology, and then applied the graphic to the inside walls and pillars.

“We took multiple shots on a day when the shadowing on the rock was just right, because that's part of what makes it look real,” says Maring. “Our art director then stitched the images together and created a repeat. We made it large enough that you can’t tell where the next repeat is.” 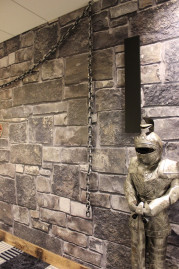 A Medieval knight is perfectly placed, with the stone-look wallpaper behind it. (click image to enlarge)

Since the customer liked the results so much, Maring adds it ended up adding the wallpaper to several other places in the building, as well as on walls in other buildings. “The client has 15 buildings on its campus, and they are all connected by tunnels. So, they even used some of the wallpaper in their tunnels.”

Maring says the project took about three weeks to complete.

Commenting on the finished piece, Nicholson adds, "Custom environmental graphics allowed this client to create a completely immersive environment around their theme."

Does Your Office Still Have Grey Walls and Cubicles?

Installers to Gain New Skills at the Expo