When David D’Andrea started his litho company in 2005, his vision was to create a commercial print shop that, he notes, would someday hit around 20 employees. He jokes that printers should be careful what they wish for — today, D’Andrea is the CEO of a $25 million, 150-person operation in Cypress, Calif., which is getting ready to open a second location in Las Vegas, with offerings that span far beyond offset printing.

The journey into becoming a marketing service provider didn’t happen overnight. D’Andrea explains that the evolution really began in 2013, when he added grand-format printing equipment to his mix, allowing him to expand the types of services he offered, and to go after a much wider range of potential clients. In particular, that combination of technologies allowed him to find a great deal of success in the exhibition space, where the growth potential is so significant, which also has led D’Andrea to open the second operation in Las Vegas.

“The opportunities in Las Vegas became apparent,” he says, stating that what prompted him to ultimately take the risk of opening a second production facility was the fear of standing still.

“It’s a calculated decision — our exhibit customers asked us, once we’re in Las Vegas, if they can give us more work,” D’Andrea adds. “We’ve seen a lot of growth on the exhibit side, so I am going to take the opportunity to get a foothold in Vegas, and continue finding other areas of growth in that market, as well.” 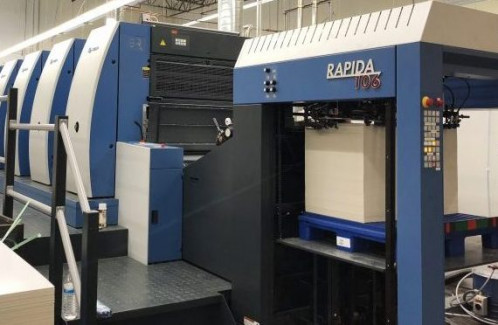 Once the new location is up and running in September, D’Andrea notes that he will have around 120,000 sq. ft. of combined manufacturing space. There will be  a full array of options, from the eight-color, 41˝ Koenig & Bauer Rapida 106 UV sheetfed offset press he installed in his Cypress location in 2017, which gave him automation and fast speeds for his offset work, including specialty packaging; to grand-format and dye-sublimation printers from EFI and HP that will be installed in both locations, giving D’Andrea not only increased capacity, but the added redundancy that he feels is an important step in his company’s growth.

In addition, both locations will have facilities for services such as metal fabrication, with D’Andrea Visual Communications offering not only the printing side of the puzzle, but also the ability to build frames and structures to house those custom prints as well.

For D’Andrea, growth has been about more than just expanding to new locations, however. He has embraced the concept of industry convergence in a major way, seeing growth opportunities in a wide range of complementary marketing and communications services.

One such business he is starting to explore is the packaging space. “Nothing too extravagant,” he says. “We’re not taking over the world. We’re going slowly with it.” D’Andrea Visual Communications has found success offering specialty packaging options, especially for some of his higher-end customers in industries such as entertainment or music, where offering unique and exclusive versions can be a lucrative marketing approach for many brands.

Examples of that type of work, according to D’Andrea, include doing special packaging for products given out at the Emmys, a special package for Metallica’s “ ... And Justice For All” album, as well as a package for an exclusive Led Zeppelin pin released along with the band’s albums. “I’ve been really grateful to work on some of these projects,” he says.

Beyond print, D’Andrea also sees value in being the content creator. “On the technology side, I see a lot of growth opportunity blending static images with other types of video content,” he notes. That includes offering services such as video production, which, he explains, the business does offer today, but on a limited basis.

“We are already able to produce it in-house, but I am a bit of a perfectionist,” he admits. “I want to be able to streamline it, perfect it, and be able to measure it to feel comfortable releasing [the service to his wider customer base], and doing it on a daily basis.” Right now, D’Andrea Visual Communications is working with select customers who specifically request or need video, but that will change in the near future.

3D printing is another technology D’Andrea is watching, although he admits that while he finds it “unique and exciting,” he just isn’t seeing a large call for it yet — not enough to justify an investment, at any rate. That could change once the technology and demand move away from the one-off, very customized projects to a more mass-produced approach. But, for now, D’Andrea says, “we just haven’t had a big calling for anything that would push us down that path.”

That said, one of the keys to the company’s success has been not necessarily being the early adopter for the latest and greatest technologies, but investing at the right time, when the hardware, software, and demand all converge.

“We want to make sure our investments are accurate, on point, and timely,” D’Andrea says. “We don’t want to get too far in front of ourselves, so we focus on where it will need to be in five years, and where the manufacturers are putting their R&D resources. That’s what I like to keep my eye on.”

The result of that investment strategy is an ever-growing and diverse service mix that can withstand whatever the future may bring, D’Andrea believes. “Markets have ups and downs. We lost a lot of players in the 2008/2009 [economic] downturn — I want to be ready, to have a plan to withstand any storms.” 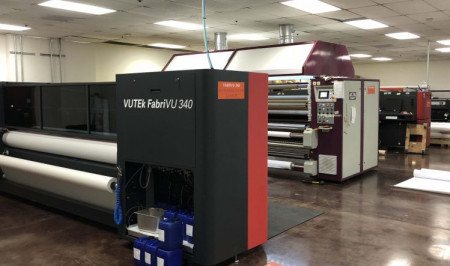 Printing for trade shows and exhibitions is a big part of D’Andrea’s business. An EFI VUTEk FabriVU 340 digital fabric printer is being used to produce graphics jobs in a range of sizes.

The wide range of services D’Andrea Visual Communications offers is advanced by what its clients need. “The quality of our printing is what they are expecting — I started off in this business just thinking if you printed well, you will have a good operation. And that has led us down a long path. But having the diverse range of services makes a big difference in a client’s ability to continue to use us on their larger, more complex campaigns.”

By steering his company into complementary marketing offerings, D’Andrea notes he is just “staying on top of where the market takes us.” While younger generations, he says, grew up with all technology, he is starting to see them migrate back to print for things such as news, or brochures when buying high-end items such as cars.

“The landscape has changed,” he adds, “but, in the greater sense, we are continuing to produce print, and there is still opportunity there.” D’Andrea recognizes, however, that print is just one portion of the broader strategy for modern-day brands. And by ensuring he can produce whatever might be needed, in whatever medium might be required, D’Andrea Visual Communications remains the first and only call every time a new campaign emerges.

“We’re doing our best to work with clients and help them achieve the results they are looking for, and doing it in a timely manner,” he concludes. “There are opportunities out there. You just have to hunt them down.”

For D’Andrea Visual Communications, the convergence of multiple services comprised of branding, content, printing, and more has paid off in a measurable way. At the recent PIASC Print Excellence Awards — the Southern California affiliate of Printing Industries of America — the marketing service provider took home 14 honors, including the grand prize: “Best of Show” for its work on the media kit for The FX Network’s “Mayans M.C.” television show.

The project combined all of the various technologies D’Andrea Visual Communications offers. “We used a combination of both litho and grand-format printing to create specialty packaging for this piece,” says David D’Andrea, CEO. Other elements included a leather belt for the closure of the piece, and a canvas-printed, foam-stuffed cover that simulated the blanket rolls of the handlebars the Mayans use in the show.

Also taking home a wide range of awards was the media kit for “Pose.” D’Andrea Visual Communications used techniques such as cold foil, a glitter UV coating, and even feathers and specialty inks, to honor the performance artists who star in the TV series, also from FX.

Finally, the media kit for FX’s “Legion” series was recognized for several awards. It made use of lenticular effects to help convey the schizophrenia the main character suffers from. The cover was printed on a holographic foil, and several high-end, specialty stocks were used throughout the piece to help bring it to life.

“We’ve got a young group of very talented people working for us,” D’Andrea says. “They felt these products were good enough to win awards, and were worthy of entering. It is always very exciting to know that the work you’re doing is consistent, and is well-received by your peers.”

As D’Andrea Visual Communications continues to grow and expand beyond the printed page, there is no doubt future projects will continue to push the limits of creativity and technology. Printing, packaging, content, and more, all blend together to create seamless campaigns that capture the imagination.