Digital Printing: Addressing All of the Bottlenecks in Finishing

Inventor Ron Popeil was a master of the infomercial, and was able to create compelling, memorable messages to highlight his many products. Of particular note was his “Showtime Rotisserie and BBQ,” a device that was rather hyperbolically sold with the tagline, “Set it and forget it.” If only print production was that easy ...

Despite our hopes that Popeil’s tagline will extend into our printing processes, reality generally differs. While the goal of process workflow is a smooth, frictionless path from inception through delivery, bottlenecks in digital print production are a moving target, the locations of which are dependent on factors including technology, staffing, software, and training. When one element of a process either speeds up or slows down, it can directly affect other process steps and complicate that smooth-flowing ideal.

Digital printing has delivered profound change to the commercial printing sector, and has truly changed the playing field as to how printing is specified, executed, and consumed. For the purpose of this article, digital printing has served to drive down run lengths, resulting not in less printing, but instead in more jobs of shorter length. This profusion of digital inkjet- and toner-based jobs — each with their own finishing needs — has resulted in finishing bottlenecks in many production facilities.

The purpose of this article is to examine the nature of these bottlenecks, and explore the steps printing companies are taking to address them.

Kevin Kiernan, GM of All Color Printers, has witnessed the push toward smaller runs. Not only has this served to supply PSPs with more (though shorter) jobs, the shorter run lengths have also made many more small-sized printers competitive for the work. This makes the need for competitiveness and efficiency even more profound. The company, located in Deer Park, N.Y., focuses on commercial printing and box work. Its finishing capabilities include cutting, folding, stitching, and gluing. 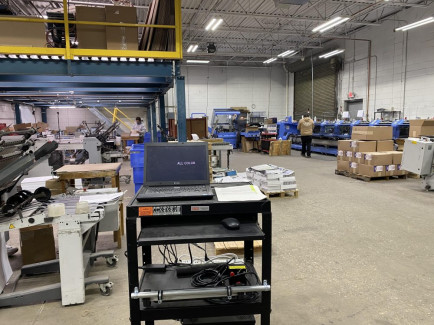 At All Color Printers, a static control bar has been installed to control misfeeds in finishing.

In the quest to stay competitive on smaller jobs, All ColorPrinters added a slitter/cutter/creaser, as well as folding equipment, to handle finishing in-line. They have also compensated for the slipperier finish of their toner-based output by looking into equipment belting. Another factor causing finishing bottlenecks was static electricity. Ionization is now used to limit static, thus minimizing the possibility of static-associated misfeeds. This is particularly important, Kiernan says, for the company’s variable data jobs.

Further, All Color Printers noticed that, due to the movement of the sheet through the digital press, it was difficult to get a squared edge, which has resulted in challenges to accurate finishing. The company now back-trims stock before it is put on-press, thus minimizing or eliminating potential problems.

Looking forward, Kiernan would like to further automate the company’s processes, and would be interested in integrated technologies that can effectively assemble booklets, pull covers and pages, trim, and visually follow the piece through the process to ensure quality. The goal, he says, would be to minimize extra handling and the challenges associated with a station-to-station approach to print production. In some cases, acquiring the technology comes down to a significant capital investment, and in others, the technology is yet to be mainstreamed.

Specializing in postcards, brochures, and letter-work, PostcardMania, of Clearwarer, Fla., runs both analog and digital printing processes, and has finishing capabilities including cutters, folders, and inserters. The shop handles jobs of as little as 10 sheets and as large as thousands, and includes variable images, variable data, and customization among its printing capabilities. To increase efficiency and profitability in printing, the PSP strives to batch its jobs whenever possible.

Currently, the finishing operations at PostcardMania are mostly manual, COO Anthony Heald says. While the company has looked into in-line finishing options, it also recognizes that a significant investment in both equipment and personnel would be required to put the systems in place. The answer to if, or when, PostcardMania should make an investment is in the details of the business itself. Heald says it’s a balance between investment and growth.

Heald states that while the company does not have set metrics to measure the efficiency of its finishing operations, it carefully analyzes costs to determine what is most efficient. He says that, for the time being, finishing is running smoothly, which makes it difficult to find the right time or the prime motivation to make the investment in higher-level, automated solutions.

He adds that an emerging challenge in print finishing is finding quality bindery employees who are already trained. The company instead must bring in inexperienced workers and train them.

Looking to the future, Heald, like Kiernan, sees the promise in integrated, automation solutions that can, for instance, address the whole production process. This could include printing from a web, then slitting, cutting, and inserting — all integrated. “That would be phenomenal,” Heald says. In the nearer term, the company is looking into a slitter, with the purpose of making production more seamless and efficient. “Achieving quality is not an issue for us,” he adds.

Another challenge specific to PostcardMania is facilities-focused, as the company’s digital printers and finishing technologies are located in different buildings, resulting in a 100-yard movement of materials from the printer to the cutter.

For commercial printers facing the need to eliminate finishing bottlenecks by acquiring additional equipment, Heald recommends careful preparation, stating that investments are expensive and PSPs must have the volume to justify them. “Much of it is dependent on the company and its situation,” he adds.

One of the biggest production challenges resulting from digital printing, Tony Littleton, VP of manufacturing for ABCO Printing in Dallas, reports, is the presence of equipment-focused pricing structures that involve “click charges.” In an effort to avoid these per-sheet costs, the company works to maximize sheet space, usually ganging different jobs on the same page.

A key metric ABCO uses to determine whether this strategy is being used in production is to aim for 95% of its digital color jobs being printed on 11x17˝ sheets or larger. While this strategy is great for cost control, it creates a strong opportunity for finishing bottlenecks, particularly in cutting.

In order to address and even eliminate these bottlenecks, ABCO — which primarily prints items for training documents, product manuals for medical devices, and elements for aviation accounts, using a mix of offset and digital presses — maintains a strong commitment to efficiency and utilizes the strategies of continuous improvement.

As a result, the company’s finishing technologies, which include saddle stitching, perfect binding, lamination, diecutting, and foil stamping, can all be operated by more than one employee. Through cross-training, printed items rarely “wait” for a singular operator to do the job. “It is essential,” Littleton offers, “to have no dead time in the process.”

Asked for an example of how digitally-printed output can contribute to slowdowns in finishing, Littleton referred to ABCO’s efforts to move into certain wide-format segments through the installation of a wide-format flatbed printer. ABCO did its research up front, and purchased a CNC router/cutter at the same time the flatbed was purchased. 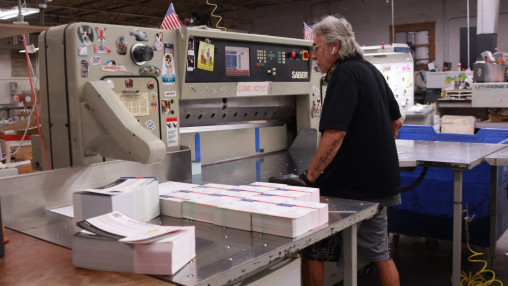 ABCO Printing’s commitment to efficiency keeps finishing processes like cutting moving, despite a profusion of jobs.

He says he is often puzzled to see companies buying flatbeds without a volume-based plan to trim or finish the rigid boards that come off them — a bottleneck in the making. The concept here is that finishing is not some sort of an add-on, but instead an integral part of the process. This fact is relevant to all printing disciplines and technologies.

When asked what advice he would offer other printers who are struggling with bottlenecks in finishing, Littleton says he would urge them to look toward a root cause. “I would ask them to name the problems, including where and what they are. Generally there is one problem that stands out, and that’s where they should start.”

He also highly recommends getting employees involved in the location or creation of the solution. “They know better than we [in management] do,” he says, “and they want the process to improve.” Littleton also highly recommends a “2 Second Lean” approach, which focuses on locating and saving small amounts of time within processes. Those increments of time add up, and can, as a result, minimize the severity of production bottlenecks.

Two additional approaches that can help control bottlenecks in digital finishing require companies to assess the very core of the business, and to consider elements of the corporate philosophy. The first is to understand the way individual changes can affect the process as a whole, and then make strategic steps to proactively address them. In doing so, companies may limit the “surprise” of certain bottlenecks, keep them from moving around within the process, or prevent them altogether.

The second is choosing to nudge, when possible, customers toward more standardized products — a step that can minimize the number of time-consuming adjustments needed in bindery and finishing.

This is most possible when finishing steps are basic services, and not value-adds. This strategy, similar to minimizing paper changes on press, can bring incremental time savings, thus minimizing the effect of production bottlenecks.