“With the XL 75, the cost of production has really dropped,” says Bill Schultz, Owner of Diamond Graphics. “We can translate that to our customers as well — it makes us more competitive when quoting jobs.” 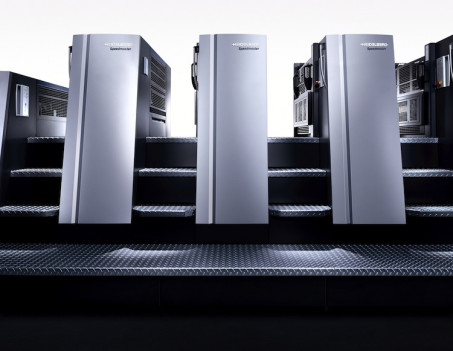 The Speedmaster XL 75 is equipped with Prinect Axis Control.

Every year, Diamond Graphics produces over 500,000,000 cards in a variety of different forms including loyalty cards, hang cards, gift cards and promotional cards. With this large demand, Diamond Graphics needed a press that was equipped to print large quantities quickly. With the shortest makeready times in its class, the Speedmaster XL 75 has the highest degree of automation and offers incomparable productivity. Diamond Graphics’ XL 75 has maximum production speeds up to 15,000 high-quality sheets per hour.

“With significantly faster makeready times, the XL 75 has really increased our throughput and given us additional capacity,” notes Schultz. “This has given us more press time to sell. We expect to see an increase in sales moving forward.”

The Machine Any Pressman Would Want To Run

With improvements in productivity and efficiency, the machine is making a huge impact company wide. The use of Intellistart, the operator guidance system, allows the pressman to queue up jobs and get them done quicker. Additionally, thanks to UV, there is no wait for the sheet to dry and go onto postpress.

“I started as a pressman, and I would love to run this machine,” relays Schultz. “It’s really impressive. It’s a dream.”

“Another factor in selecting this machine was service,” adds Schultz. “We knew the quality would be higher with better makereadies and better speed. We also knew Heidelberg would be right by our side if we had any problems.”