HAGERSTOWN, Md.—August 7, 2015—On a beautiful, sunny day in western Maryland, Cosmo Films' company representatives and customers came together for the grand re-opening tour of Cosmo Films’ manufacturing facility located here. The day started with a history of Cosmo Films, and a look back at the 1996 inauguration of the Maryland plant.

The company, which began in 1981 in India, specializes in Bi-axially Oriented Polypropylene (BOPP) films, boasting 10 BOPP Supreme lines in four plants, four coating lines, and eight extrusion-coating lines in three countries including the United States, India and Korea, with a fourth base in the Netherlands.

After a brief history, Ed Dorsey, vice president of sales, walked the group through the $1 million upgrade to the facility. The upgrades, mostly electronic, have made the plant more efficient, in turn lowering costs both internally and for customers, which is echoed in the company’s philosophy: “Quality First, Customer Supreme."

The Maryland facility is capable of producing all of the company’s thermal lamination films, including the Lay-Flat film line invented by Cosmo Films. “It’s like a sponge,” Dorsey explains. As paper swells from additional moisture, the film absorbs the moisture, eliminating any potential curling.

Equipped with safety glasses and earplugs, the group was then led on a tour of the working facility. The first stop took the group into the sunshine to see how adhesive pellets are transported to the facility and stored in silos capable of holding 200,000 pounds before traveling inside to the extrusion coating line. The pellets are heated to 450 degrees Fahrenheit to form the adhesive, which is then bound to the laminate film between temperature-controlled rollers. A computer unit near the line controls everything from the laminate mixture to the die for thickness. 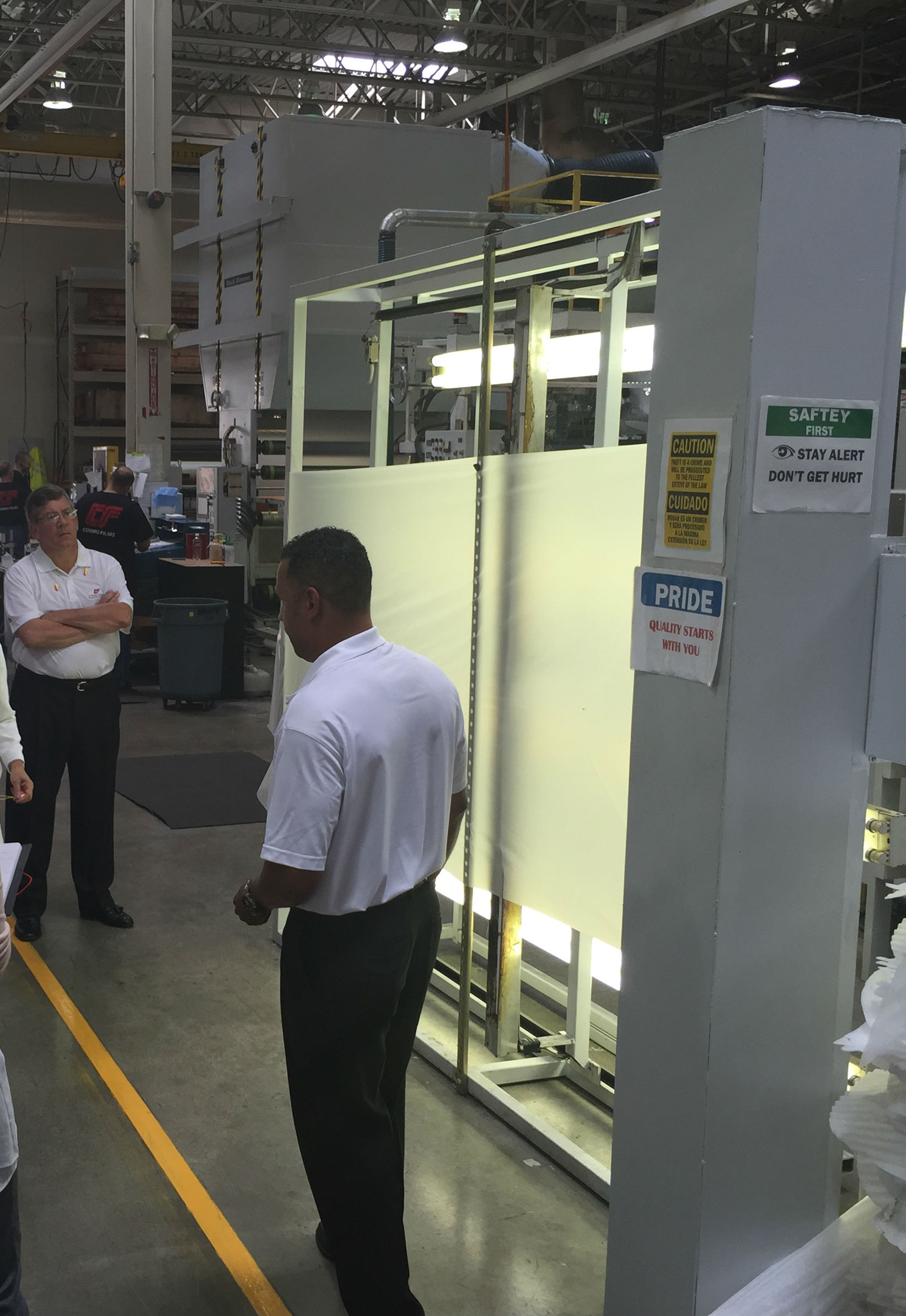 A few steps from the extrusion line, the group was given a demonstration of the rigorous testing the jumbo rolls go through to ensure the film meets Cosmo Films’ quality requirements. Ten feet of each roll goes through vision, light and heat tests to look for defects. A second demonstration was given on the CF 6300 laminating system, where an 11x17˝ image of hot air balloons was laminated with oriented polypropylene, producing a perfectly glossy finish.

When the facility tour ended, the group headed to a presentation given by John Carter, the owner of Autofeeds Inc. The company develops and provides lamination and diecutting equipment in both high-speed and more economical, lower-speed options to meet a range of industry needs.

Although the group didn’t venture to the company’s distribution warehouse, which is approximately three miles from the manufacturing operation and houses some of the approximately 10 million MSI produced per month, the group was not disappointed with the final stop of the day.

After an hour-long bus ride, attendees arrived at a beautiful winery in Virginia for a night of live music, delicious food and, of course, fine wine. The president of U.S. operations, Sandeep Dutta, put it simply and eloquently when he said that, after all the successes that the company has experienced, the best thing to do is celebrate. “After all, you only live once.“

Related Content
Stone Paper and the Markets Where It's Well-Suited