Louisville has a long tradition of showcasing the best-in-class. Since 1875, the Kentucky Derby has been held there, and the Coral Graphics team, a leading printer and subsidiary of the Bertelsmann Printing Group, likes to quip that it offers the same high quality and speed of those thoroughbreds running in that premier race. To maintain its leading edge, Coral Graphics has made a variety of investments at its centrally-located 100,000-sq.-ft. facility in order to supplement its portfolio with high-quality finishing solutions and in 2019 invested approximately $2 million in a number of new machines for the Louisville site, which serves the publishing, healthcare, packaging, and home entertainment markets. 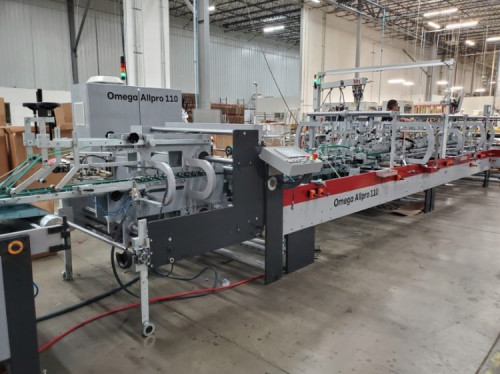 In recent months, for example, the Louisville team has bolstered its post press department with a number of new machines, including two ultra-modern Omega carton folder/gluer machines with hot and cold glue application: an Omega Intro 110 and an Omega Allpro 110. Additional investments have been made in a saddle stitcher, several folder units and stackers, two automated cutters, a collator and booklet maker, and new packaging machines. The team in Louisville is hiring new members too.

“We now have more powerful and sophisticated machines than at any time in our history,” says Coral’s General Manager Mike Murray. “That makes us 20% faster and better, because we have more control over the whole production process. Our customers benefit from that locally, and so does our entire network.” And the new equipment provides a further advantage: In the recent past, Coral Graphics Louisville has been allocating finishing work to external service providers from a budget of about $10 million per year. With the new machines, these jobs can now be performed in-house.

Coral was extremely pleased with the quick installation and training for its two Omega machines. The folder/gluers are producing straight line, double wall, crash lock and optional four- and six-corner with single finger servo fold for high speed precision as well as inner partition, Z-fold, conical crash lock and CD boxes at a maximum belt speed of 400 m./ min. for the Allpro and 300 m./min. for the Intro. Both Omega folder/gluers handle a wide range of substrates from carton board to corrugated, are extremely versatile and capable of producing the most complex range of carton styles, which minimizes makeready and maximizes productivity and profitability. All Omega gluers are equipped with touch creen control panels, and modems for diagnostic purposes that are designed for strength and reliability.