No one ever said that digital printing would be a magic bullet for converters of labels and packaging. But with patience and care, it can be made to hit the desired targets. 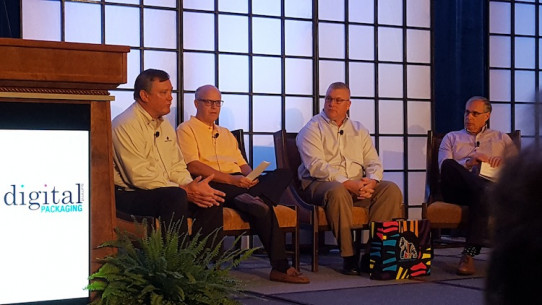 When a converter adopts digital printing, it does more than just bring in a new device: it confronts significant changes to the ways in which it is accustomed to producing and selling packaging and labels. At the recent Digital Packaging Summit, hosted by Printing Impressions' sister publication packagePRINTING, representatives of three prominent converters spoke candidly about how they turned the experience into one of change for the better.

The panelists, moderated by Kevin Karstedt (Karstedt Partners), first addressed motivation: the factors that impelled their companies toward digital in the first place.

Customers asking for things that weren’t ideal for production on conventional equipment was what prompted the Constantia Flexibles Label Division to invest in digital printing, said Doug Bartlett, head of graphics and print technology.

Boutwell Owens made the move to digital once it was convinced that it had a sufficient volume of short-run work to justify purchasing a digital press instead of continuing to send those jobs outside, said Bill Lorenz, VP of operations.

Chuck Slingerland, director of digital printing at Abbott Action, said his company’s decision was driven by a desire to stay competitively ahead of other corrugated converters in its region.

An initial concern, Lorenz said, was whether digital color would match what Boutwell Owens was used to getting from its nine- and 10-color flexo presses. But, the company has found that “we can hit almost everything we need” within the gamut of digital device, having been obliged to make a special color for it only once in three years.

According to Bartlett, Constantia Flexibles spent twice that number of years researching and preparing for its digital investment. “You think you’re ready for it, but you’re never ready for it” until you have installed the press and begun running live work on it, he observed.

Like Bartlett, Slingerland recommended appointing a “champion” within the company to oversee the adoption of digital. It helped, he said, to have everyone who would be working with the new press at Abbott Acton take part in its installation.

A focal point of the discussion was the difficulty that conventionally equipped converting businesses often have in learning how to sell digital output. It isn’t always easy, Lorenz said, for salespeople with analog backgrounds to grasp the different value proposition that digital printing offers their customers.

The first thing for a sales team to understand, said Slingerland, is that digital output should never be sold for less than what it is worth.

“We can’t use our existing quoting mentality” when selling digital, Bartlett declared. “It’s not cost plus - it’s the value it will bring.”

Lorenz noted that some salespeople are quicker than others to grasp that selling digital short runs can open doors to orders for high volumes of conventional print. But, customers may need education as well, and there may need to be a change in sales strategy to go along with it.

Lorenz said the message to customers used to “always buying in the thousands” should be that now, digital lets them buy smaller quantities without worries about obsolescence or waste. That advice, however, may have to be offered to decision-makers higher up in the chain of authority than the procurement department, he indicated.

Learning and implementing best practices for digital printing takes patience, the panelists agreed. Slingerland said that after putting considerable time and effort into launching its digital operation, his company “took the training wheels off” only to discover that it wasn’t getting the results it had hoped for.

That led to a soul-searching in which Abbott Action “questioned everything” it knew or thought it knew about digital production. The results, said Slingerland, included an overall improvement in performance, a major order from a household-name retailer, and awards for the high quality of the company’s digital printing.

Asked by an audience member what they would like to see digital processes do better, the panelists identified printing speed, format size, substrate interaction, and production workflow as areas for the digital press manufacturers to keep working on. They also talked about how to resist commodity pricing and how to avoid losing money when repairing bad files in what one audience member described as “those one-time, $350 jobs.”

The final question was the what-keeps-you-up-at-night query, which Karstedt gave each panelists only a few seconds to answer:

Bartlett: “sales, or the lack of it” (self-explanatory).

Related story: Hybrid-Flexo/Inkjet Printing Will Bring Best of Both Worlds to Packaging

Digital Printing for Packaging - What Do the Numbe