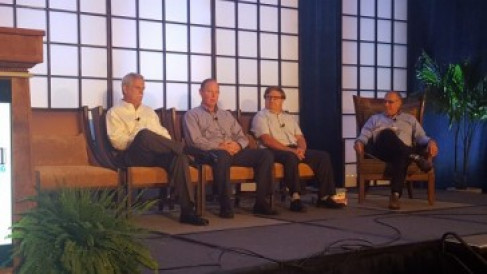 Most of what commercial and packaging printers produce is intended, in one way or another, to support  brands.

In an October 24 session held during the Digital Packaging Summit, hosted by Printing Impressions sister publication packagePRINTING at the Ponte Vedra Inn & Club in Ponte Vedra Beach, Fla., production executives of three brand-owning companies explained what that support entails and how they thought providers of digital printing and finishing services could best contribute to brand promotion.

What Do Companies Expect from Packaging Suppliers?

Responding to a question from panel moderator Kevin Karstedt (Karstedt Partners), Patrick Poitevin, a senior associate principal scientist for Mondelez International, said that what his company - a leading producer of consumer food products - principally expects of its packaging suppliers is compliance with food safety standards. Mondelez also wants the converters it works with to be able to offer a complete spectrum of package printing and finishing services.

Ray Mass, a printing technology manager in global design and packaging for Colgate Palmolive, said that the 300 printers on his provider list have to undergo strict compliance audits if they want to remain there. Mass noted that although most of them have digital print capability, some of them could be doing a better job of promoting what they can do with their digital systems.

Calvin Osterberg, director of purchasing for Rochester Midland Corp., talked about the advantages of working with a printer that has come up with a solution for digitally printing the corrugated containers the company uses. Rochester Midland now gets its corrugated boxes on as as-needed, just-in-time basis, automatically placing orders for quantities that will last no longer than five days. Turning over carton stockpiles once a week, 52 weeks a year helps the company gain more control over its finished-goods inventories, Osterberg said.

The Value Digital Production Can Offer to Brands

According to Poitevin, one of the most valuable things digital production offers brands is "decomplexity:" its ability to take steps out of the production process, shorten the supply chain, and eliminate obsolete packaging. Getting rid of plate costs is another practical benefit, he said. Mass pointed out that with the help of small, customized packaging runs made possible by digital printing, brands can stay out of the trap of having to "cram a bottle of soap into a box with 42 other products" the way some online retailers do.

The proverbial "what keeps you up at night" question drew some interesting responses from the panelists. Osterberg said it bothered him that some digital label printers seem still have a conventional mindset when it comes to finishing. In the same vein, Mass noted that "designers aren't geared now toward digital" to the extent they should be.

Poitevin wondered how deeply packaging printers and converters are looking into next-generation digital technologies. His worry, he said, is that "I may be running faster than the majority of the supply chain" in this respect.

All agreed that emerging technologies will be good for brands. They were reacting to an earlier presentation by Rafi Albo, owner of SEGMARKETING, which specializes in turning packaging and labels into interactive experiences through the addition of augmented reality (AR) and virtual reality.

With the help of techniques described by Albo, said Mass, regionally targeted promotions can be more effective. Osterberg said his company has found that by placing user-scannable codes on its containers, "we can speak for ourselves now" instead of having to depend on distributors to communicate important product information.

Scannable content also could be an alternative to the specially prepared safety data sheets that Rochester Midland must include with shipments of its chemical products. "Wouldn't it be cool," Osterberg said, "if we could stop all of that printing, folding, and sending and just put that little digitized item on that case so that if there's any spill down the road or any question or any problem the customer has, all they have to do is scan it and it will have a person come up to them and talk to them about how to treat it."

Turning packaging and labels into digital gateways through techniques such as augmented reality will help to drive consumer engagement with branded products, said Poitevin, enabling brands to know where their customers are and what they are spending. His concerns, however, are that "everybody has so many apps" and that 90% of them aren't actively used. What's more, once a brand employs its packaging in this way, it must be prepared to reconnect with the audience by renewing the experience with fresh content.