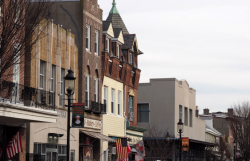 The small business owners of downtown Bristol Borough have a "passionate desire to change the town" and that’s what makes them different, says local resident and city leader Bill Pezza.

Deluxe, which provides marketing and other services to millions of small businesses, kicked off a nationwide call for nominations in Fall 2016, in conjunction with the premiere of season 1 of “Small Business Revolution – Main Street.” After receiving 14,000 nominations from small towns representing all 50 states, Deluxe named five finalists on Feb. 9: Bristol Borough, Pa.; Georgetown, S.C.; Kingsburg, Calif.; North Adams, Mass.; and Red Wing, Minn. From Feb. 9-16, the public was invited to view videos about each finalist and vote for their favorite town at SmallBusinessRevolution.org.

Each of the finalist towns rallied their communities, generating excitement locally and nationally, gaining support from celebrities, politicians, civic groups and media. Nearly one million votes poured into the Small Business Revolution website throughout the week. By winning the popular vote, Bristol Borough will receive a $500,000 revitalization in the form of marketing services, business advice, and other support and improvements. Efforts will be led by Deluxe’s chief brand and communications officer Amanda Brinkman, she will be joined by Deluxe’s small business marketing experts and Shark Tank's Robert Herjavec. The revitalization will be documented in an original online series debuting on SmallBusinessRevolution.org in the fall of 2017.

“We were astounded by the incredible response each of the communities had to the contest. The energy and creativity they brought forth to drive awareness and excitement for their towns was truly moving,” said Amanda Brinkman, chief brand and communications officer for Deluxe. “We heard from all of the finalists how this contest brought their towns together, instilling a renewed sense of pride in their communities and support for their local small businesses.”

Downtown Bristol Borough has been referred to as an "undiscovered gem" that they hope the rest of America will soon discover.

The small town of Bristol Borough, nestled on the Delaware River, was once the commercial hub of surrounding Bucks County, an area that has experienced its share of boom and bust. Midway between Philadelphia and New York, the self-described “gritty” town is experiencing a renaissance, driven by passionate town and business leaders. The Small Business Revolution aims to help revive Bristol Borough as a destination for tourists and residents alike.