MEX, Switzerland—December 9, 2015—Bobst, a family company based in the Swiss Canton of Vaud, is launching a year of events to celebrate its anniversary. Dating back four generations, the company was founded in Lausanne in 1890 and has managed to build an ambitious international economic project while remaining true to its roots and human values.

Bobst is embarking on this anniversary with its sights focused firmly on the future. From autumn 2015 to autumn 2016, it will hold a year of events running under the motto "125 YEARS: FOR THE NEXT GENERATION." Bobst has chosen this slogan first of all to thank its customers who have placed their trust in the brand for 125 years. It is also to pay tribute to its staff, whose enthusiastic work has given the brand’s products and services renowned excellence. This anniversary is a reminder that everyone has a part to play in laying the foundations that the company intends to bequeath to future generations, the cornerstone of which resides in customer satisfaction.

In addition to the graphic elements which are the visible signs of this anniversary, three key initiatives will punctuate this program of celebrations.

Customer events. The 125th anniversary will also feature in the company’s trade exhibitions, customer days and open days. In particular, Bobst will be commemorating its anniversary at the drupa 2016 and K 2016 international shows, which will be held next spring and autumn in Düsseldorf, Germany.

“BOBST – One Group around the world” On March 23, 2016, all Bobst staff will join together for a day celebrating BOBST’s 125 years. The celebrations will kick off in Japan and will end in Mexico, passing through each of the Group’s facilities during the day. This event, which is being organized in all subsidiaries around the world, will also be an opportunity to thank all who work there for their contribution to the success of the business.

Let us build our future together! 125 years of history and innovation are a great source of inspiration, influencing both the culture of the business and its development by the next generation. The Board of Directors is planning the implementation of collective projects at a local level, coordinated by Bobst staff. These long-term initiatives represent a joint commitment and offer employees the opportunity to build the future together.

In 1890, Joseph Otto Bobst (1862-1935), a press operator-typographer by trade, set up a dealership in Lausanne for the graphic arts industry. A clever merchant, a few years later he set up a mechanical repair workshop for his customers’ machines, which added to the prosperity of his business. 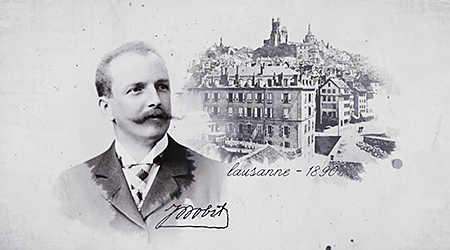 Henri Bobst (1897-1975), his younger son, became the driving force in 1918 as the company went on to specialize in board converting machinery. A talented and visionary engineer, Henri Bobst was just 18 years of age in 1915 when he developed the first platen press for printing Braille embossing.

In the 1920’s however, the company came up against severe economic difficulties. After the end of the first World War, competition from German and French machine makers became overwhelming, as they benefitted from currency devaluation in these two countries. In 1924, to avoid bankruptcy, J. Bobst & Fils SA sold its board division to Marinoni, a French company. In 1936, fate offered the Lausanne-based company its comeback when the one-time buyer, having succumbed in turn to financial difficulties, sold the packaging operations business back. BOBST repatriated its industrial heritage to Switzerland and built a factory in Prilly two years later.

Bobst Propels Board Converting into the Industrial Era

In 1940, Henri Bobst launched the AP 900, the world’s first Autoplaten automatic diecutter. This machine revolutionized paperboard diecutting and creasing, processing over 4,000 sheets/hr. compared with barely 1,200 for a manual press of the day. It marked the start of the Group’s industrial growth.

In 1950, Bobst made its first sales in the United States, which was to become its leading market. Developing its operations on the other side of the Atlantic, it worked in partnership with The Champlain Company, a U.S. company specializing in rotogravure printing presses for high-volume packaging, which it acquired in 1965.

In 1970, BOBST, having run out of space at its Prilly industrial site, acquired 300,000 square meters of land at Mex, in the Lausanne region, on which to build new production facilities.

Building an International Group
It was during the 1980’s that BOBST set itself up as an international group. The acquisition of S.A. Martin in France, Peters GmbH in Germany, and a 50 percent stake in the share capital of Italian machinery manufacturer Schiavi SpA, enabled it to become the world’s leading manufacturer of equipment for the corrugated board industry and to enter the flexible packaging market.

Up to the turn of the 21st century, the Group was still strengthening its position throughout the world. Having opened a facility in Germany in 1990, BOBST went on to establish subsidiaries in Malaysia, Thailand, Taiwan and Indonesia and to set itself up in India. It put plants into operation in Shanghai, China and in Itatiba, Brazil, and also opened dealerships in Central Europe and Russia.

In 2004, BOBST acquired five converting equipment businesses from Metso, the Finnish group, thus strengthening its presence and market share in the flexible packaging industry, a sector accounting for just 7 percent of BOBST sales at that time. With this acquisition, the Group intended to achieve 20 percent of its turnover in this field and thus strengthen its position in this thriving market.

Strategic Consolidation of the Business: a Single Group and Brand

Between 2009 and 2011, the Group, having been hit hard by the 2008 global financial crisis, launched an unprecedented turnaround program combined with a cost and headcount reduction plan. One of the key aspects involved consolidating its portfolio of brands, which continued to expand with the passage of time, under a single name: Bobst. In 2012, the strategic consolidation of the business into one Group and a single Brand was accompanied by the adoption of a new logo to identify all the products and services marketed by the company. The efforts expended, and the sacrifices made, enabled Bobst to resume sustainable profitability as of 2014. The Group is now capable of successfully meeting the challenges of a constantly shifting global economic balance.

In 2013, on completing the TEAM (“Tous Ensemble À Mex” or “all together at Mex”) project, Bobst inaugurated the buildings at its new Mex facility, where the Group consolidated its two production facilities in the Lausanne area into a single one. 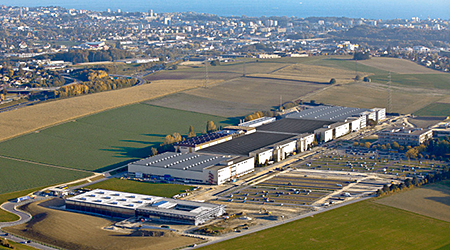 BOBST consolidated its two production facilities in the Lausanne area into a single one.

Since then, the company has excelled with numerous technological innovations. In response to specific needs in growth markets, equipment offering excellent value for money in terms of performance has been launched and is now being manufactured in China, India and South America. In 2015, at the forefront of digital printing, BOBST has been successfully testing two digital presses for a year with its customers. Last spring, it acquired Nuova Gidue, an Italian company specializing in short-run printing machinery. Renamed BOBST Firenze, it strengthens the Group’s position in the label and flexible packaging markets.

The number one global supplier of machinery and services to the packaging industry, Bobst operates in three sectors: corrugated board, folding carton and flexible materials.

Bobst has a presence in over 50 countries, operates 11 production facilities and employs over 4,800 people throughout the world. The geographical proximity between its sales and services networks is one of the keys of its leadership.

The Group devotes the bulk of its resources and energy to strengthening its technological edge. Innovation is written into the company’s DNA, it is at the core of its strategy and has resulted in close to 1,350 patents. Today, Bobst offers equipment, which provides a targeted response to its customers’ individual requirements. Its digital print systems open up new, highly profitable, outlets and give manufacturers as well as brand owners innovative solutions, especially in personalized production and short runs of packaging and labels.

BOBST offers equipment in response to its customers' individual requirements.

Bobst places customer satisfaction at the center of its operations and has been one of the first manufacturers to offer a complete range of services. This includes basic services such as supplying spare parts, remote services and various technical services, as well as maintenance packages, upgrade programs for previously installed machinery and expert assessment packages to optimize production processes. Every year its highly qualified technicians attend over 8,000 days of training.

The Group intends to keep on investing in its personnel and launching new products to meet the needs of the market and consolidate its long-term growth sustainably. The Bobst vision, based on strong human values, has always been the driver of its success and will remain at the core of the next generation’s business project.

Jean-Pascal Bobst, the Group CEO, is the great-grandson of the founder of the business. Since 2009, he has been at the helm of the company, whose headquarters are in Mex, near Lausanne, Switzerland.

Additional information and documents regarding the Group’s 125th anniversary are available at the following web address: www.bobst.com/125years.

About Bobst
BOBST supplies equipment and services to packaging and label manufacturers in the folding carton, corrugated board and flexible materials industries. Founded in 1890 by Joseph Bobst in Lausanne, Switzerland, BOBST has a presence in more than 50 countries, runs 11 production facilities in eight countries and employs over 4,800 people around the world. The firm recorded a consolidated turnover of CHF 1.3 billion for the year ended Dec. 31, 2014.