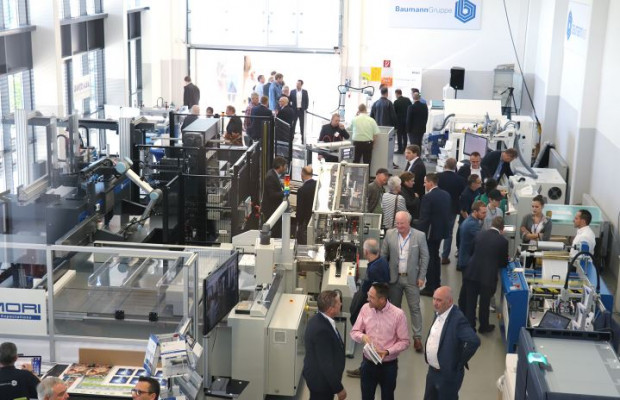 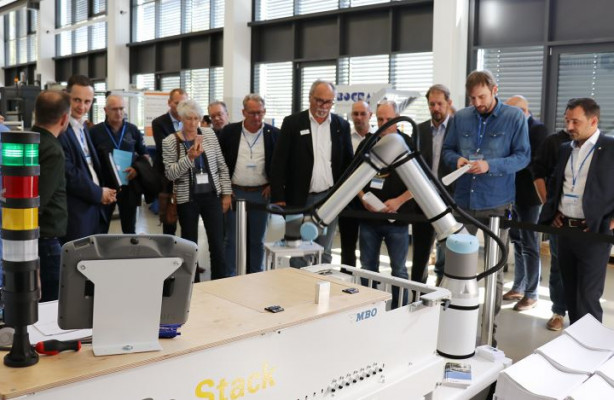 MBO's collaborative robot, the CoBo-Stack, was one of the major attractions. 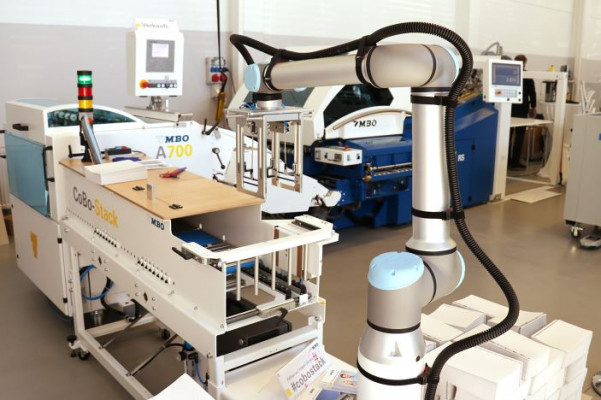 At the Baumann Open House, MBO's collaborative robot, the CoBo-Stack, was on display behind the MBO K8RS combi folding machine. 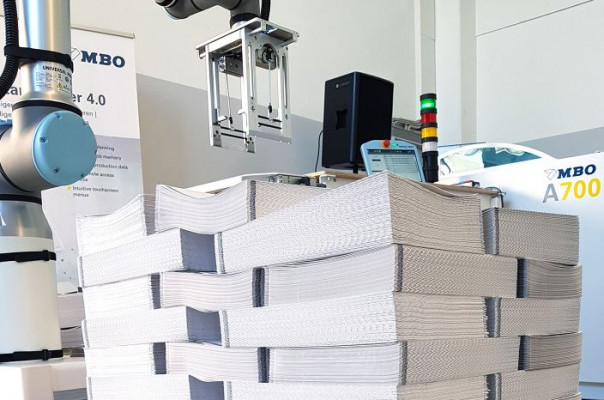 The MBO CoBo-Stack, a collaborative robot, deposits stacks of product on pallets, thus reducing the physical effort for the operator. 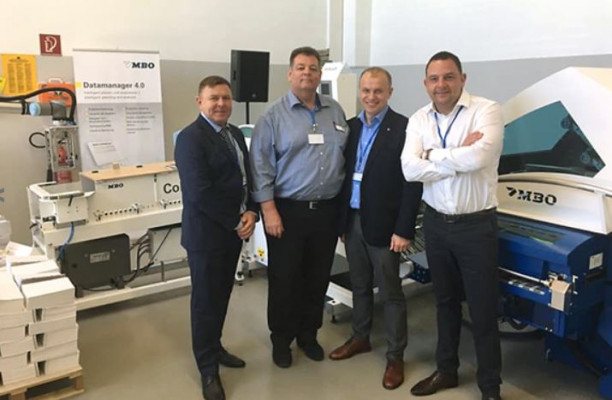 Just a few days before the start of the Baumann Open House in Solms, Germany, folding machine manufacturer MBO announced that visitors to the event could look forward to a real global innovation. This news prompted several potential customers to attend the event at short notice – and they didn’t regret it. At the Baumann Group event, held from May 14-16, 2019, MBO Group presented its new product, the collaborative robot “CoBo-Stack.” The response was overwhelming. Many visitors stated that they had been waiting for years for such a solution. MBO sold 12 CoBo-Stacks straight off, during the Open House itself. And as MBO also received numerous enquiries, it expects to receive several further orders in the follow-up to the fair.

The CoBo-Stack means a huge reduction in the physical workload for the operator of the folding machine. The robot picks up stacks of folded signatures and deposits them on pallets. The pallets can be positioned on both sides of the folding machine delivery, allowing uninterrupted operation. While the MBO CoBo-Stack is filling one pallet, the operator can move the full pallet away and prepare the next empty pallet.

An indicator lamp lights up in different colors, signalling various robot operating statuses to the operator. For some operating statuses, there is an additional acoustic signal. This means that there is no need for the operator to remain directly at the folding machine, giving him or her time to carry out administrative tasks, for example quality control or preparing the next folding job.

At the Baumann Open House, the MBO CoBo-Stack was exhibited behind the K8RS combi folder, the fastest folding machine in its format class. As a special feature, the machine was integrated into the cutting-edge, cloud-based management platform “Keyline” from “Crispy Mountain.” The Keyline MIS maps all classic printshop processes – from offer preparation to printing and print finishing right through to invoicing. The user interface is very clearly structured and intuitive.

The MBO Datamanager 4.0 functions as the “translator” of the data exchanged between the K8RS MBO folding machine and the Keyline MIS. Datamanager first saves the data of the jobs arriving from Keyline and converts them to the machine language. The operator can access the data directly via the touchscreen of the folding machine. For example, he can use the data for automatic set-up of the machine or check that the correct paper pallet is in place in the feeder. This prevents transmission errors.

And the operator no longer needs to compile information on a print job once it has been completed. The number of folded sheets, quantity of waste paper and other data such as set-up times and machine speeds are recorded during ongoing production and reported to the higher-level Keyline MIS with the help of MBO Datamanager 4.0. The real-time data from this networked application ensures that job planners have a clear overview of the status of all jobs at all times and can carry out fine planning based on the specific situation if required.

With its open interface, MBO Datamanager 4.0 can be incorporated into almost any MIS. And it goes without saying that a random number of folding machines can be integrated. These folding machines do not necessarily have to be on the same production site. As the customer’s network is used for data transmission between folding machine and MIS, a decentralised organisation is not a problem for Datamanager.

Oleksandr Popovych, from Ukranian printing company “Unisoft“, purchased an MBO K70 with a Z2 mobile knife folding unit and SBAP46 delivery at the Baumann Open House. The K70 is the entry-level model from MBO for combi folding machines in 3B format. It is suitable for high precision, high performance production of folded products such as signatures and flyers in medium and high print run lengths. Even complicated folding impositions can be produced with absolute precision. The K70 is available as a manual or automatic machine.

The MBO Group thanked Baumann Group warmly for its extremely competent handling of the Open House event. Thomas Heininger, CEO of the MBO Group, said: “This event, under the fitting motto "Experience Together," is the ideal platform for us to present the entire print finishing spectrum with other exhibitors and partners such as Bograma and Hohner. We look forward to further co-operation with Baumann Group and to participating in similar events in future.”