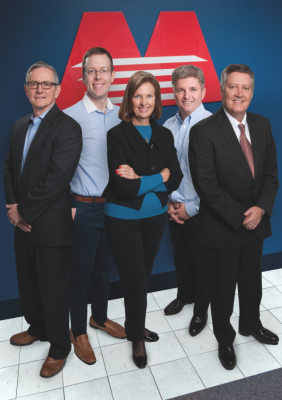 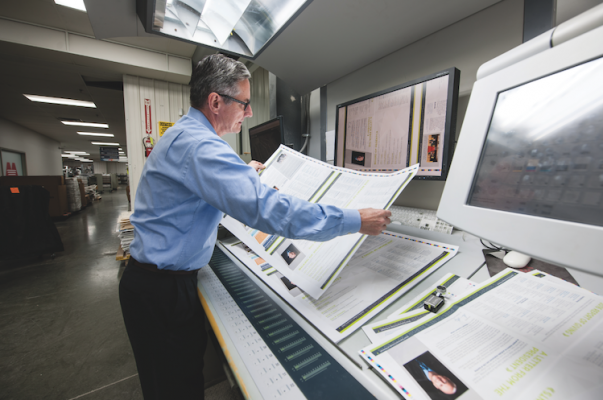 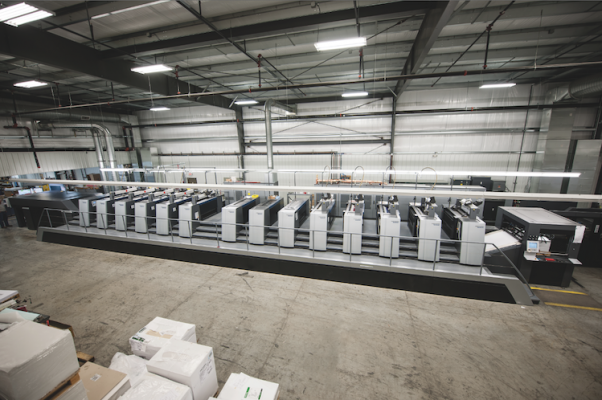 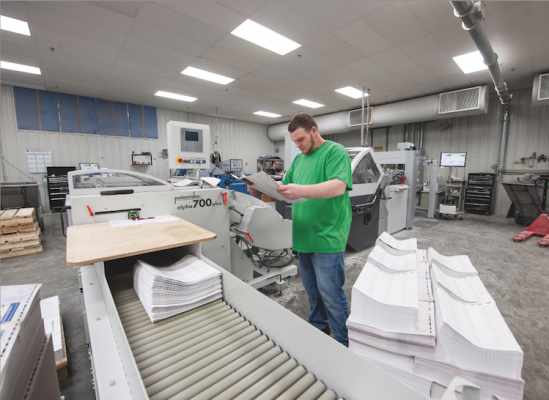 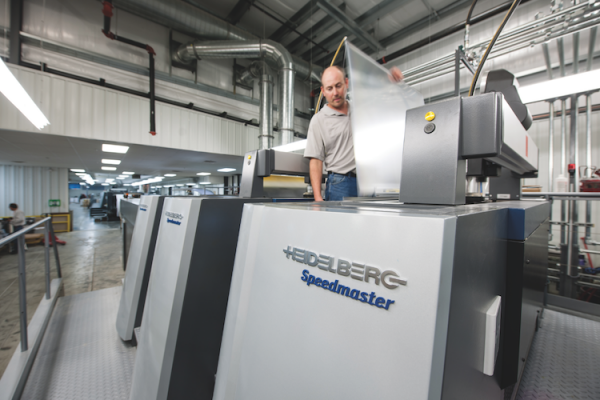 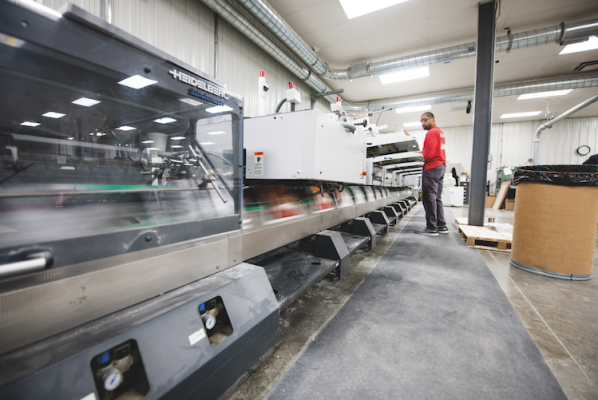 Modern Litho was over capacity in terms of its ability to output more jobs. “And when I say ‘over capacity,’ I mean, we were running 24/7 and still had to turn down work that fit us,” recalls Greg Meeker, co-owner and VP of sales and marketing at the Jefferson City, Mo.-based printer. Through it all, its employees stepped up and answered the call the best they could. “But, unfortunately, you only get 24 hours in any given day,” he quips.

In response, the firm had replaced three 40˝ presses with an eight-color Heidelberg Speedmaster XL 105 sheetfed offset perfecting press with an in-line CutStar roll-to-sheet feeder four years prior and gained some incremental capacity at the time. “But we ran out [of available press time] a year or two earlier than we had planned,” shares Darrell Moore, co-owner and president.

“The market is demanding,” he adds. That’s why the team was so excited about its latest installation last fall: a 10-color Speedmaster XL 106 perfector equipped with double aqueous coating units and a CutStar system. “This press has enabled us to add 60% more output capacity to our plant,” says Moore.

The $6 million press and increased floor space may not have been possible if not for a recent partnership between Modern Litho, the City of Jefferson, Cole County and Jefferson City Public Schools. Modern Litho received an $8 million revenue bond as an incentive to expand its operation, which will also result in the addition of approximately 50 new jobs at the Jefferson City location during the next five years. The company maintains that this bond will be cost-neutral to taxpayers.

In addition, Jefferson City waived 75% of the property tax on the new equipment — equal to about $1.5 million during the first five years. What’s more, the state of Missouri awarded Modern Litho $30,000 to use as part of its training program for the new Speedmaster. And under a state job creation program called Missouri Works, the firm will save another $300,000 in tax credits over six years as the new employees are added.

“With the overall economic climate improving — yet sometimes still stagnant in cities — local municipalities are eager to incentivize companies that are growing, especially when it comes to adding jobs,” explains Jeff Davidson, Modern Litho’s VP of corporate strategy.

The resulting agreement is a shining example of how printers and their communities can work together to foster both local economic and job growth.

Certainly for Modern Litho, giving runs on a two-way street.

Co-owner Darla Porter, Darrell Moore’s sister, who also serves as CEO, points out that the adage, “Leave the dance with the one who brought you,” is apropos to how Modern Litho operates. “Since the community has been so generous with tax and training credits — we want to be a good community steward in return,” she stresses.

So Modern Litho supports the community from the inside out.

As a Pacesetter company with the Central Missouri United Way, Modern Litho has an employee-run charity fund, explains Cassandra Atchison, marketing director. The employee group itself decides where the money is allotted.

At Thanksgiving, each employee is given a turkey, but they are also given the opportunity to donate their turkey to the local food bank. More than 25% of the turkeys are given back so that needy families can celebrate Thanksgiving, Porter shares.

In addition to food drives and fundraisers, Modern Litho actively seeks to hire veterans through a federally funded program, Show-Me Heroes. “We’ve found the veterans we’ve hired in the past to be very high-quality individuals,” notes Moore. “And we want to hire even more of them.”

The type of employees it attracts is one measurement of Modern Litho’s success. “Print manufacturing typically is not viewed as a glamorous profession anymore,” observes Meeker. “But we are attracting young professionals throughout our organization.”

To the best of his knowledge, adds Moore, Modern Litho has never had a layoff — and that speaks volumes — even after merging with Brown Printing and acquiring multiple companies, including three in the past five years alone.

“Our philosophy has not been to tuck in the acquisitions and then layoff all of their employees,” he says. “We tuck them in and bring the staff along with them.”

Greg and Becky Meeker’s company, Brown Printing, was one such strategic partnership. Nearly 17 years ago, Brown and Modern Litho were direct competitors — in a friendly sort of way. As Moore candidly describes his relationship with Meeker: “Monday through Friday, we would fiercly compete; but come Friday nights, we’d get together with our wives and play cards.”

In 1999, Modern Litho was running out of capacity (a recurring problem for the growing company), when Moore approached Meeker about merging their businesses. On Jan. 1, 2000, the start of a new millennium, the deal was sealed.

Moore, Porter and Meeker make up the current ownership group and manage a workforce of about 209 employees.

“We’re all in our mid-50s,” explains Meeker of the ownership trio. “We’re not going anywhere now, but we have started the discussion about successful ownership transition. It’s of paramount importance to our employees, our community and the long-term future of our company.”

Meeker says the firm is “on the edge” of packaging, but not the cutting edge — yet. Currently, Modern Litho outsources the converting and finishing process, but that functionality will all be brought in-house with the upcoming purchase of a 40˝ diecutter and a folder/gluer.

Modern Litho also has an onsite postal employee, making it an official USPS Plant Load Facility. Jobs come out of bindery and are in the mail the same day, Meeker explains.

With many printers dubbing themselves “marketing service providers,” Modern Litho sticks to its core competency: printing. “We like to participate in those conversations and be part of the strategic planning, but we don’t consider ourselves a marketing services provider,” Meeker adds.

However, Modern Litho is keen on staying ahead of the technology curve. For a company its size, notes Jim Tomblinson, VP of operations, Modern Litho beta tests a lot of software. EFI’s iQuote and Kodak’s Prinergy 8 are just two recent examples. “These vendor partnerships help keep us ahead of our competition,” Tomblinson explains.

Whether it’s partnering with vendors, the local community or its customers, strong relationships are a central part of Modern Litho’s culture. “Customers pick up on the fact that we are partnership-minded,” shares Meeker. “It’s just such a key part of who we are that it translates into tight relationships.”

Tomblinson adds, “We want to build a cocoon around the customer. It’s not just about print anymore, it’s about everything combined: good customer service, our creative teams, the products we offer and our high standard of quality.”

And eventually from that cocoon, a beautiful butterfly will emerge, one that will awe and amaze its clients. The key to Modern Litho’s growth during the past 80 years is helping its customers grow.

Modern Litho was founded in 1937 by an Austrian immigrant named Anton Hiesberger. In 1972, he sold the company to a printing equipment salesman who happened to call on the company, Gasper Scuderi. What follows from there could make an episode of A&E’s “Biography” TV show.

Moore and Porter’s mother, Jeanie Moore, worked for a state agency that printed a job with Modern Litho. As Moore tells it, when Scuderi asked her, “Well, how did we do?” she replied, “Oh, we loved the book, but if you don’t fix this, this and this, I don’t think you’re going to stay in business.”

Scuderi was so impressed with Jeanie Moore’s candor that he hired her to become office manager and later as general manager. “She had no previous printing experience or college education, but she naturally possessed a very strong mind for business,” Moore explains of his mother. At one point, John Ashcroft, former attorney general for the state of Missouri, offered Jeanie Moore a job, but she declined, dedicating herself to the printing industry.

Eventually, Jeanie Moore approached Scuderi and asked if he might consider selling the business to her family. The answer was yes, and the rest is history.

Over the years, Moore says, many people have asked Modern Litho how it has been able to thrive in what many consider an ailing industry. “We’re continuously adding to our existing customer base,” he explains. “We’re not constantly trying to replace lost customers who may have left due to poor quality or bad service.”

That philosophy is a perfect recipe for continued growth.