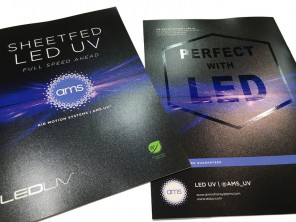 The new process allows printers to achieve astonishing in-line effects and incredible contrast between gloss and matt images simply via the use of a litho plate and a coater. Gloss points of 90 and higher are achievable with a single LED lamp in a 'wet-on-wet' process sequence, with a high-powered AMS XP9 Series UV LED lamp located in the delivery.

"Drip-off is one of the 'holy-grails' of in-line printing effects for many commercial printers to realize," shares Carsten Barlebo, managing director of AMS EMEA. "Traditionally it required a number of conventional, heat-generating mercury-based UV lamps at inter-station and delivery positions to achieve. Not only was this incredibly inefficient, but quite simply it put the process out of reach for most printers. And as the European and other markets are moving quickly away from UV-lamps and seeking alternatives, UV LED now provides a fantastic solution."

Advantages of the new effect are not only stunning visually, but can be rendered with simple litho plates in-line in a standard offset print unit where the matte contrasting effect is desired. The elements of the image that remain glossy are the non-matte-printed areas. "A further advantage of the process is that the coating has no detectable 'UV smell' a big contrast to traditional UV coating technology on the market," comments Steve Metcalf, president and CEO of AMS.

The new process runs counter to the idea that UV LED cannot be used for in-line coating and finishing effects. "We have now established an entirely new generation of UV LED power and coating development with our partners, which translates to another major milestone achieved and 'full speed ahead' for UV LED in the market for top-quality, high-productivity machines," adds Hans Ulland, VP of sales for AMS. "It gives much of the same tactile effect of the latest generation of off-line, ink-jet raised print-enhancement presses, but this is done in-line at virtually no additional cost per sheet."

The new LED Drip-Off process will be on full display at drupa 2016 by AMS (Hall 14, B71), and was highlighted in the Grafische Palette magazine in Germany, where it was used to create the inside cover for the drupa 2016 special edition. AMS will be distributing numerous samples of the effects on a wide range of materials to printers visiting its stand on drupa.

AMS Stand at drupa 2016
AMS will showcase all of its products, as well as numerous examples of UV LED printed quality, substrate variations, special effects and customer successes at its 115 sq. m. (1200 sq. ft.) stand in Hall 14, Booth 71 at drupa between May 31 - June 10 in Duesseldorf, Germany. Additionally, AMS UV LED will be running live and on display at partners ranging from KBA, Flexotechnica, BOBST, Uteco, OMET, INX Digital, Argos and Flint Group among others. AMS will announce further UV LED activities and strategic partnerships at a drupa press conference - June 2 in Dusseldorf at the Deutsche Messe.