Ads From Past Had Star Power

As part of our walk down memory lane in celebration of our publication's 60th anniversary this month, we thought it appropriate to showcase a sampling of advertisements that appeared in Printing Impressions during the past six decades. While, as you might imagine, many ads from the 1960s and 1970s featured attractive, sometimes scantily clad, women to help catch the attention of the printing industry’s male-dominated population, actors and sports stars were also employed to provide celebrity endorsements. Here are just a few that stood out. 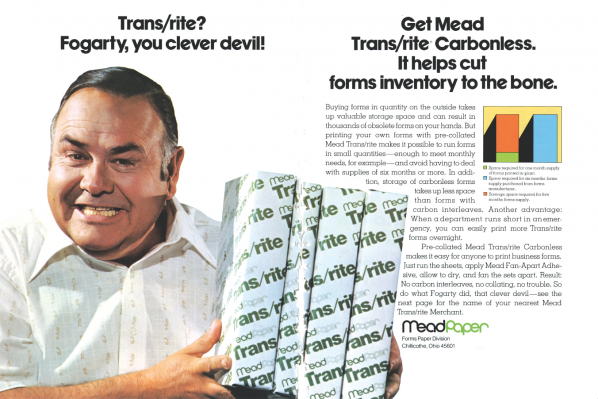 With carbonless paper enabling the ability to produce short-run forms, Mead Paper ran an ad campaign around the fictional character of Fogarty the Printshop Manager. And, yes, that’s comedian Jonathan Winters as Fogarty - who apparently also ran a print shop when he wasn’t on “Hollywood Squares.” 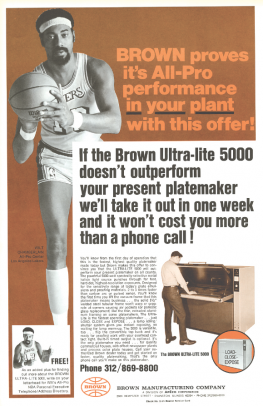 Wilt Chamberlain lent his image for the Brown Ultra-lite 5000 platemaker. The ad also touted “Wilt’s All-Pro NBA Personal Executive Telephone/Address Directory.” Of course, that free offer was made long before Wilt boasted to “making the acquaintance” of 20,000 women in his life. 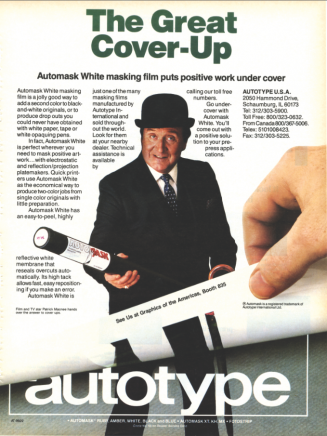 Recognize the actor donning his trademark bowler hat and cane? That’s Patrick Macnee, who played John Steed in the ’60s spy TV series “The Avengers.” Anyone who thinks that show is related to the Marvel Comics Superhero franchise, “The Avengers,” needs a quick history lesson on how masking film was once used in the offset platemaking process. 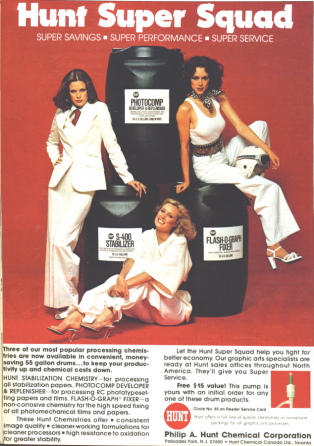 The emulation of pop culture figures has served advertisers well. That’s likely what prompted the creative agency for the Philip A. Hunt Chemical Corp. to create its Hunt Super Squad to tout the virtues of Hunt’s three processing chemistries. It’s no coincidence the three beauties bear a striking resemblance to the crime-fighting trio of Kate Jackson, Jaclyn Smith and Farah Fawcett, who starred in “Charlie’s Angels” during that same period. If a printer made an initial order of any of the three drum products, the Hunt Chemical ad promised, they’d also receive a free pump. (No further comment necessary.)

Related story: 60 Memorable Years of Printing Impressions - Covering the Good and the Bad

A Look at 60 Years in Printing