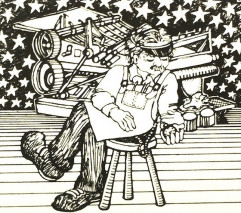 Here’s the next installment in our continuing series of republished “Otto’s Night Watch” columns written by Otto Boutin, which appeared monthly several decades ago in Printing Impressions. Although written tongue-in-cheek about the lack of skill required to operate a Linotype machine, it's filled with other messages about our human value systems, the downsides of a capitalistic society, and even prejudice — albeit that between baboons and chimpanzees. Enjoy. This one is an Otto Boutin classic!

The Human Side of the Job

During the depression it was easy for a Linotype operator to take a few days off. All he had to do was ask a sub to take his place. There were always plenty of subs hanging around, hoping to get a day’s work. In 1930 the slipboard of the Chicago Tribune carries the names of more than 70 unemployed subs. On an average afternoon there were 30 of us waiting in the hallway. Five or six got hired for the day. A sub at the bottom of the list was lucky if he got a day’s work every three weeks.

Conditions have changed. New machines have replaced the old. I was working for a small shop in 1937 when the boss installed a new Intertype with a marvelous attachment, a quadder. Printers from all over sued to come to watch me run it, centering lines automatically. They predicted that a great many men would be thrown out of work. Now school kids come to watch me feed tape to a machine in Iowa. They nod their heads as their teachers solemnly predict that men like me will soon be out of work. Yes, everything has changed — except me. I’m still a bum.

“Hey, boss!” I yelled the other day. “I wanna take off for a few days. To visit New York.”

Well, it looked as if I’d have to quit again, after having accumulated three months of seniority, which is quite a bit for me. I never believed in seniority anyway. It paralyzes the body and mind, isolating a person from new places and new ideas.

Just then I heard two executives bellowing at each other.

“That’s the whole damn trouble!” one of them was yelling.

“We’re paying the men too much money to run these machines. We don’t need craftsmen anymore. The work has become so simple that any baboon can run a typesetting machine.”

The next morning I went to the zoo to visit Babby the Baboon, an old friend of mine. With a harem of lady friends, he lives in a cage bigger than my apartment.

He’s always eager to communicate, not with English words, but with grunts, snorts, smiles and scowls, eloquent gestures, and with blinking of his eyes. He is much more communicative than the average human being. He doesn’t keep his nose stuck in a newspaper. He doesn’t spend his time staring, like a mute zombie, at a television tube.

“Babby,” I told him. “I’m a Linotype operator at the Daily Mixup. I want you to be my substitute. I know you can do the job because the production manager said so.”

Babby jumped up and looked down, eager to do me a favor.

“When do I start?” he squealed.

“Next week. All you have to do is feed tape into a machine. Like this.” I showed him a piece of tape I had brought.

“Can do. Nothing to it. Bring the machine.”

“You’ve got to go over there.”

“I hate the traffic. Air pollution. But I’ll go. So I’ll run the tape through the machine and then what?”

“Then you put another tape in. And another and another. All day you keep running tape through the machine.”

“All day?” Babby’s eyes popped wide open. “I’ll try anything for five minutes. But I won’t do it all day. Life is too precious. I’d miss the sunshine.”

“You can work nights.”

“Sleep is precious. Besides the job sounds too boring for a baboon.”

“The tape comes in pretty colors,” I said coaxingly. “Yellow and pink. Maybe they’ll make it in red, green, and lavender to make the job more stimulating. As soon as the industrial psychologists get into the business.”

“Still sounds dull,” said Babby. Why should a self-respecting baboon spend all his time pushing tape? There are so many other things to do.” He glanced over his shoulder at his companions who were eavesdropping from behind a log.

“You’d be paid,” I continued. “Two hundred bananas a week.”

He blinked. “That’s a lot of bananas. More than I can eat. What would I do with them?”

“The baboons would starve.”

“No, they wouldn’t. You’d magnanimously give them a job. You’d hire them to gather bananas from your trees. For every dozens bunches picked, you’d give them four solitary bananas. Then you’d take two back for taxes and interest. Think of all the bananas you’d have.”

Babby scratched his head. “I’d never be able to keep track of all those bananas.”

“You’d hire a smart baboon to do the counting. For every thousand bananas you counted, you would give him one.”

“He’d be an embezzler. You’d have him locked up.”

Babby strutted about the cage, deep in thought. Then he said, “Funny thing about you human beings. You’re always having things locked up. Every Fourth of July your politicians come to the park to make speeches about freedom. But you really believe in cages. You put everything into cages. Birds. Fishes. Elephants and gophers. Butterflies and crocodiles. Young people and old people. I don’t blame you for putting chimpanzees in cages. They belong there. They’re crazy.”

“Chimpanzees crazy? Why do you say that?”

“They’re always imitating human beings. Riding around on bicycles for Ed Sullivan. You never saw a self-respecting baboon do that. Or choke on a cigar. I know what’s going on, you know. They even bring those televisions to the zoo nowadays!”

“What about the job?” I asked, getting back to the subject. “Are you going to be my substitute?”

“No, I don’t need so many bananas. Besides, I think something’s wrong with your system. To me it looks like a pile of bananas in one corner of the cage and a gang of hungry baboons in the other corner. I’d hate to be the one to keep them apart.”

“With that attitude you’ll never get anywhere,” I said.

He showed his teeth in a huge grin. “How about yourself? ” he asked. “How far did you get?” Casually he peeled a banana that had been purchased with my tax money.

Avoiding the question, I said. “Then I’ll have to ask Chippy the Chimpanzee.”

The baboon nodded. “Chippy’s the perfect specimen for the job. He’s always skidding down the road of evolution, trying to be human. The other day he was playing with a stick of dynamite, like you people play with atom bombs.”

“No bananas,” said Babby. “You don’t have to give him bananas. Just give him a cigar and a pat on the back. Chippy will do anything for prestige. He’ll run up and down the aisles with coils of tape around his neck. He’ll leap from one machine to the other to keep them all going. He’ll even ride on roller skates to cover more territory. Just pat him on the back and give him a cigar.”

I stood silent, closed my eyes and tried to visualize what the baboon was telling me.

“Well, aren’t you going to ask him?” Babby insisted. “His cage is right down the road.”

“No,” I said softly, shaking my head.

“They’d make him a foreman.”