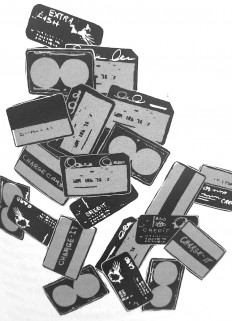 Here’s the next installment in our continuing series of republished “Otto’s Night Watch” columns written by Otto Boutin, which appeared monthly several decades ago in Printing Impressions. Although the fallout from the Great Recession has made it more difficult for printers to secure easy credit for new capital equipment purchases from banks, leasing firms and the equipment manufacturers themselves, the takeaway of how a mismanaged printing business can find itself overextended due to buying/leasing new gear based on monthly payments — combined with a lack of sufficient incoming cash flow to support those payments — still remains true today. And, sadly, a failing printer in distress hurts the entire industry as it underprices work to keep its equipment producing until it eventually reaches the bottom. That, in turn, damages the pricing power for all of its competitors until the shop goes out of business — and its equipment is ultimately repossessed.

They Keep Selling the Brooklyn Bridge!

It was almost 10 o’clock at night when Mr. Boss came back into the shop, carrying a pint of vanilla ice cream. He put some on my dish and the rest on his own. Then he sat beside me at the Linotype, mournfully shaking his head as he studied his mound of white stuff.

“Now it’s come to this,” he said defeatedly. “Doctor’s orders. Ice cream for my ulcer.”

Then his eyes brightened up and he said, “But we just can’t eat it this way, can we?”

“I don’t think so, boss,” I replied. “I never eat it raw. Might have germs. I always put rum over mine. Or maybe crème de cacao, like I do on oatmeal.”

Mr. Boss went to his desk and opened the fabulous drawer. “We’ll try it with blackberry brandy,” he said, making a quick decision, worthy of any great executive.

I knew he had trouble at home again, or he wouldn’t be here in the middle of the night, seeking solace in ice cream.

“These women are crazy,” he said finally. “A dozen of them are in the house, watching some kind of copper kettle demonstration. And I’ve been listening to them talk about how they throw their money around. For instance, one of them just got married two months ago. And do you know the first thing the newlyweds had to buy?”

Mr. Boss’s voice had been rising indignantly, which was bad for his ulcer. I tried to pacify him by handing him a cookie out of my lunch box.

“But they haven’t the money. They’re paying it off at $20 a month for three years. Can’t they buy something cheaper for cash?”

“Those days are gone forever, boss,” I told him. “Nowadays we enjoy as we pay.”

“Does anyone enjoying paying every month?” he demanded. “Twenty percent interest? Or take these new credit cards everybody is pushing down our necks. Any nitwit can run through a store, flashing a card as he buys anything from pretzels to motorboats, and poor daddy gets stuck with the small print that mentions 1½ percent per month interest. That means he’s going to pay $118 for $100 worth of merchandise that nobody really needs. I like to see people pay cash. They think twice before handing over real, honest-to-goodness money.”

“Tell that to the bankers,” Mr. Boss replied. “Tell them to accept a credit card in payment of a mortgage. No matter how they approve of credit cards, when it comes to the final settlement, they never take anything less than cold cash. Deep in their hearts the bankers are no different from my grandmother. She used to run a Bohemian finance company under the mattress. If we needed to buy something we borrowed cash from her.”

“We had to keep her supplied with peppermint schnapps. She always kept a bottle under her pillow, for sipping during the night. Kept her healthy till 97.”

Mr. Boss smiled as he thought of the good old days. “You know,” he continued, “we used to have some pretty good salesmen back in those days. Every few weeks the Brooklyn Bridge was sold to some farmer who gave all his money as a down payment.”

“Are you kidding? What about that small printer on the south side who went broke paying for an $8,000 paper cutter? He needed it like a hole in his head. The same guy who had sold it to him for eight grand bought it back at the auction sale for 11 hundred dollars. I think it was lousy salesmanship in signing up that little printer for such an expensive paper cutter. It was like selling him the Brooklyn Bridge.”

I shook my head. “That’s not the salesman’s problem, boss. The guy should know what he’s buying.”

“In a civilized society it should be the salesman’s problem. He should know what a man needs and what he can pay for it. Take that new printer that opened up down the street. I think the salesmen are keeping him doped up on LSD. For $100 down and $50 a month he bought a small duplicator. He plans to get 5,000 impressions an hour, at $3 per thousand. He is willing to work 10 hours a day, six days a week. That’s $900 a week profit, as he calls it.”

“Well, last week when he got a bill from a typesetter, he flipped. Immediately he made a down payment on a cold-type outfit which will cost him $60 a month for three years. He figures he’ll get all the composition free because his wife will set the type at home in her spare time. She’ll do the paste-ups between the changing of diapers. They’ve got two small kids, you know.”

“That’s not all of it,” continued Mr. Boss. “In renting the store, he signed a two-year lease at $100 a month. So now he’s over the barrel.  A lot of money going out and very little coming in. He’s not a professional printer and the quality of his work is poor. He’s lucky if he gets 200 impressions a day, and he keeps cutting pieces to get any kind of work at all.”

I shrugged. “Serves him right, boss. He should figure things out for himself.”

"Why did everybody gang up on this dreamer, ruining him and his family, by selling him a Brooklyn Bridge?”