The summary of Intellicor Communications that follows recognizes this company as a “fast-track” firm that has weathered the recent storm in its own way, and its insight on business and industry trends can serve as a “north star” for companies looking to navigate themselves toward a safer harbor.

Intellicor is a commercial printing company that, according to Principal Michael Hurly, saw a significant amount of growth through its acquisition of Cenveo’s Lancaster, Pennsylvania, and Hurlock, Maryland, printing and fulfillment plants. He says that the company product mix, which is largely done via web or sheetfed offset, consists of a mix of direct mail, publications and periodicals, books, and general commercial printing. He reports Intellicor has a broad base of customers and maintains a large presence in healthcare.

Hurly says that the last year has been focused on consolidation. After inking its acquisition in the second half of 2020, he says this year “has been about taking care of that. We’ve had to consolidate systems, networks, and print management software all under one IT architecture.” Hurly adds that with the acquisition came a “significant digital fleet,” and that the company is exploring its approach to managing the divide between analog and digital processes.

Hurly says that while the Cenveo acquisition was in place for only part of 2020, he expects a “significant bump” this year. He notes that the company is moving aggressively in the last half of 2021, but that Intellicor — like nearly every other printer today — is facing challenges in both materials and labor. Despite current materials shortages, Hurly says he’s “not seeing current softening of the supply chain, and I don’t see it getting worse.” While he believes the current challenges will moderate, Intellicor did undertake a strategic buy of inventory based on an estimation of what the company would need. He adds that they continue to work with their vendors. 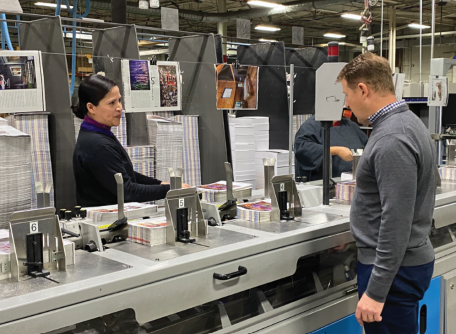 Michael Hurly (right) checks the status of a job within Intellicor's bindery department.

Regarding labor challenges, Hurly says he is seeing the labor market stabilizing, and is witnessing some “boomerang employees:” those who leave expecting greener pastures, but ultimately return. “We still have vacancies,” he says, “but there has been some improvement.”

Looking back on the pandemic, Hurly says his biggest takeaway from that event was the need to act quickly to mitigate impact on cash flow, and the need for effective engagement with employees. “A proactive approach is so important, both with the supply chain and with customers,” he says.

The Role of Growth Through M&A

Looking ahead, Hurly says he hopes things will calm down and moderate. He says current print “spend” seems to be robust, and that Intellicor is “well placed to move forward.” He says the company, in recent years, has been built on acquisitions, and that Intellicor will continue along that path. He sees the lack of skilled labor as a specific concern, noting an aging workforce and smaller pool of workers with specialized skills.

For now, he says, the company is addressing this challenge through aggressive in-house training and by seeking people who have worked in other manufacturing industries.

Broadly, Hurly sees continued consolidation, and hopes for Intellicor “to be a consolidator instead of consolidated.” That, he says, takes commitment and doing work up front. “We’re proud of our team,” he concludes, “and we’re excited about the next few years.”