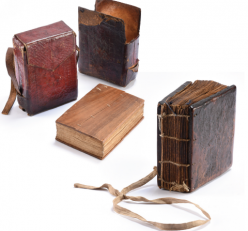 Ancient books and a talisman with a hidden secret sewn inside ... it sounds like a scene from an "Indiana Jones" movie. Researchers at the University of Iowa (UI) have used modern technology to capture scans of an ancient book hidden within a talisman found in Africa.

A recent newsletter released from Archival Products explores an incredible story from Fritz James, the previous owner and now chairman emeritus of Library Binding Services (LBS), a company specializing in the distribution and manufacturing of bookbinding materials. A trip to Africa in 1987 resulted in his acquisition of about a dozen centuries-old Ethiopian prayer books, for which protective cases were made by BookLab in Austin, Texas.

As interesting as the ancient prayer books may have been from an outsider's perspective, Bill Paxson, division manager of Archival Products, told Printing Impressions that James had been collecting ancient and rare books for decades. However, it was one small item that caused intrigue: a 2.25x2.75˝ leather talisman that would have once been worn around someone's neck. Although James knew that there was something hidden inside of the talisman, as tempted as he was, he never opened it for fear that he would ruin its integrity. Instead, it sat for years in one of the protective cases made by BookLab.

Until this past year. 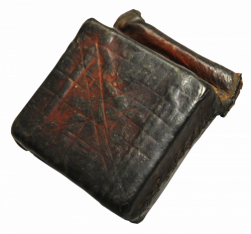 After James spoke with a team at UI Libraries, one of the librarians asked to x-ray the object to determine its contents. The team was pretty convinced it would probably contain a prayer book, since they had previously seen something similar. The talisman, or ketãb, would have been worn as protection, never intended to be opened and read.

In the spring of 2016, the small talisman was brought into the CT scanning room in UI. The team was able to capture high-resolution scans of wooden boards and the indication of a small book made of parchment.

It was determined that the book inside was an Ethiopian-bound book, possibly from the 19th century. The style is similar to Coptic style binding, which was a method employed by early Christians in Egypt 2,000 years ago. The signature stitches would have been exposed, allowing for strength without the potential weakening of the spine over time, according to the iBookBinding. The newsletter explains that the structure is made by "linking stitches to sew pages together as well as cover boards," which is a fascinating example of ancient bookbinding techniques.