Xerox Iridesse: After the Glitter Settles

This blog by Marc Mascara originally appeared on InfoTrends' InfoBlog.

Xerox unveiled its latest production printing press during two jam-packed events in the U.S. and Europe. The first event took place May 9 outside of Rochester, N.Y., at the Xerox Gil Hatch Center for Customer Innovation - the largest digital print showcase in the world.

Customers, prospects and the media were invited to the unveiling of the Iridesse press and given the opportunity to kick the tires. The second reveal took place on May 23 in Warsaw, Poland, during the 2018 Xerox Forum, where Xerox Premier Partners (customers) and Graphic Communication Resellers attended.

Both events could be worthy of an Oscar with the pomp and circumstance of a professional product reveal that introduced the global availability of the press.

My colleague Ralf Schlozer’s first impressions of the Iridesse, launched by Fuji Xerox last December, can be found in the post Fuji Xerox Iridesse – Two specialty colours is better than one. I invite you to re-visit Ralf’s blog for all the launch and specific details of the press while I answer the philosophical question of “do printer’s need a press like the Iridesse now that the glitter and dust have settled?”

So, if you ever worked production you know that manufacturer suggested limits are always ignored, especially if you need to get a job out or when client work is accepted in lieu of going to the competition. You see this in the offset world all the time and that is why successful print companies know that being able to configure equipment for different needs trumps equipment with a “wow” factor. Print customers' first question is always can you do this, and the printer wants to respond with "sure, why not?" Digital equipment sometimes puts the printer into the “what if” situation. Basically, "well, what if" we do this instead?

Quality CMYK for the most part is expected in this class of press, but in terms of flexibility, print providers expect numerous options for not only resolution but multiple halftone screens. Having the ability to respond to real-time production needs based on image quality and media range gives production the flexibility to confidently accept work. Iridesse meets that challenge with Ultra HD Resolution that delivers 1,200x1,200x10 bit RIP resolution and 2,400×2,400 imaging resolution, enabling screening options from stochastic to fine line screens up to 600 dpi. 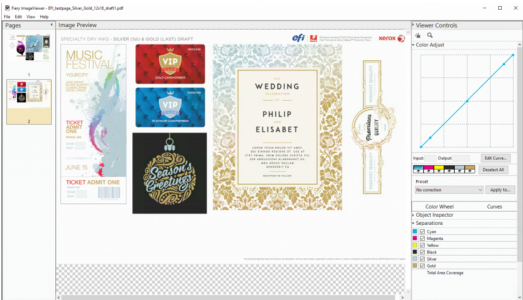 Media plays a huge role in just how many jobs and what type of work a print provider can accept. Just as in offset, digital presses must address a wide array of media while running at rated speeds. I would say most equipment manufacturers are fighting it out on this front regarding the range of media weights and types being supported. Iridesse tops out at 400gsm but gives a respectable range from 52 to 400gsm. Production flexibility comes into play when the print providers press supports a wide array of media types and weights, multiple pick points (i.e., multiple paper trays), that allow for a broad range of supported media and media sizes along with multiple insertion options all running at rated speed. To meet these extreme requirements Xerox equipped Iridesse with technologies integrated throughout the press called “Mixed Media Xceleration” giving the operator a wide array of run time media options with no slowdown of output.

Its this production flexibility that digital press manufacturers continue to expand upon, driving machine innovations which adds to the acceleration of the offset to digital migration and the continued ability to drive manual labor cost out of the production process. With that said, Iridesse is highly configurable, supporting many finishing scenarios from square fold to bookletmaking with Plockmatic’s advanced capabilities, again reducing the overall production touch points with greater production flexibility.

One could say that most digital press manufacturers are competitive in all these areas offering their own set of production capabilities, but Xerox upped the ante by making the print order of colors configurable without the need for a service technician! As in the offset world, you just run a cleanup and change ink, or in this case you swap out the dry toner. As a PSP, you not only have the ability with Iridesse to produce 4-, 5- and 6-color work, but you can self-configure which special color will underlay and overlay the CMYK opening a whole host of design capabilities for high value applications.

Xerox calls this snazzy feature “EZ Swap” which gives operators the ability to swap and run two specialty dry inks in a single pass. The key phrase is single-pass. Just imagine what you could do with a press that supports multiple pass capabilities with very accurate registration. I think offset press operators can see where I’m going with this. Xerox has tapped into one of the last frontiers left for digital press capabilities in opening the ability for the operator to decide the dry ink lay down order with multiple specialty colors and to expand that capability with multiple passes.

Going beyond the “what if” and expanding on the “why not,” it would make sense that with the opening of these new configurable capabilities, Xerox would then expand its special color support way beyond the competitive canary yellow and “hello kitty” pink offered by the competition and start to offer some exciting new color mixes and pigment effects via its EZ Swap docks. Xerox customers can now benefit from a production press that provides a vast array of machine capabilities that encompasses all aspects of “why not”. They can now confidently capture once complex and time-consuming work and provide its customers with advanced and high value applications. Production and press operators will gravitate to the extended machine capabilities knowing they have numerous machine functions and options to get the work out.

I reached out to Xerox to see how things are going with the launch and they noted, “Since our order taking began on May 2, we have been pleased with the very high interest, including brisk buying decisions for Iridesse, both in our North American and International market regions.”