The Critical Role of Light in the Perception of Color

Three necessary components are required to see or measure color: a light source, an object and a receiver. Removing or altering any of these three items will significantly impact how our brains perceive color.

For example, it's fairly obvious that if we look at two different objects such as a banana and an apple, the color we perceive will change from yellow to red. But, different receivers will also impact how we perceive color. The receiver could be the eye of someone with superior color vision, the eye of someone that is color blind, or a spectrophotometer. Because of these variables, it's important for printers and their customers to be on the same page regarding the way light affects the perceived color of a printed sample.

The impact that light will have on the perception of color is both significant and commonly overlooked. A light source works by emitting (or outputting) various visible wavelengths of light that are then absorbed or reflected by an object. The reflected wavelengths result in the perception of color. However, not all light sources are the same. The wavelengths emitted from the light source can vary significantly, thus changing how the color is perceived. The output of a light source is measured in degrees Kelvin and relates to the color temperature or color. The image below illustrates how the Kelvin scale correlates to color temperatures. 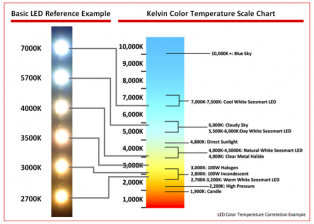 Many consumers don’t realize that when they purchase light bulbs, the color temperature is identified on the side of the package as illustrated in the image below. 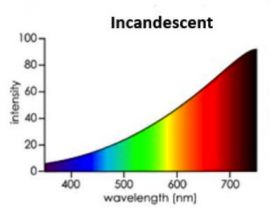 On the flip side, a 6,500 K light is said to be “cool white.” Since it emits more blue wavelengths of light, the objects viewed under it are perceived to be bluer. The picture below illustrates the same image viewed under the three different light conditions. From left to right: Cool white fluorescent (store light), D50000 fluorescent (daylight) and incandescent (home light). As you can see, the same image looks very different under the three light sources.

The corresponding spectral power distribution for the three lights can be seen in the illustration below. You can clearly see the three light sources emit different wavelengths of light, thus resulting in the perception of a different color.

Samples viewed under one lighting condition may meet customer expectations, but the other two would be rejected. This is concerning because although they are all the same printed sample, they are perceived differently due to inconsistent lighting. This can result in miscommunications between the printer and customer, possibly resulting in the rejection of good product. This is why standard viewing conditions are important. ISO 3664:2009 identifies the preferred lighting condition for the package industry as a 5000K (D50) light source, meant to approximate daylight.

As a contextual example, a printer might compare a print product to the customer-supplied color swatch (under 5000K light) and they are a perfect match. The printer then ships the customer eight pallets of finished product. Upon receipt, the customer inspects the print under the fluorescent lighting conditions in their office and the colors are no longer a match, thus prompting a phone call to the printer to see what is going on. I think it’s safe to say this is an issue everyone would like to avoid.

There are times when you may not want to adhere to ISO 3664. For instance, a customer may request the color is evaluated under 4300K fluorescent lighting to mimic the how the customer will see the final product on the store shelves.

Shawn Oetjen is the flexo trainer at Flexographic Tech in Minneapolis, where he oversees the unique cooperative training program founded by AWT Labels & Packaging and Computype. He graduated from Clemson University with a B.S. in Graphic Communications and also holds two associate’s degrees; one in graphics and packaging and another in computer networking, both from Dunwoody College of Technology. Oetjen possess a wealth of knowledge and experience from working in various capacities within the flexographic industry including education, production, technical service and sales. He has a keen knowledge and understanding of the flexographic process from start to finish. Oetjen is actively involved with the Flexographic Technical Association and received the FTA’s president’s award in 2010. Shawn Oetjen is on the Executive Committee for the Flexographic Quality Consortium and is the president of the Twin Cities Flexo Association.