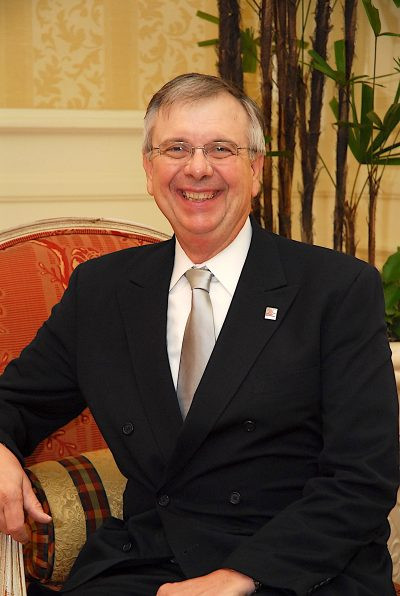 (I was asked to write this obituary, and I do it with a heavy heart. Ray Prince and I had a close 52-year friendship with lives that paralleled each other in many ways, personally and professionally.)
— Harvey Levenson, Professor Emeritus, Cal Poly

Ray Prince was a 61-year industry veteran, consultant, and advisor who dedicated his career to helping printing companies to improve in the areas of productivity and quality with the bottom-line objective of increasing their profitability. Ray passed away on May 1, 2020.

Ray has consulted in numerous operational areas that cover the gamut of disciplines from sheetfed and web press testing and solving paper and ink problems, to color control systems and paper waste reduction. Ray received an A.A.S. and B.S. in printing management from the Rochester Institute of Technology (RIT) and an M.S. in printing management from South Dakota State University.

Ray’s interest and career in graphic communication began at the age of 14 in 1958, when he found a 3x5˝  Kelsey hand-operated printing press in his parents’ attic. He asked his father to teach him how to operate it. The first job he printed was letterheads and envelopes for his church. Then it hit him! In his words, he “created something of use and beauty, and was hooked.”

Shortly after, while still in high school, Ray borrowed $900 from his father and purchased an entire very old letterpress operation from a used equipment dealer in Pittsburgh, Pennsylvania, where he lived. That started Ray’s career in printing. Upon graduating from high school, Ray had earned enough money to attended RIT for his AAS and BS degrees, and then South Dakota State University for his MS, all in printing management.

After receiving his MS degree, Ray was hired by the legendary Mike Bruno at the Graphic Arts Technical Foundation (GATF) in their new headquarters in Pittsburgh. He was motivated, trained and worked six days a week. He had the opportunity to travel extensively, many times at Mike Bruno’s side, doing consulting. He attended every seminar, conference, and workshop given by GATF. When Mike Bruno retired, Ray reported to McKinley Luther, a lawyer with great organizational ability. He taught Ray a lot and guided him in public speaking that served Ray well over the years.

Ray’s next employment was with the Azoplate Corporation, a manufacturer of lithographic printing plates and other products for the printing industry. At Azoplate, Ray learned machine manufacturing with the advent of plate processors and other printing equipment. He was also elected to the Board of Directors of the Technical Association of the Graphic Arts (TAGA), an industry research association composed of leading scientists, technologists, and innovators in the graphic communication industry, and served on several committees.

After about nine years at Azoplate, Ray joined a commercial printer in Sioux Fall, South Dakota, and then was invited to return to GATF where he reported to John Geis, Director of Technical Service, and later to Bert Bassett, GATF President. This started Ray’s many years of consulting, lectures, writing, conducting seminars, and heavy travel. GATF was growing and merged with Printing Industries of America (PIA), and Ray was elevated to Director of Technical Service, with a large group of consultants reporting to him.

After many years at GATF/PIA, Ray was hired as a Vice President by the National Association for Printing Leadership (NAPL), also an industry association, and once again dived into consulting. Ray attempted to retire in 2009, but quickly realized that retirement was not for him and he started his own consulting practice.

Always a friend and supporter of education, Ray helped develop the resources and funded what is now called the Raymond J. Prince Graphic Arts Center (RJPGAC) at Cal Poly in San Luis Obispo, California. He arranged many donations of publications, raised substantial money, and was responsible for the donation of the entire Printing Industries of America Wadsworth Library to Cal Poly; now the largest graphic communication library in the world. The collection includes rare books, some dating back hundreds of years. These books are protected in the university’s Rare Book Collection, but accessible by students, faculty, and members of the industry for research. Hence, the students at Cal Poly are surrounded by knowledge at their fingertips as a result of Ray Prince.

In an essay that Ray Prince wrote, that appeared in the recent Ben Franklin Honor Society BFHS Book of Wisdom, Ray leaves our present and future industry members the following advice:

Ray was a member of numerous industry associations and held board of directors and leadership positions in many of them. He received many honors for his contributions to the advancement of the graphic communication industry and for his support of education.

Ray was preceded in death by his mother, father, and sister, and first wife, Nancy. He is survived by his wife, Bonnie, daughters Susan and Sarah, and grandson, Joseph.

There is no service planned. Condolences can be sent to: Bonnie Prince, 249 Desperado Lane, Custer, SD 57730 or email Bonnie at: 263sophies.mom@gmail.com

Dr. Harvey R. Levenson is Professor Emeritus and former Department Head of Graphic Communication at Cal Poly State University in San Luis Obispo, Calif. His research and teaching specialties are communication, intellectual property, media, printing, and technology. He is often called upon as an Expert Witness in these areas. Contact him at hlevenso@calpoly.edu

Suppliers of the Year Named