An intuition based on anecdote may be a reasonable guess, but a premise backed by data is a verifiable trend. On August 2, a webinar hosted by Printing Impressions Editor-in-Chief Mark Michelson, and sponsored by the Specialty Graphic Imaging Association (SGIA), detailed how convergence in the printing industry has emerged as a trend for every print-based business to reckon with. The webinar is still available to be viewed on-demand, and can be accessed by clicking here.

“Convergence” happens when print service providers expand from their core businesses into adjacent market segments as a way to grow and diversify. For some time, said speaker Nathan Safran, NAPCO Media’s Director of Research, the “overarching hypothesis” has been that convergence is real and that increasing numbers of print service providers are embracing it. Needed was evidence to validate the existence of the trend and to pinpoint where in the industry it is occurring. 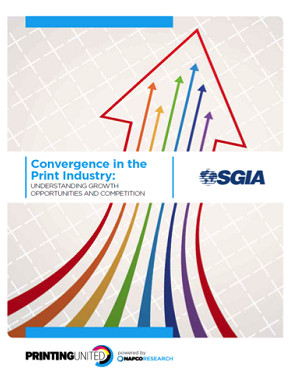 That evidence is plentiful in “Convergence in the Print Industry: Understanding Growth Opportunities and Competition,” a newly released research report from NAPCO Research and SGIA. Based on extensive online surveys and telephone interviews, the report analyzes developments that inspired the two organizations to launch PRINTING United (Dallas, Oct. 23-25, 2019), a new trade show themed to the growth opportunities that convergence brings with it.

Printers are ready and eager to seize them, according to Safran. Nearly everyone surveyed (95%) believes convergence offers opportunities for expansion, and virtually the same number (93%) think that print service providers are in fact expanding into other market and product segments. Four out of five (81%) believe the trend will accelerate over the next five years.

As to where convergence is taking place, the answer is that it’s almost ubiquitous. Safran said that cross-segment expansion is occurring to various extents among the commercial, graphics and signage, packaging, garment, and in-plant segments, with movement toward new applications visible in each.

Another kind of “convergence” measured by the research is the pace of mergers and acquisitions within the printing industry, whereby companies combine with other companies to grow their customer bases, add new capabilities, or accomplish both. More than one-third (38%) of those surveyed plan to execute M&As in their own segments or other segments during the next five years, Safran said.

The key takeaway from the findings, he concluded, is that print service providers take convergence seriously and want to reap its benefits for themselves. This doesn’t mean, he added, that the industry is looking at “a completely one-stop” future because of cross-segment expansion. But, printers should be willing to ask how much broader their service offerings could be and how much “stickier” they could be to their customers as a result. 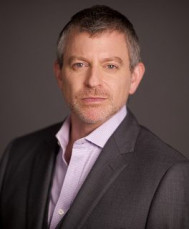 A case study in convergence is the story of JKG Group, told by webinar speaker Adam Gittlin, the company’s president. Started in 1984 as a quick printing and mailing shop in Boca Raton, Fla., JKG Group today provides product packaging, fulfillment, printing, and direct mail services from a 90,000-sq.-ft. plant in nearby Deerfield Beach.

Gittlin said the company’s transformation began in 2015 when ownership of the family business passed to him. Shrinking margins in offset made it clear that the time had come to branch into applications with more potential, particularly packaging for various consumer and cosmetics goods. Kitting and fulfillment were “obvious next steps” after entry into this market, Gittlin said.

He emphasized that expansion into new areas requires careful, ROI-focused investment in both equipment and personnel. Each opportunity comes with its own set of challenges, such as providing climate controlled, secure warehousing for fulfillment operations and dealing with volume spikes in kitting.

Gittlin said success in this kind of growth comes from learning continuously, staying attuned to the industry, listening to clients, and being ready to change as soon as the opportunity to change presents itself. Something else to be prepared for, he added, is failure, but as an ultimately positive experience to learn and move forward from.

Convergence, he pointed out, isn’t a new phenomenon: it’s what prompted printers in the 1980s and the 1990s to “migrate” into prepress, typesetting, desktop publishing and other production services they had traditionally obtained from trade shops.

Migration into adjacent segments remains a reality, but Parsons said the question today is whether printers are doing it for the right reasons. Expanding proactively to gain a real competitive advantage is better than expanding reactively simply because customers are demanding it. If what customers expect from one-stop-shopping is just a lower price, Parsons explained, migration may bring more risk than opportunity to the print service provider.

Adding new services make sense when they create genuine sales potential and make the printing business more competitive with others of its type, he continued. They need to be supported with training, strategic capital investments and a “unified” sales force capable of selling everything the business has to offer.

The same yardsticks of business viability apply to non-print specialties that some print shops are considering: design and marketing services; data management; warehousing and fulfillment; and the hybridization of print and online media through augmented reality (AR). They’re worth pursuing, Parsons said, if printers can earn money with them and if they can acquire the kinds of non-traditional expertise needed to make them work.