Paper or Digital Bills and Statements: What Do U.S. Consumers Prefer?

Companies and organizations continue to promote the switch from print to digital forms of communication but is this cost-cutting in the best interests of the customer? 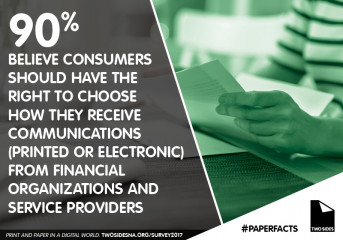 Based on a June 2017 U.S. survey¹, 90% of respondents felt they should have the right to choose how they receive communications (printed or electronic) from financial organizations and service providers, and 83% thought consumers should not be charged more for choosing a paper bill or statement. However, corporations are increasingly charging their customers for paper statements. For example, the Public Interest Advocacy Centre reported that Canadians are paying between $495 million and $734 million per year to receive paper bills or statements from communications and banking companies. A considerable cost considering these communications were received for free prior to 2010. The figures in the U.S. are likely significantly higher.

The ongoing push by businesses to digital-only communications may result in increasingly unhappy customers. According to the survey, 57% of respondents would consider switching to an alternative financial organization or service provider if they forced their customers to go paperless. Almost 70% of surveyed consumers felt that it was easier to track their expenses and manage their finances when printed on paper, and 65% preferred to receive their bills and financial statements through a combination of both online and paper. The preference for print reflects a simple fact: a written reminder of a payment due date or a printed statement makes it easier to stay on top of personal finances. 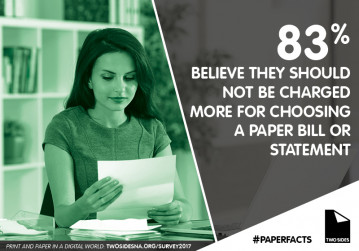 Another problem with encouraging customers to do all of their business online is that many people still don’t have access to broadband internet. In the U.S. in 2015, 15% of suburban and urban residents and 22% of rural residents were not internet users. Rural communities tend to have a higher proportion of residents who are older, lower-income and have lower levels of educational attainment - additional factors associated with lower levels of internet adoption.² In rural areas in Canada, about 15% of the population have no internet access. This unfairly treats a significant segment of the population - and one that can least afford it.

Companies frequently claim that the switch to digital and going paperless is better for the environment. However, 71% of respondents agree that the switch to digital is because the sender wants to save money and besides, many digital documents are printed anyway! Almost three quarters of those surveyed felt that government, banks and other organizations want to persuade them to "go paperless," but it’s not "paperless" because they regularly print out documents at home.

Contrary to popular belief, the issue of choice isn’t just confined to older age groups. As might be expected, 92% of U.S. consumers aged 55+ agree that they should have the right to choose paper or digital, however, a surprising 88% of 18 to 24 year olds feel the same way.

The results of the Toluna and Two Sides survey¹ present some opportunities for companies to adjust their communication strategies so that their customers, young and old, actually get what they want.

For more facts on the issue on consumer choice related to paper or digital options, see this Fact Sheet.

[1] Toluna and Two Sides North America, 2017. Print and Paper in a Digital World - An International Survey of Consumer Preferences, Attitudes and Trust.