Keypoint Intelligence – InfoTrends recently published its annual global production copying and printing market forecast for 2017 through 2022. The global figures for the installed base enable calculations of copy/print volume, service/supply revenues and the retail value of print. This forecast aggregates the data for the United States, Western Europe, Japan and more than 20 other countries or regions to provide a global perspective on how the industry is evolving.

Much of the production printing market is dominated by the most developed areas, including the United States, Western Europe and Japan. Together, these three countries/regions accounted for nearly two-thirds of total production printing placements in 2017. Although the U.S., Western Europe and Japan represent the lion’s share of placements, they only make up about 24% of the global GDP and about 10% of the worldwide population.

As shown in the Figure below, this picture begins to move across the forecast period. Global placements in the “big three” regions will fall to 61%, and there will be a marked shift to some of the emerging economies. These emerging areas represent an opportunity for press manufacturers that are mainly serving more developed countries, where the installed base has already begun to consolidate. 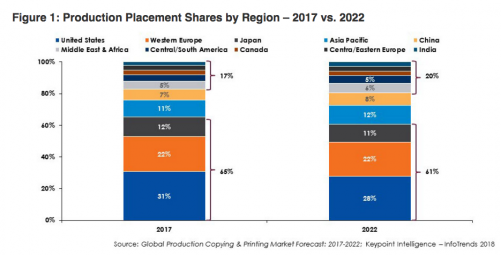 The more developed countries are also seeing a movement toward heavier duty devices. Although this shift will certainly help fuel print volume growth, overall placements in these areas will shrink as businesses will require fewer devices to handle the same amount of work. Meanwhile, the emerging countries will get a chance to catch up and will even see their total placements grow. At the same time, however, up-and-coming regions face their own set of challenges—they are generally prone to wild economic swings, and print demand will ebb and flow in direct response to these changes.

Like placements, production print volumes will experience a similar pattern. In 2017, the U.S., Western Europe, and Japan accounted for 80% of global digital production print volume. By 2022, this share is expected to decline to 77%. Meanwhile, the share for emerging areas will increase during the same timeframe. 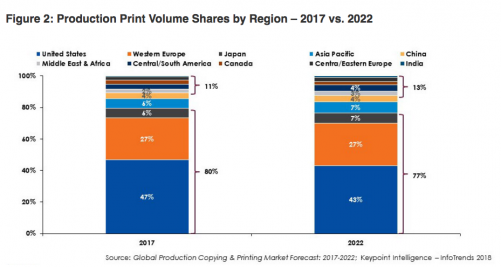 Although InfoTrends’ forecast data clearly shows a shift toward emerging countries, it is important to note that this transition will be gradual. The emerging economies will also need to build up their installed bases before they can represent a larger component of the global print volumes.

As the newest generation of high-speed continuous feed inkjet systems and B2 digital presses enter the scene, companies on a global basis will also be converting more of their offset volume to digital. This will be a major driver for print volumes in developed economies for years to come.

Between a gradual shift away from the dominant countries in terms of placements and print volume as well as a shift from offset to digital, the production printing industry is poised for additional changes. Even in this established and maturing market, there are plenty of areas of growth for businesses that can uncover the opportunities. Although the growth potential is higher in the developing countries, more established economies can also capitalize on the opportunity with the right strategies and a focus on value-added services.

As director of the On Demand Printing and Publishing Consulting Service Europe, Ralf Schlözer is responsible for all service related publications and research in Europe. He is responsible for market trend analysis and forecasting, event or client driven research projects and creating presentations, newsletters and analysis reports. Schlözer has over 20 years of experience in the graphic arts and graphic system manufacturing industries. Before joining InfoTrends, he spent five years in the Research and Development and Digital Printing Business groups of Manroland in product planning and system integration for direct imaging presses and xerographic OEM printing systems. Schlözer has extensive knowledge of traditional and direct imaging presses, as well as non-impact printing technologies. He is the author of several conference papers, trade press articles, and presentations. Schlözer graduated as Diplom Ingenieur in Printing Management and Technology in Berlin, and also holds an M.S. Degree in Graphic Arts Systems from the Rochester Institute of Technology (R.I.T.). Contact him at +49 30 4403 4883.