Commentary: Rejoicing About 'The Daily Miracle' That Every Printer Takes Part in 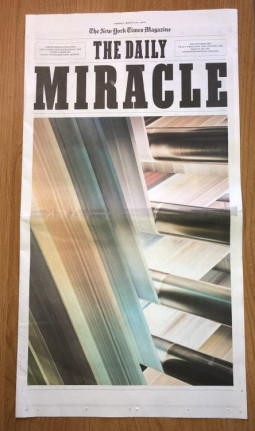 On March 24, the Sunday edition of The New York Times contained something remarkable: a 16-page special section devoted to a photo essay on the production of the newspaper at the Times’ main printing plant in College Point, Queens, N.Y. The section, titled “The Daily Miracle,” consisted of images captured by the photographer Christopher Payne, who visited the plant more than 40 times over two years to complete the assignment.

You can view the “The Daily Miracle” online here, but if you’re fortunate enough to have seen and saved the broadsheet version, you have a truly extraordinary document in your possession.

Payne’s photos of the interior of the plant – surely one of the most intensively mechanized environments on earth – are breathtaking. Having visited the College Point plant on several occasions myself, I’m struck by just how accurately his pictures capture the spectacle and the drama of what takes place there every day.

The print edition renders Payne’s shots at full size in color that’s both rich and raw – see, for example, the stack of ink rollers on page 6, or the plow folder spread on 10 and 11. These offset-printed images of offset reproduction depict the gritty beauty of the College Point operation with a truthfulness that non-print visual media can only approximate.

I have nothing to add to the writer Luc Sante’s beautifully composed, almost elegiac, introduction, in which he reflects on the magic spell that newspapers continue to cast even as the present century passes them by. The reverential reader comments, including some from veterans of the printing trades, also speak for themselves.

What the section does prompt me to say is that the printing industry as a whole ought to be doing more of what the Times has accomplished in “The Daily Miracle.” Both in print and online, the tribute unashamedly celebrates the technology of print manufacturing as something that can and should fascinate everyone, not just the people whose livelihoods depend on it.

Unfortunately, we’ve become a bit too used to the fact that print manufacturing is a miracle. We’ve lost some of our sense of wonder at the wonders that happen every time a press commences a run.

We’re past being impressed by the knowledge, for example, that overprinting four simple colors reproduces thousands more. To us, it’s in no way surprising that sending inks, water, paper, coatings, and other ingredients hurtling through a press at 18,000 sheets per hour yields not an utter mess, but beautiful printing. Digital variable printing, with each sheet coming out of the press looking different? Been there, seen it, done it.

But, if you explain any of these processes to a person with absolutely no understanding of printing – a fair description of just about everybody outside the industry these days – you will have the pleasure of seeing the light of comprehension come on.

Over the years, I have seen it light up faces in classrooms, at conferences and trade shows, and in casual conversations. There’s always a special thrill of discovery in acquiring information for the first time, with no previous inkling of its existence. Because printing is so little understood by those who don’t do it (or write about it) for a living, nothing else kindles that kind of thrill more effectively. This is why we should be exposing people to the miracles of our medium at every opportunity we get.

The industry hasn’t always been good at promoting its interests to the outside world, but this is changing. Through their associations and trade media, printers now express well-articulated positions on postal issues, environmental regulation, commerce, and taxation. We can speak just as persuasively about the marvels of print manufacturing. People will listen. And, they’ll be enthralled.

The physical newspaper, writes Sante, “bows to no product in the modernity and total awesomeness of its production.” At College Point, the miracle of production unfolds as awe-inspiringly as it’s possible to imagine. But, to smaller degrees, the very same thing happens in every other printing plant in the country, every day. That’s news to share without hesitation – and to flaunt with the same kind of pride The New York Times rightly takes in its marvelous manufacturing center in Queens.

Xeikon to Host Next Xeikon Café in Orlando, Fla.

The Future of Print?

A Workout to Empower Your Mind With Kate Eckman