Technology Trends from the InfoBlog
January 30, 2017

Is Avanti the Start of More Ricoh Acquisitions?

Ricoh announced on January 18th that they had taken their strategic investment into Avanti Computer Systems to the next step by acquiring the company. The acquisition is not a surprise for those that have been watching the workflow story develop at Ricoh. The company acquired MarcomCentral (formerly known as PTI Marketing Technologies Inc.) in 2014 and expanded its software partnerships in recent years.

Avanti is best known as the provider of the Avanti Slingshot print management information system (MIS) targeted to exactly the types of print shops where Ricoh finds success for their Pro C product lines. With Slingshot, Ricoh now has a JDF-certified Print MIS that can be on premise or cloud-based. Its modular, open platform lays the groundwork for integration with other Ricoh software solutions. The platform also provides the ability to distribute business intelligence, plan production and integrate into fulfillment and logistics. For Avanti, they now have the resources of Ricoh to support expansion into Europe and then worldwide.

From the workflow perspective, this acquisition gives Ricoh a tested, mature print MIS. Coupled with the MarcomCentral acquisition and their growing professional services offerings, Ricoh is better positioned to grow their commercial customer base and become more deeply entrenched with the mix of customers they support today. This graphic from the Avanti web page illustrates the modular nature of Avanti’s solution and, as important, the partners that connect into it. 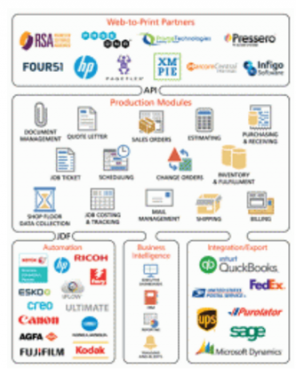 Both companies have stated that the acquisition does not change any existing partnerships, but does this acquisition open the door to some other partnerships for Ricoh? Avanti has a slate of automation partners, including Ricoh competitors Xerox, HP, Esko, EFI, CREO, Aleyant, Konica Minolta, Agfa, Fujifilm and Kodak. Aleyant gives them a path to large format automation with a refined set of prepress tools. Esko opens doors into packaging.

The big question is if this is the slow continuation of an acquisition spree for Ricoh. Avanti makes Ricoh one of the few digital printer vendors who can claim a viable commercial print MIS product in their software tool kit. That gives them a strong foundation to move deeper into the general commercial print market with both their color toner and color inkjet products.

While it will take some time for Ricoh to fully integrate the power of the Avanti solutions into their workflow talk track, it is hard to believe that this is the last stop on the acquisition path Ricoh has been following.