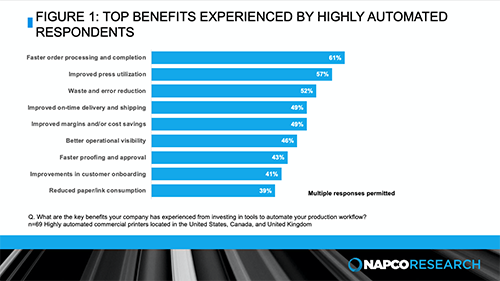 Here is a summary of key survey findings:

Download the full report for more details on key findings.

The study focused on uncovering the primary benefits that workflow automation offers print providers. An essential step for defining survey results was to segment and classify responses by the level of automation of their organizations. The survey asked respondents to rank their organization’s degree of automation (fully automated, mostly automated, some automation, mostly manual or all manual) across various job stages from order submission through job shipping. 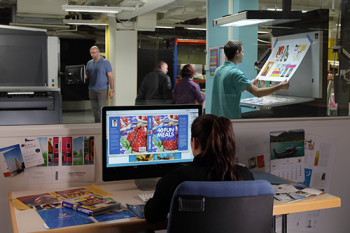 Most respondents report some level of automation across the various stages of production, but relatively few said they had achieved full automation from end to end. Based on their ranking for each job stage, all 254 respondents were scored and classified in one of three categories: high automation, medium automation, and low automation. Each job stage was weighted equally in scoring automation levels.

These respondent segments are the foundation for evaluating the benefits and advantages printing operations are experiencing through workflow automation.

Respondents were given a number of options for reporting the analog versus digital composition of their printing equipment and were asked to select the choice that best described their operation. 50% of respondents report having an entirely or mostly digital operation, while 21% are mostly or entirely analog and 29% do not have a dominating process.

An interesting survey finding of respondents that operate only digital presses is that they required fewer people to onboard jobs and that in many cases, onboarding is totally automated. While respondents with high levels of automation reported higher levels of completely automated job onboarding than those with less automation, printing only on digital presses was more strongly correlated with automating this task and reducing the number of people needed to perform it.

Defining the Value of Automation

Workflow automation is based on the idea that every step in a printing a job can be digitally linked to other steps, creating a chain of programmed events that keep the job moving continuously ahead toward completion. Ideally, this chain of events extends all the way from order intake to delivery of the finished product, generating streams of data that track the job, monitor its costs, and yield insights into making the production of subsequent jobs even more efficient. More advanced automation uses business rules, predictive algorithms, and software to automate tasks and decisions, helping to minimize human intervention and cut implementation time.

This kind of end-to-end, fully automated print workflow is more than just theoretically possible. A few printers have achieved it. Most printers, however, are at the early to intermediate stages of workflow implementation. While some are still just starting to consider their options for making it happen, having an automated workflow is widely acknowledged in the industry as essential to competitiveness and to future-proofing one’s business. 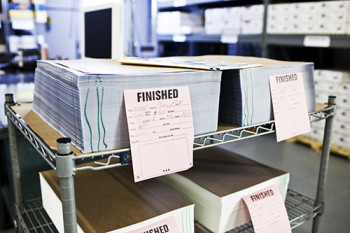 This research report, the first of two on the subject of future-proofing operations with workflow automation, looks at the operational and business benefits automation is delivering to print providers. The next report will cover how printers are using workflow automation to integrate and optimize their processes, including breaking the bottlenecks that hamper production.

This report was commissioned by HP Site Flow. Learn more at www.hpsiteflow.com

Lisa Cross is the principal analyst of NAPCO Research (a unit of NAPCO Media) where she conducts market research and analysis on emerging trends and changing dynamics in the commercial, in-plant and packaging industries, and the market forces that are driving those changes. With decades of experience covering the graphic arts and marketing industries, Cross has authored thousands of articles on a variety of topics, including technology trends,  business strategy, sales, marketing and legislation.