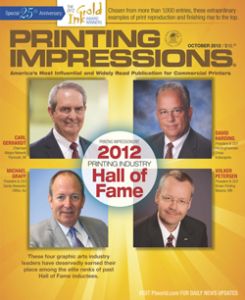 In 1985, Carl and Judy Gerhardt headed to Colorado Springs, CO, as the proud new owners of an American Speedy franchise. That move led Gerhardt to play a prominent role in propelling the Allegra Network into a Top 25 printer, reaching a peak of $371 million in network sales for 2008.

David Harding, president and CEO of HardingPoorman Group, a $34 million printer, cut his teeth in the industry as the owner of The Printing Co., a quick printing operation. Harding has never been afraid to take up Plan B.

Finlay Print-ing, a $20 million commercial and specialty print provider, is closing its doors after more than 135 years in business, the Hartford Courant reported. Its 55 employees were informed of the move in early September and, by the middle of the month, the final jobs were being finished.

Ball State University (BSU) has encountered a road block in its quest to construct a $25 million complex with a hotel, conference center, restaurants and housing for hospitality and food management students: Hiatt Printing, which refuses to budge. Now, the school wants eminent domain power to seize the printer's property, which promises to open the door to a legal battle.

A federal judge has awarded Velocity Press nearly $1 million, saying that KeyBank Utah defrauded the commercial printer by changing the terms of a loan without its knowledge. KeyBank officials rewrote the financial arrangement Velocity had made with Sanden Machine for the purchase of a $1.8 million customized press in 2006.

Mike Graff, president and CEO of Clifton, NJ-based Sandy Alexander, has seen his share of crisis situations during his 33 years in the printing industry, not to mention 27 years as a volunteer fireman. Despite some harrowing moments, Graff has managed to keep his cool and survive both disciplines.

In the end, marrying the direct, national membership structure of the NAPL with the localized affiliate structure of the PIA proved insurmountable. Others might point to partisanship and job self-preservation as key contributing factors in why the unification talks failed.

Salem Printing, one of the largest commercial, packaging and flexographic printers in the Southeast, has acquired Advanced Direct Inc. (ADI), a full-service direct marketing company based in Greensboro, NC. The two companies have worked together as business partners for years, with Salem looking to ADI as a vendor for direct mail, tracking and data mining services.

Printing Impressions is proud to present Gold, Silver and Bronze winners of the 2012 Gold Ink Awards, co-sponsored by Catalyst Paper, Eagle Systems, Fujifilm, Kodak and Konica Minolta. More than 1,000 entries were received, encompassing 48 categories. The award-winning companies and their work will be honored Oct. 8 at the Gold Ink Awards & Hall of Fame Gala held during GRAPH EXPO 2912.

Unleashing the Power of 'Why' –Farquharson/Tedesco

Apple creates market differentiation, influences public perception and helps ensure that every Apple product, every Apple store and every Apple marketing campaign all work toward one memorable, admirable goal: thinking differently. Why don't printing companies talk about themselves that way?

Volker Petersen is all too familiar with operating under difficult circumstances; challenges confronted the firm almost from the day he interviewed with Brown Printing. Having shuttled between Germany and the United States, Petersen finds that he has more of a global view of the industry.