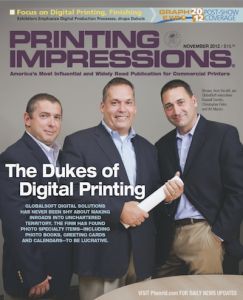 A Vote for Diversified Attack

Not all print shop proprietors have weighed in on the industry’s most pressing question, whether to go “all in” or hedge their bets on digital printing technology. If you plan on catering to both disciplines, having finishing capabilities that speak to the needs of conventional and digital printing is critical.

Fujifilm invited roughly 30 printers, ranging from screen to commercial printing operations, to its facility here for an Inkjet Technology Summit, Sept. 17-18. This two-day show-and-tell was actually held at the Crown Westin Hotel in Kansas City, MO, and at Fujifilm's offices just over the state line in Kansas City, KS.

Management of GlobalSoft contends that the firm has been a digital printing operation since Day One. The company has wagered all of its chips on digital printing and integrated marketing and is now experiencing explosive growth in the photo specialty and calendar markets.

Investigators are still trying to determine the cause of an Oct. 9 explosion that sent seven Sun Chemical workers to area hospitals, including three who were treated at a regional burn center, The Bergen Record reported.

Hallmark Cards is planning to shut down its manufacturing plant in Topeka, KS, by the end of 2013, resulting in 300 lost jobs as it consolidates its Kansas operations at remaining facilities in Lawrence and Leavenworth.

For anyone who grew up during the 1970s, it was impossible to avoid the rock music group KISS. Love them or hate them, they were everywhere—on t-shirts, lunch boxes, pinball machines, hats, posters, action figures, key chains—you name it.

Lessons from a Fat Hypnotist –Farquharson/Tedesco

The decision to make an investment, be it time or money, in any business or activity requires a certain level of faith in the product. In the print world, the "product" consists of everything, from the quality of the mail piece to the condition of the shop itself.

Quad/Graphics Inc. and Baltimore-based Vertis Holdings have announced an agreement through which Quad/Graphics will acquire substantially all of the assets comprising Vertis' businesses for $258.5 million, which includes the payment of approximately $88.5 million for current assets that are in excess of normalized working capital requirements.