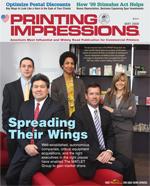 Saddled with more than $6 billion in debt and facing drastically shrinking demand for its newsprint, paper producer AbitibiBowater has filed for Chapter 11 bankruptcy protection both in the United States and in Canada. The company was forced to terminate a $1.8 billion debt exchange offer for its Bowater subsidiary in April when lenders would not provide sufficient support. It had also been trying to restructure $2.4 billion in debt from its Abitibi-Consolidated unit.

Phil Burke, 49, Goss International’s vice president of sales for Latin America, was found dead in Biscayne Bay here April 7. His body and that of his eight-year-old daughter, Tara Ann, were pulled from the water a day after they had gone on a father/daughter boating trip.

IN THE wake of postal reform, the U.S. Postal Service (USPS) started a new practice last year: annual rate increases. Last May, this May, and potentially every May in the foreseeable future, prices will change for most forms of mail and USPS services—usually upward.

THERE MAY be a new man in the White House, but the country is enjoying another stimulus shot to counter what is now acknowledged as a full-blown recession—and, like the flu vaccine, not everyone agrees on how much good, if any, it will do for the average American. From a business perspective, however, it’s a no-brainer.

The Southern California printing scene is taking a big hit with the loss of two well-known names in the industry. Anderson Lithograph of Los Angeles, one of the most prominent printers in Southern California, has been consolidated into ColorGraphics by its parent company, Cenveo Inc. In a letter to customers, Anderson Litho President Mark Tennant said the move is in response to the economic downturn.

I WAS recently at the On Demand show in Philadelphia. For any of you who attended, I am sure you would agree that it was small, but vibrant. There is a growing emphasis by suppliers to the industry on the delivery of integrated—rather than point—solutions, which was very evident at this show.

Cross-Media Services — Getting Results that Count

CROSS-MEDIA is one of those adjectives to which so many printers can lay claim—like green or high-quality printing, value-added services and quick turnaround—they can lose meaning as a point of differentiation. The lack of an established definition means every company can decide for itself what capabilities and service offerings are required to be a cross-media services provider.

Printing Impressions’ Digital Printing and Workflow News for May 2009

DEPENDING ON your point of view, the news out of San Francisco is either devastating or a continued call to arms in the battle against Do Not Mail proponents and their efforts at passing legislation at the state and federal levels.

HM Graphics -- Eight Is (Not) Enough

WHEN JOHN Sandstrom passed away in 1990, his eight children were suddenly left in charge of his printing operation. Having grown up in the graphic arts business, the Sandstrom siblings took the reins of their family’s Milwaukee-based business, HM Graphics.

K&D Graphics welcomed customers during an open house recently to view its new 12-color, 41? Heidelberg Speedmaster XL 105 which, at 120 feet in length, is one of the world’s longest sheetfed printing presses. The 150-ton press is capable of perfecting six colors on both sides of the sheet in a single pass. It also features double in-line aqueous/UV coaters and a Cutstar roll feeder.

Outlook Pundits Weigh in on Economy

Some 60 attendees at the Print Outlook portion of the NPES 2009 Industry Summit heard predictions on the outlook for the overall U.S. economy, the printing industry specifically and on advertising media trends.

WHAT IS there not to love about the state of Pennsylvania? “This is the land of Ben Franklin, and his most conspicuous craft is printing,” notes Eric Roberts, director of sales for Philadelphia-based Bartash Printing. Roberts echoes his fellow Philadelphia-area and eastern Pennsylvania printers when it comes to the chief advantage they enjoy as businesses: the ability to reach as far north as New England and as far south as the Carolinas.

THE NEWS on April 15 that Cenveo was closing Anderson Lithograph and merging it into its Los Angeles-based ColorGraphics facility marked a sad day for the U.S. printing industry. With a national reputation dating back to 1951 as a provider of ultra-high-quality web and sheetfed offset output; highly responsive customer service; and an unwavering commitment to sustainability—long before environmental stewardship became fashionable—Anderson Litho was an industry stalwart.

The printing industry, hit hard by the economic downturn, has been looking for ways to hire new employees and reshape their workforces without incurring traditional search costs. There has also been a need for an electronic forum where industry professionals can meet and discuss issues relevant to their areas of expertise. PrintingSkills is that meeting place.

Quebecor World and Its Creditors Hammer Out Term Sheet

The clouds may soon be parting for Quebecor World in its struggle to remain an ongoing concern. The printer announced that it has reached an agreement in principle on a term sheet with its creditors, which will pave the way for Quebecor World to exit creditor protection in both the United States and Canada.

In a surprise announcement, U.S. Senator Arlen Specter (R-PA) stated on the Senate floor that he will not support the Employee Free Choice Act (EFCA) this Congress. Specter was a co-sponsor of the bill in previous sessions and the only Senate Republican vote for it in the 110th Congress.

IT ISN’T necessary to sell printers on the beauty and endurance of ink. Some prefer to take it home with them, and not just on their clothes. The morning show of a Philadelphia-based radio station, WMMR, has a weekly feature it calls Tattoosday, in which listeners come in to the studio on a Tuesday morning to have a small tattoo applied by a local artist.

The MATLET Group -- Power of the Press

GARY STIFFLER considers himself a good judge of people. A 28-year printing industry veteran, Stiffler’s background includes stints with World Color and Quebecor World. During that time, he also became a shrewd arbiter of talent, appreciating the timber of employees that can enable a company to endure the peaks and valleys of business over the long haul.