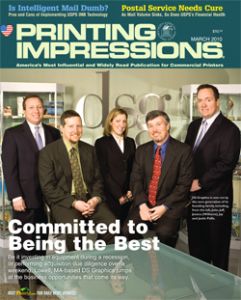 Commercial printer and bindery news from Across the Nation in Printing Impressions March 2010 edition.

An Idea that Sticks to the Wall...Literally

Since I am on Topps' e-mail list and am a sports card collector of 30-plus years, the subject line of "Topps Larger-than-Life Wall Graphics" in a recent missive was intriguing.

Digital printing and workflow news from Printing Impressions' March 2010 edition, including items on PODi, Kodak, EFI Connect and On Demand.

Embezzler Gets 24 Years in Prison

You will be signing up for the first-ever university of printing sales, with its campus located in a magazine. It's called Mañana University.

In announcing the deal, executives estimated that the combination will result in at least $225 million in annual savings within 24 months.

DS Graphics takes a multichannel-services approach based on the fundamental principle of being the best in every aspect of the total value proposition.

How the iPad Impacts Print —Sherburne

Certainly, products like the iPad and the Amazon Kindle, are changing the world of book publishing.

The USPS is facing a possible loss of $7.8 billion in 2010, even after implementing cost-cutting initiatives that would slice away $3.8 billion.

Donnelley has agreed to fork over roughly $481 million, or $11.50 a share, to obtain financial printer Bowne & Co.

To Wait or Not to Wait?

In order to claim automation discounts, mailers must switch from using the Postnet barcodes to the basic or full-service IMB by May of 2011.