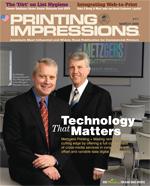 Ben on Virtue and Maturity -- DeWese

WILL I EVER grow up? I’m beginning to think it ain’t happenin’. It’s doubtful! Sob. I’ll never reach adulthood. Sob. Sob. I thought for certain I would be grown up by age 40. Didn’t happen. Then I thought, “50: That must be my magic number. Everyone I know who is 50 is sure enough grown up.” I missed again.

Bold Future Ahead: 4Over Expands Again

With much of the country mired in the dead of winter, roughly 100 clients and journalists witnessed Glendale, CA-based 4Over taking the wraps off its sixth production facility, a 50,000-square-foot plant here, under warm, sunny skies, as shown in the photo below.

An employee at a Cenveo envelope plant here was found dead February 10, apparently crushed from a machine accident, according to the Chicago Sun-Times.

Database Management -- The Cleaner, the Better

EVEN THOUGH mailing and database management services have been around since the 1980s, a substantial number of printers expanded into this highly technical (and profitable) market as competition heated up with the new millennium. Today, more printers are continuing to invest in these capabilities in spite of—or, perhaps, because of—the bleak economy. After all, the weaker the financial outlook, the more important it is for service providers to ensure a bigger bang for their clients’ shrinking print dollars.

GAUGING WHEN a technology is really going to take off is always a tricky proposition. Product roll-outs usually get pushed back due to unforeseen technical issues, and potential buyers tend to be more cautious than even a low-ball projection for the rate of adoption.

Printing Impressions' Letters to the Editor for March 2009

THE NAME Metzger has been elevated to rock star status in the printing industry, and with good reason. Joe Metzger can be seen frequently on the trade show/conference circuit, discussing any number of relevant industry issues. Frankly, if you can recall seeing him give more than a few talks, then feel free to count yourself among the printing realm’s cognoscente, boasting big picture perspective.

Metzgers' Journey to the Head of the Class --Michelson

IF YOU were writing a historical novel based on the real-life saga of a graphic arts business that had to reinvent itself—again and again—over the course of several decades, Metzgers Printing + Mailing would serve as the perfect case history. Founded as a typesetter in 1976, the Toledo, OH-based company rode the desktop publishing (DTP) wave in the mid-’80s to become a DTP service bureau, before transitioning itself into a color copy center and then a color separations business.

REPORTS OF the demise of newspapers may not have been exaggerated after all. In fact, I’d go as far to say they’re underestimated. The newspaper industry has long cried poor, living off thin margins for years, yet plugging away in the name of all that is sacred. No one enters journalism believing they’ll make a comfortable living.

One-to-One Printing -- Where Are the Repeat Jobs?

THERE IS no question that one-to-one (personalized) digital printing works. Just skim through the case study archives of the Print On Demand Initiative (PODi). Click through the case studies on vendor and printer sites. Read the articles and the blog posts. View the Webinars. Proof that variable data printing (VDP) works is everywhere.

I’M NOT A big fan of defending print. I know, a strange way to start a column in a printing trade magazine. Clearly, the graphic arts industry is undergoing a time of dramatic change, and we speak a great deal about competition from alternative media and why print is still important in the media mix.

Roughly 200 RR Donnelley employees from the former Von Hoffmann plant in Jefferson City, MO, have been laid off either for a few weeks or permanently, according to several media reports. Doug Fitzgerald, executive vice president of communications at RR Donnelley, declined to comment.

A fourth-quarter loss of $137 million has prompted Eastman Kodak to announce that between 3,500 and 4,500 jobs will be eliminated, representing between 14 to 18 percent of its total workforce. The company lost 51 cents a share in the fourth quarter, compared to a 75 cent per share profit ($215 million) during the same period the previous year.

Transcontinental has implemented rationalization measures to address the recession, including the elimination of about 1,500 jobs. Substantive cost-cutting measures are being implemented at plants throughout the United States, Canada and Mexico.

WHAT’S THE first thing a print buyer does when considering a new print supplier today? The answer, of course, is to Google them. Obviously, being listed on online search engines is directly related to the amount of traffic your Website generates.

Citing a nine billion piece reduction in mail volume during 2008, U.S. Postal Service Postmaster General John Potter asked Congress in January to drop the requirement of delivering mail six days per week. Potter noted that the USPS was $2.8 billion in the red during 2008, and that the loss could climb as high as $6 billion this year.

Midnight will not toll for the former American Color Graphics (ACG)printing plant in Medina, OH, which had been scheduled to be shut down this summer. According to the Akron Beacon Journal, parent company Vertis Communications felt that changing business conditions warranted allowing the facility to stay open through the middle of 2010.

WHAT DO professional golf and Web-to-print have in common? Both make reference to a skins game, where a lot of money is at stake for something that, at first blush, doesn’t seem all that difficult to accomplish. The skill and effort involved are often easily overlooked.

IS THE PRINTER a one-stop-shop? Is work completed in a timely fashion? Does the sales rep keep his/her promises? Is the printing company financially sound? These are some of the questions that Gretchen Morris ponders as the director of Global Catalog Production—and print buyer—at Edmund Optics (EO) America.