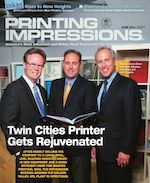 One point that stuck with me from the 2014 Inkjet Summit is the fact that many pages produced on continuous-feed inkjet presses today represent new jobs—not just work being transferred from toner-based digital or offset analog presses. Also key is the availability of more paper stocks. Most satisfying, too, is the sense of camaraderie that exists between veteran inkjet users—many of whom are competitors—inkjet suppliers and shops still considering a press. All constituents are committed to moving the industry forward.

More than 60 clients and prospects from 10 countries converged on the Fairmont Hotel in Vancouver, British Columbia, to attend a recent Canon VIP Customer Event, which featured a live demonstration of the new wide-format Océ Arizona 6100 series at Océ's regional office in suburban Richmond, British Columbia. The series includes the six-color Océ Arizona 6160 XTS and the seven-color 6170 XTS.

NPES Board of Directors and association staff gather on the U.S. Capitol steps during PRINT'S VOICE '14 Capitol Hill Fly-In, held in Washington, DC, May 6-7.

RR Donnelley announced that it has been awarded a $175 million, multiyear-agreement by F+W Media that renews and significantly expands the companies' relationship through 2021.

For those who attended the 2014 Inkjet Summit at the Ponte Vedra Inn and Beach Club in Ponte Vedra Beach, FL, there was no doubt that this 2014 edition was even stronger, more informative and more engaging than the first one, and plans are already in motion to raise the bar still further.

Joe Metzger, 50, president of Metzgers, passed away May 5 in Hospice of Northwest Ohio, according to the Toledo Blade. He was diagnosed with colon cancer in November of 2011.

Jerry Westcott began his printing sales career in 1970 and continued until retirement in 2007. During that 37-year run, he saw the industry rise, morph and digitize. This month, the authors are honored to interview Mr. Westcott as he discusses a variety of subjects. So, step in to the Delorean with us as we crank her up to 88 pages per minute and go back to the future.

Reilly/Schaefer on M&A Directions: A Question of Business Values

As we discussed in the first installment of this series, the pace of mergers and acquisitions among printing and packaging firms finally is on the rise after years of languishing in the doldrums. That means there's heightened interest in finding out what companies are worth and in determining what kinds of deals can be structured around these valuations.

Shapco Printing Gets a New Lease on Life with Capex Infusion, New Location

The future is bright at Shapco Printing, and both the leadership team and employee base are rejuvenated. A new home in Minneapolis, tons of new gear, a debt-free ledger and a new outlook on the printing world has Shapco aggressively moving forward, backed by an attention to quality that can only be appreciated by other perfection obsessors.

Hiatt Printing of Muncie, IN, the campus printing shop that locked horns with Ball State University back in 2012 when the school threatened to use eminent domain power to seize the printer's McKinley Avenue property, has closed its doors, The Star Press reported.

The Best Places in the United States for Printing Companies to be Located Are...

If your business is concentrated, it’s best to be nearer the customers than to their customers. Co-location is the home run strategy here. No traveling back and forth, and no sales offices to set up. The latter are always disasters with issues of taxation, law, rents and personnel.