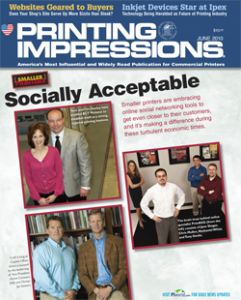 Allegra Network has leveraged its MatchMaker program to facilitate a $3 million sale, purchase and rebranding of an independent printing business.

Binding and finishing news from Printing Impressions' June 2010 edition, including items on Modern Postcard and the SGP Partnership.

Consolidated Graphics welcomed about 750 of its clients during the second annual emerge conference. The two-day event featured educational seminars, a business expo and plentiful networking opportunities.

One common message at the 2010 Offset & Beyond Conference was our industry's need for strong leaders with the drive, cunning and convictions who can steer their companies to profitability.

Despite the growth of social media, your Website remains an important marketing tool. It's your online storefront. It will either invite people in or make them look elsewhere. With about 30,000 commercial printing firms in the U.S., prospects know they'll find what they're looking for online.

Defining What MSPs Do —Sherburne

Is there actually a definition of what a marketing services provider is, or is that even the right term?

Digital Printing and Workflow Product Announcements from the 2010 On Demand Expo, including the Xerox Color 800/1000 and Konica Minolta C8000.

The jury came back with a verdict in favor of Genesis Press over  insurance company The Hartford and awarded the printer $14.5 million for its loss stemming from a March 2008 fire.

There's no question that inkjet was the hot ticket at Ipex, and thus is the primary technology focus of this article. There was a huge collective sigh of relief when visitors from all corners of the world began pouring into Birmingham, England, last month.

More Social than the Big Boys

SOME PUNDITS have argued that the social media craze is just getting started, and that it will have a long-term impact on how people, and business, will interact as the 21st century gathers steam. Others believe that certain social platforms, particularly Facebook, are in danger of flaming out within the next 12 months due to overexposure.

Winners of the Neographics awards, sponsored by the Graphic Arts Association, and highlights of Print in the Mix research.

You may recall the case of Lon Martinsen, who works for Grafix Screen Printing in Cotati, CA. Martinsen lost his right hand, temporarily, following an accident in early April while using a cutter.

"You have the right to remain silent..." surprisingly enough, was actually written and popularized by Harold Berliner, a former district attorney and internationally known printer.

Eleven of my readers are failing my PhD. course here at Mañana University. I have given my readers a once-in-a-lifetime opportunity to earn a doctorate in print communications sales. We are only in class number four in the first semester, and some of you are already failing.