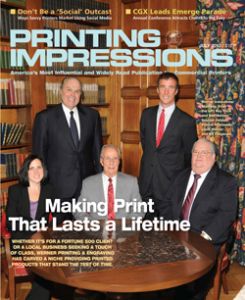 Yet when it comes to charging for things that should be included, airlines are allowed to get away with murder. Perhaps we can learn something from this high-flying model. Here are a few ideas—presented with tongue firmly pressed into the cheek—but offered to get you thinking...

Consolidated Graphics’ 2012 emerge conference and expo got off to a rousing start with a private parade through the streets of New Orleans. CGX then rolled out a blue-ribbon panel of keynote speakers, led by Bob Griese—legendary Miami Dolphins quarterback and NFL Hall of Famer.

An explosion and fire on May 28 rocked the Verso Paper plant here, claiming the life of a 50-year-old employee and injuring four others, the St. Cloud Times reported. More than 50 fire departments and other agencies responded to the blaze, which caused substantial damage to the mill's paper warehouse and infrastructure, including the electrical system.

I can’t recall an issue that got the printing industry at large more fired up of late than Toshiba America Business Solutions’ ill-conceived “National No-Print Day” campaign, which encouraged people and companies not to print or copy anything on Oct. 23 to help “raise awareness of the impact that printing has on our planet.”

Many printers have embraced the power of social media. However, being able to harness social media has proven tricky for many in the graphic arts industry, and indecipherable for some. There are common traps and pitfalls that can hinder your online marketing efforts.

CBS’ “Undercover Boss” television show recently featured FASTSIGNS International President and CEO Catherine Monson, who spent nearly 30 years with franchise printer PIP Printing/Sir Speedy. “The whole process was exhausting and grueling. But it was a load of fun and a great way to get a completely different view into the company and how to make it better,” Monson said.

Chicago-based Werner Printing & Engraving is one of the largest engraving and specialty printers in the Midwest. Werner's team of highly-specialized employees, buoyed by a crew of master craftsmen and women with an average of 25 years engraving experience, appreciate that their work will be carefully perused, coddled and admired for years to come.

RR Donnelley has signed a definitive agreement to acquire EDGAR Online in a deal valued at approximately $70.5 million. In other company news, Donnelley is closing its Danbury, CT, facility, a move that will impact 145 employees, according to Greenwich Time.

A highlight of Screen’s “Take a Closer Look” event was a series of brief testimonial presentations by current users of its equipment. Executives from several printing companies discussed their experiences with Screen Truepress inkjet printing systems and PlateRite computer-to-plate (CTP) units.

After 78 years of family ownership, Jim Motheral, president of Motheral Printing, announced that his company has been sold to Ovation Graphics. Terms of the deal were not disclosed. Ovation also recently purchased Fort Worth's Branch-Smith Printing and is affiliated with Ussery Printing, of Irving, TX.