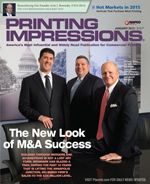 This year is a turning point for print with a slight increase in nominal revenues to US$196B (+<2 percent). Low interest rates and commodity prices from an artificially high dollar will appear to stimulate the entire economy before the reality of global imbalances between levels of debt, equities and commodities carry us into the next downturn and something not experienced in 70 years: a currency re-set.

You may have noticed our tribute on this issue's cover to Irvin J. Borowsky, founder of Printing Impressions and a successful b-to-b publishing company, who passed away Nov. 25 at age 90. "Mr. B," as he was affectionately called by many employees, showed his entrepreneurial acumen early on in life. At age 12, he answered an ad in Popular Mechanics for a $5 printing press. And, by age 14, he had launched City Wide Press, printing business cards on the small, handfed press that he had set up in his bedroom.

The world of 3D printing is a fascinating one, and while the "printing" aspect is strictly an accident of terminology—rendering, replication, whatever term you prefer—we've profiled a few printing companies

that have gone down that road. As it stands, 3D is purely ancillary, providing one-off jobs as opposed to volume business. BUT...that doesn't mean 3D won't evolve and turn into a bigger profit center.

According to an InfoTrends' survey of Printing Impressions readers, print providers that are expanding services beyond ink/toner on paper are experiencing an 8 percent to 10 percent boost in annual revenues and winning new customers.

Printing Impressions and its sister publication, Book Business, hosted the Digital Book Printing Conference (a.k.a. DigiBook) at the Marriott Marquis in New York on November 19th. In other news, Manroland Sheetfed hosted the ROLAND 700 Evolution event that took place at its headquarters in Offenbach Am Main, Germany.

McQuiddy, a Nationwide Argosy Solutions company, has been sold to Geographics Inc. of Atlanta, according to The Tennessean.

The newly-minted Ironmark has added six firms through acquisition, with a pending seventh conquest slated to be its biggest acquisition yet. The company has ballooned from $3 million in annual sales to right around the $22 million plateau. And last September, Ironmark moved into a new, 52,000-square-foot plant, christened no less with the addition of two presses: an eight-color, 40˝ Komori Lithrone sheetfed offset press with coater and an HP Indigo 7600 digital press.

Legislative Agenda: 2015, The Year of Reform?

Will postal reform actually happen in 2015? Vice President of Government Affairs Lisbeth Lyons points out there are alternatives to Carper-Coburn that are "written and ready to go." Thus, don't let the multitude of new players on the landscape lead you to the conclusion that postal reform is restarting from square one. And no longer does Congress seem content on waiting until the U.S. Postal Service's situation reaches the critical level, when a crisis management solution is required.

Lessons from a Computer Nerd

Writing about what you know, in your own voice, is a valuable source of marketing content. Do what comes naturally and become a hero to your customers.

Citing low sales volume, Muller Martini will cease production of printing presses in the first half of 2015; however, it will continue to provide service support for printing press customers worldwide.

Quad/Graphics revealed that it is closing its direct mail facility on McCall Drive in Atlanta on or before Feb. 1 and will shutter its Dickson, TN, retail insert plant on or before March 15. Both moves were announced by the printer in letters sent out to suppliers.

For better or for worse, everything a sales rep does can be measured. The number of calls, appointments, quotes and, of course, sales, is tracked and noticed and becomes the answer to the ongoing and inevitable sales management question, "Is my rep doing the job?"