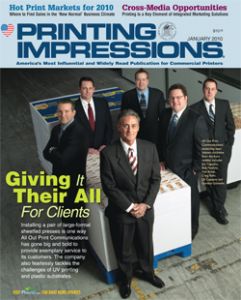 ‘Printers Continue to Dig Their Own Graves’ —Michelson

That was the subject line of an insightful e-mail I received recently from Tim Rolfsen, president of Indianapolis-based Vista Graphic Communications. Rolfsen felt the need to vent about the ridiculously low prices that printers often charge just to get the sale.

Printing as we know it is declining, but hot new applications and markets should maintain our $200 billion revenue base in real terms. Only three sectors within the top 25 will expand buys robustly at greater than 8 percent.

Commercial printer and bindery news from Across the Nation in Printing Impressions January 2010 edition.

Are QR Codes for Real? —Sherburne

As we start the new year, I want to talk a bit about QR codes. Some industry pundits think QR codes will make PURLs obsolete; others are touting the ability to combine the two ideas.

Cesar Gomez (41) died after the one-ton lift truck he was operating toppled onto him, causing a puncture wound to his head. Gomez was pronounced dead at the scene.

Did Theft Spell End for IP/Koke?

An ex-bookkeeper of a now-defunct printing company faces upwards of 100 felony counts for allegedly bilking the firm of more than $1.5 million, an act that may have contributed to its demise.

The event, which takes place Feb. 25-27 at the Miami Beach Convention Center, targets the printing and publishing industries in North and South America and the Caribbean.

How Bigger Can Be Better

All Out's trademark is "Big, Bold and Fearless." For you see, not only does company founder J.B. Capuano expect his production team to jump through hoops for their customers, he wants those clients to alter the approach they take to creating and disseminating their message.

Thanks to the quick maneuvering of co-workers, a man who was caught in the rollers of a printing press and asphyxiated briefly was able to return to work just two days later.

There aren't many print advertisements that allow you to lop someone's head off—heaven knows we wish there were more—but one printer seems to be head and shoulders above the competition in this regard.

This is a column about the ugly, evil and dreaded affliction known as distraction. As your beloved Mañana Man, I have pioneered the research and practice of losing my way and taking disruptive and bewildering side roads to nowhere.

Overview of the top five pressing legislative issues of interest to printers, along with a look at what's being done from an advocacy standpoint.

Valpak Operation Taken Off the Market

Cox believes Valpak has a bright future due to its venture into various new forms of media that is helping to generate new sources of revenue.