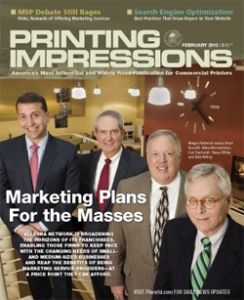 The 2012 value proposition for Allegra Network—now Allegra Marketing•Print•Mail—is this: The network uses the royalties it receives from franchisees to develop programs its members can then leverage. Small independent printers typically cannot afford to offer comprehensive marketing programs.

Classic Graphics has acquired certain assets of Henderson, NC-based Harperprints. Terms of the deal were not disclosed. Mike Harper, president and co-owner of Harperprints, has assumed the role of executive vice president, Triangle Division, in the combined company.

With the theme "Inspire Customer Passion," Konica Minolta Business Solutions revved up its more than 350 authorized dealership representatives and internal work force with a winning combination of expanded service offering announcements, educational sessions, as well as a product expo featuring new equipment, software and financial services available from Konica Minolta and 50 of its business partners.

Marvelle Stump is my recalcitrant protégé and the World's Worst Print Salesperson. I've been trying to train Marvelle for more than 20 years. He called excitedly to tell me, "Mañana, there are 26 other candidates for the presidential nomination. I'm going to their next state primary to sell them brochures, bumper stickers, yard signs and t-shirts.”

Marketing Service Providers : How Can We Help You?

Even those who scoff at the thought of printers referring to themselves as MSPs will all agree that, at some point along the marketing hierarchy, is a level for printers to become engaged with clients seeking assistance with their campaigns.

Marketing Services: To Be or Not to Be –Michelson

For some, expanding into marketing services makes sense, even though the definition of what services/products an MSP actually provides varies. But, one size does not fit all, in my opinion. It surely won't work for a printer-turned-MSP, which counts on advertising and creative agencies for a sizable portion of its revenues

The breakup of manroland AG is officially under way. L. Possehl & Co. (Possehl Group) has agreed to buy the insolvent press manufacturer's web press unit here, while Langley Holdings will take control of the sheetfed offset division in Offenbach, Germany.

There's but one thing worse than the Ides of March: having a Website that is not properly optimized for search engines. Everyone from the humblest slave to Caesar himself uses search engines to seek out the wares they need. Your print customers are no different.