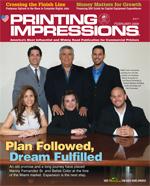 Printing Impressions' Across the Nation Commercial Printing News for February 2009

Wayne Angstrom, chairman and CEO of St Ives U.S., spearheaded the management-led buyout of the division from St Ives plc of London. The deal is valued at $39 million, including $34 million in cash. The consideration included a $5 million secured promissory note.

MANNY FERNANDEZ Sr. has that deep vocal tone and rolling Cuban accent that is so captivating, it makes you wish he’d talk all day. But it’s the story, and not the voice behind the owner of Bellak Color in Miami, that proves most memorable.

MATT ANSON’S quiver runneth over with “green” arrows. His multi-location binding, finishing and packaging company, Bindagraphics, is a mega corporation that has embraced sustainability practices across the board. And, those eco-measures are on time, on target and helping his postpress operation whizz past its competition. With each bulls-eye he hits, Anson is zeroing in on expanding business endeavors, as well as environmental cleanliness.

Modern general commercial printers are always searching for new, ancillary products and services that will give them a leg up on the competition in a competitive marketplace. But it’s doubtful that Sentinel Printing, a small offset shop, ever entertained the idea of selling used cars.

IN THE spirit of not only keeping you informed of the latest news and information regarding your favorite industry, we have decided to introduce a new feature, Printers’ Pulse, penned by yours truly. But, for this particular feature to hold any sustained interest, we will need you, the reader, to do a majority of the writing.

AS DIGITAL printing demand, applications and operations grow, adjustments are being made in finishing strategies. In-, near- and off-line solutions all still have their place, but determining the best approach has become a more site-specific decision.

IT MAY have come to your attention that the nation is in the clutches of an economic meltdown. But, despite the financial doom and gloom, there is good news for graphic arts establishments looking to improve their productivity and capabilities through capital expenditures: Banks may be telling sob stories when it comes to extending loans, but industry lenders are very much open for business.

Hometown Heroes -- Reaching Out, From Within

PEOPLE ARE innately good. As human beings, we cannot help but to feel compassion and empathy for fellow human beings, especially those in need. In our genetic makeup, we want what is best for mankind.

BEING LOCATED in Southern California isn’t exactly one of the more business-friendly regions for a $120+ million commercial printing establishment to call home. With a state facing huge budget deficits, printers here deal with escalating business taxes, high labor and healthcare costs, severe traffic congestion and very strict environmental regulations. One ray of good news, though, is the area’s year-round moderate climate that results in an abundance of sunshine.

THE DOWNFALL of the economy in 2008 has left the printing industry rattled and searching for ways to protect our companies, and even our own jobs. Print buyers have always had to focus on creating value and demonstrating return on investment—and this has only become more important in this shaky economic climate.

Goss International has appointed Jochen Meissner as its CEO. He succeeds Bob Brown, who will continue to serve on the company’s board of directors. Meissner had served as executive vice president and COO since he joined the company in 2002.

BOLINGBROOK, IL—Goss International has appointed Jochen Meissner as its CEO. He succeeds Bob Brown, who will continue to serve on the company’s board of directors. Meissner had served as executive vice president and COO since he joined the company in 2002.

WITH AN uncertain 2009 facing us, it is now more important than ever to diversify your services. One way to do this quickly and affordably is by partnering with others in the graphic arts supply chain. This serves three important functions:

WASHINGTON, DC—Healthcare, labor and taxation are some of the most pressing issues atop the Printing Industries of America’s legislative advocacy agenda for the 111th Congress. The PIA released its annual list of to-do and don’t-do items of general and particular interest to the printing industry.

WHEN IT comes to getting face time with print buyers, quite often the key to success is securing real estate—a small area on the buyer’s cubicle shelf, or a patch of wall in need of garnish. Achieving staying power in the minds of buyers is the reward of the creative, the motivated and ingenious.

Citing softness in the economy and a desire to have production capacity in line with print demand, Quad/Graphics announced it was shutting down the equivalent of one plant’s worth of capacity immediately. As a result, 550 positions—roughly 5.6 percent of Quad’s domestic workforce—were eliminated in five states.

RR Donnelley served notice to the former Heartland Press plant in Spencer, IA, that it planned to close for good by March 13. The move leaves 160 employees without jobs. The plant was obtained by Donnelley in the Perry Judd’s acquisition.