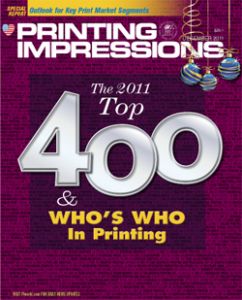 Santa won’t be scaling any prison fences this holiday season in  an attempt to deliver presents to former printing industry employees now serving sentences for bilking hundreds of thousands, and even millions, of dollars from their former employers.

This is a 2012 planning exercise. First, estimate the number of new account prospecting calls you made on a daily basis this year. This is background for your estimate of the number of calls that you expect to make next year.

A letter suggesting that a bomb was hidden somewhere in a  Vistaprint facility here turned out to be unfounded, but not before 300 employees were evacuated and police were brought in to investigate, the Windsor Star reported.

Judging the health of the book publishing industry is a lot like viewing a national weather map. The happy sun icon is shown here and there, but some angry clouds are clustered in certain areas. And in an era where the electronic reader is bludgeoning ink on paper, studies show that readership is growing on all fronts.

Tzvi Erez has been charged with 10 counts of fraud in the multimillion-dollar scheme that took place between 2005 and 2009. According to investigators, the victims were told that they were investing in printing contracts with major corporations including Subway, Movado and Tommy Hilfiger.

There was some good news for magazine publishers this year, as advertising sales levels  began to rebound. Looking at the catalog segment, there is no evidence of the printed catalog disappearing any time soon. A key focus for publishers and catalogers is how to continue to leverage their multi-channel marketing strategies.

Looking ahead to 2012, it seems as   if the commercial printing industry, the country as a whole and even the global economy have been cast in a sequel to the Bill Murray movie that nobody wanted to see made—Groundhog Year. The first draft of the script for the coming year reads much like it did for the past two years.

As the postal drama continues to unfold, printers and mailers are mindful of their obligation to continue providing customers with maximized printing and postage savings. That won’t change, regardless of what the USPS looks like in five or 10 years.

These three printers—Foxfire Printing and Packaging, Walsworth Publishing, and Direct Impressions—offer hope in an industry that has seen its share of adversity in recent years. Perhaps they may offer an idea or two that is applicable to your own business.

IBS  Direct, based here, has completed a deal to acquire Mars Graphic Services of Westville, NJ. Terms of the deal were not disclosed. IBS Direct (ranked number 289, with $14.7 million in sales, on the 2010 Printing Impressions 400) offers printing solutions, direct marketing program management, and new marketing technologies to implement and measure its customers' campaigns.

Is Obama no Friend to Printing?

President Obama has signed an executive order that directs federal agencies to, among other things, stop printing documents that can be posted online; and end the practice of buying swag—plaques, clothing and other “unnecessary” promotional items. The order reportedly will cut spending by 20 percent, providing billions in savings.

It was Obama’s re-election campaign that decided to sue a printer (Washington Promotions & Printing) back in October. The campaign alleges trademark infringement and unfair competition violations via the sale of items featuring the “Rising Sun” logo used in Obama’s campaigns, Reuters reported.

Succeeding in the business world isn't so different from school. The firms with the biggest printing presses, fastest turnaround times and drop-your-drawers prices do not command the largest profit margins or strongest customer relationships.

Quartier Printing, based here, has completed a deal to acquire Cayuga Press of Cortland, NY. Terms of the deal were not disclosed. The NAPL mergers and acquisitions team provided guidance to Quartier Printing.

Now in its 28th year, the Printing Impressions 400 provides the industry’s most comprehensive ranking of the leading printing companies in the United States and Canada. The listings include company name and headquarters location; parent company, if applicable; current and previous year’s rankings; most recent and previous year’s fiscal sales; percentage change; primary specialties; principal officer(s); as well as number of employees, manufacturing plants and total press units.

Truths from the Trenches –Dana

What if you could ask a room full of print buyer what they expect from commercial printers today? What qualities are they looking for? What would make them choose Printer A over Printer B?

While 2010 was resplendent with major printing company acquisitions, its successor came and went with little fanfare. Asset sales and closures took center stage in 2011, and crime continued to play a leading role from a news standpoint.