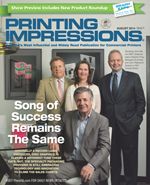 A Supporting Role for Print in Movies, TV Shows and Commercials

While Hollywood may not actually have a soft spot for printing presses, what it does have is the desire to mimic and relive history (past, present and sci-fi future) through films. Since the printing press has been an important part of history, countless storylines and scripts have included it in some capacity or other.

The more evolved of the printing industry's species will be on hand at Chicago's McCormick Place South from Sunday, Sept. 28, to Wednesday, Oct. 1. The non-evolved in our midst, as Ralph Nappi, president of the Graphic Arts Show Co. (GRAPH EXPO's organizer), observes, will spend that time "pulling in their horns" instead.

Beeline and Blue of Des Moines, IA, Creates a Niche in Wide-Format Wrapping

For a small printing company in a small state and operating in a small market, Beeline and Blue has a penchant for thinking big. Wide-format digital printing in general and the Digital Décor solution in particular are definitely the main talking points in Beeline and Blue's future.

Compensating Salespeople for Digital Jobs: Is This Still a Problem? Yes

For the modern sales rep who toils for a printer that offers digital output, the days of being intimidated by the technology are long gone, observes Bill Farquharson, a vice president of NAPL and author of "The Sales Challenge" blog that appears in Printing Impressions' "Today on PIworld" e-newsletter. Small orders equal small commission checks, and salespeople are "following the dollar," he adds.

What better place for Fujifilm's Graphic Systems Div. to host a media event on June 20 showcasing its production inkjet strategy and commitment than at Gilson Graphics, a commercial printer/marketing services provider based in Grand Rapids, MI, that's been an early adopter of cutsheet and continuous-feed Fujifilm inkjet presses?

Konica Minolta organized a press conference, held in its Customer Engagement Center on Lexington Avenue in New York, to announce its new 100 page-per-minute (ppm) color printer, the bizhub PRESS C1100, along with a new cloud-based document management solution, FileAssist for Graphic Communications. But executives took the opportunity to lay out Konica Minolta's blueprint for the future, the key to which is understanding customers' business requirements.

EFI Claims Victory in Lawsuit Brought by a Patent Troll

EFI announced that it has prevailed in a court case filed against the company in what it characterizes as a "patent troll" attempt to extract a settlement. In early July, the U.S. Court of Appeals for the Federal Circuit confirmed that a device profile patent asserted by a subsidiary of the non-practicing entity Acacia Research against EFI and 31 other companies is invalid.

Farquharson/Tedesco on Business Development: How to Build Sales Pipelines

A hunting mindset is a crucial element for managing the sales process. A hunter controls his or her day and carves out significant time for new customer development. Hunters develop numbers-oriented processes to support their hunting activities and are disciplined enough to follow the process through.

For the Pioneer Group in Big Rapids, MI, the Need for Web is Far From Dead

Father and son owners Jack and John Batdorff believe there is still an important need for web offset printing.

A stunning example of changing with the times is offered by DISC Graphics, a multimillion-dollar specialty packaging solutions provider with a 200-employee army based in Hauppauge, NY. Believe it or not, this printer debuted in 1969 as an in-plant provider. "We're being as innovative as possible, especially given the spaces that we're competing in," said Margaret Krumholz, president of DISC.

GPO Seeks to Reduce Staff By 100 Positions Via Buyouts

As the U.S. Government Printing Office (GPO) shifts toward publishing in digital formats and in response to what it feels is a continuing decline of traditional printed products, the agency informed employees of its plan to send a request to Congress and the Office of Personnel Management (OPM) for authority to offer buyouts and early outs to the agency's 1,850 employees.

Printing Industries of America (PIA) has announced the recipients of its 2014 InterTech Technology Awards. An independent panel of judges deliberated over the selection of technology nominations, which showcased the dynamic nature of the industry.

SG360º, a Segerdahl company, has announced the acquisition of Broadview, IL-based direct mail printer Lehigh Direct, a division of Visant Corp. The combination of the two companies creates one of the nation's largest in-line variable imaging direct mail service providers.

It's likely that from now on, organic growth is going to be difficult for most printing companies. The opportunity to grow by acquisition still exists, but not necessarily in the ways that were the norm when the industry consisted of two or three times as many firms as it does now. Tuck-ins are an adaptive response to profound changes in the M&A landscape—and, when managed properly, the key to enabling serious buyers and sellers to get what they want.

END_OF_DOCUMENT_TOKEN_TO_BE_REPLACED
Subscribe
Upcoming Webinars
Inkjet: It is Here and Now