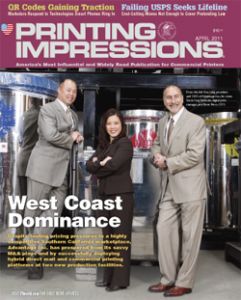 Pricing pressures are arguably as strong in Southern California as they are in any part of the country. For Anaheim, CA-based Advantage Inc., a purveyor of direct mail, commercial printing and marketing solutions, it’s a fact of life.

The USPS is projected to reach its statutory borrowing limit ($3 billion per year/$15 billion) by the end of its fiscal year in September. At that time, a $5.5 billion RHB bill and a $1.2 billion workers' compensation liability will come due. Mr. ZIP will fall about $2 billion to $3 billion shy.

Beware of Waking the Neighbors –Cagle

A 61-year-old man, Andrew Spiteri, became so incensed by the constant rattling of a printing press at a neighboring company that he proceeded to damage three cars in the parking lot of said company (Miller Distributors) to the equivalent of about $4,400 worth of damage.

After mulling its fate for the better part of a month, book manufacturer and specialty publisher Courier Corp. has decided to close the company's manufacturing plant in Stoughton, MA, on April 30, due to competitive pressures and technology shifts affecting the one-color paperback books in which the plant specializes.

DG3 North America, a provider of global graphic communication  solutions, has acquired substantially all of the assets of The Ace Group, a full-service printing and electronic marketing solutions provider in New York.

"We were thrilled with the results of our 36th annual show in Orlando," says George Ryan, GOA president, noting a 40 percent increase in pre-registrations. "Attendees were particularly drawn to the co-located FESPA Americas event, which enjoyed much traffic and excitement on the show floor."

How to ‘Build’ a Sales Rep –Farquharson/Tedesco

Greetings from the  future. Printing Impressions has asked us here at Robosales Inc. to submit a report on our newest Cyborg offering: The Perfect Sales Rep. That's right; you can now custom-build your own salesperson from the wing tips up or the makeup down, choosing the size, gender and personality that best suits your needs.

Mike Stevens is not your typical printer. The first member from an extended family of blue-color, union automotive plant workers in Michigan to graduate from college, Stevens decided to purchase a Fargo, ND, quick printing establishment in 1983.

Could there be a tougher   job for print reps these days  than cold-calling? I think not. Technology lets us screen calls and, like it or not, lots of print buyers are screening yours. This is efficient (for them) and frustrating (for you).

Quad/Graphics Inc. announced it will cease production at its Mt. Morris, IL, facility in May as part of its ongoing plan to integrate operations following the company's July 2, 2010, acquisition of Worldcolor. The  closure will impact about 230 employees.

Technology leaders have recognized for some time that QR codes will play an important role in print marketing. As these printers attest, adding a QR code as a way for people to respond is becoming a mainstream marketing technique.

Yearbook printing and production specialist Walsworth Publishing has invested nearly $3 million in printing equipment for its facility here, a move that the company expects will provide new jobs and enable it to offer a broader range of products. Highlighting the acquisitions are an eight-color Baker Perkins G14 heatset web press, along with a 10-pocket Muller Martini 235 saddlestitcher.

Women are much better communicators. They are terrific negotiators. That has been proven by the Harvard Negotiating Project in its long-term studies. My assertion, in 1984, was that females are better at conflict resolution and have greater potential to be much better printing industry salespeople.