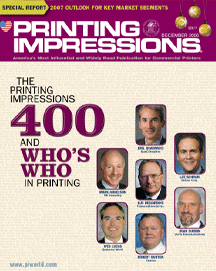 RICHMOND, VA—Cadmus Communications has been selected by business-to-business media firm 1105 Media to be its exclusive provider of publisher services.The four-year deal sees Cadmus provide publisher services for all of 1105 Media’s current magazine titles from Cadmus facilities here and in Easton, PA.Chatsworth, CA-based 1105 Media was formed in March 2006 through the acquisition of…

2006: Year That Was Stranger Than Fiction —Michelson

AS WE finish compiling the annual Printing Impressions 400 ranking—now in its 23rd year—it’s a good time to reflect on major events that helped shape our industry during the past 12 months. A fiction writer would have been hard-pressed to develop a plot line with more drama, intrigue and folly than what played out in 2006 at some of the printing industry’s largest publicly held establishments. Front and center, of course, was the unsolicited, and cantankerous, takeover attempt of Banta by hard-charging Cenveo Chairman and CEO Bob Burton. After several volleys back and forth between Burton and Banta Chairman, President and CEO Stephanie Streeter,

NEW YORK—A $210 million commitment by Allied Capital of Washington, DC, has fueled the senior management-led buyout of EarthColor, a leading commercial printer serving clients in the pharmaceutical, telecommunications and financial services industries. The management team made a significant equity investment in the company, acquiring a majority of the voting stock. EarthColor has eight plants overall, with production facilities in New York, New Jersey, Florida and Texas, and prepress operations in Arizona. “We have known the Allied Capital team for some time now and are pleased to have them as our new financial partner,” notes EarthColor founder and CEO Robert Kashan. “They have worked hard to

MENASHA, WI—Among the terms RR Donnelley conceded in its agreement to acquire Banta Corp. were the promise to donate $1.5 million to local charities, along with giving employees of each entity equal consideration when pondering staff reductions, the Milwaukee Journal Sentinel reported, citing Securities and Exchange Commission (SEC) filings. At Banta’s request, the local charitable contributions will continue for at least three years. Additionally, Chicago-based RR Donnelley will pay $1 million toward continued tuition reimbursement for Banta employees for two more years, while supplying comparable employee benefits for one year, the paper reported. Donnelley will also offer severance benefits similar to Banta’s for 18 months, and

Be Careful What You Wish for. . . —Cagle

BITS AND PIECES EVEN THE greatest, most legendary sports coaches have suffered a loss in the big game. Bob Burton endured one on Halloween day, when his $50 a share offer was trumped by RR Donnelley (RRD), which cruised past the Cenveo commander with a $52.50-per-share bid that Stephanie Streeter was all too happy to see. We’ve all heard the adage that perception is reality; it’s been noted here (a.k.a. “Before You Go...” column) previously. Burton represents, in many minds, printing industry carpetbagging. He preys on the wounded animals, uses gimmicks to artificially stimulate their stock price, cuts production ranks razor thin to

IN GENERAL, when a best-seller hits the market, it directly or indirectly benefits the entire book manufacturing industry. The long runs clog up capacity for those fortunate enough to garner the job, and creates overflow that needs to be spread through the ranks. Take Courier Corp., of North Chelmsford, MA, for example. The 2006 trade campaign started off slowly, notes Peter Tobin, executive vice president, but developed a head of steam in late summer and early fall, leading up to the holiday push. A degree of the pickup can be attributed to publishers hanging back on reprint orders. But what really lit the fire

FACING INCREASED competition from electronic alternatives and another possible jump in postal rates, players in the catalog and publication markets may have to fight for a successful future. Industry consolidation should also make tracking these segments interesting for industry watchdogs. According to “A Study and Analysis of the Future of Catalogs, 2006-2011” by PRIMIR (Print Industries Market Information and Research Organization), the North American catalog industry is in a state of disruptive change. This can be attributed to the Internet becoming more of a vital selling tool for companies that traditionally used printed catalogs to drive sales. The shift to online shopping by

HOUSTON—After briefly flirting with the idea of selling the company, Consolidated Graphics (CGX) decided that staying the course would be the most appropriate course of action. CGX has once again proven it is willing to resume business as usual by announcing plans to acquire The Hennegan Co., which is based in the Cincinnati suburb of Florence, KY. CGX signed a letter of intent to acquire Hennegan, an $85 million web, sheetfed and digital printer that produces a wide array of high-end products, including marketing materials, annual reports, brochures and catalogs, among other things. The transaction is expected to be completed within the next 90 days. “Bob

THERE’LL BE a slight hissing noise behind the strains of Auld Lang Syne at New Year’s Eve celebrations this year. It’s the sound of some steam going out of the economy. The slowdown in GDP growth isn’t expected to turn into a recession, but it will have an impact on printing industry sales growth. The one standout will be growth in digital printing. While it continues to use the Blue Chip Economic Indicator Consensus in its forecasting, NAPL’s Printing Economic Research Center (PERC) is now making that number the upper bound of its economic outlook range, reports Joseph Vincenzino, senior economist. PERC’s analysis had

NPES members attending the 2006 Annual Conference in Ponte Vedra Beach, Florida last month were treated to a business-intensive agenda featuring more speakers and ultra-current content than any previous event has afforded. With guidance from the Association’s Programs and Meetings Committee – Bruce Goodwin, John Stewart, Steve Fullerton, and Elinor Midlik – the Conference program was designed to engage members in lively dialogue with an array of industry leaders assessing and driving new business models of print. The program was enhanced by outstanding representation from the printing company community. An interactive printer panel discussion, featuring three executives assembled and moderated by NAPL’s Joe Truncale,

WHEN YOU think about it, the direct mail industry boasts some of the most formidable enemies and loyal friends today—just another way of saying there are “challenges and opportunities.” But it’s not tired, cliched rhetoric. It seems that the tougher life gets for the mailing community, the bigger the potential payoff. As this edition went to press, the ‘Lame Duck’ Congressional session was winding its way down and, with the Republican party so severely beaten, the likelihood that meaningful postal reform could be hatched prior to the final whistle seemed quite remote. But for some producers of direct marketing materials, the farther away cost

EVER WONDER about the heft of the paychecks top executives in the printing industry haul in? This is your chance to see what the top money earners are taking to the bank. Printing Impressions’ 17th annual executive compensation report highlights the industry’s top earners at the largest publicly held printing companies. Mark Angelson, CEO of Chicago-based RR Donnelley, again ranks first in annual salary for this list, earning more than $5 million. This is the fourth consecutive year that a RR Donnelley exec has topped our list. The rankings indicate previous fiscal year salaries, most recent fiscal year wages, and the percentage change in

THE ANNUAL Printing Impressions 400 list can be used as a gauge of the health of the printing industry. Of the 400 companies on the 2006 edition, 287 have seen an increase in sales for the past fiscal year. Additionally, 153 of those 287 have seen double-digit increases. These are the stories of how some firms that experienced a successful year have bolstered their sales numbers. Dubbed “fast-track firms,” these industry stalwarts are leading the way though innovation, technology and a vision for the future. Southeastern Printing Stuart, FL Most Recent Fiscal Year Sales: $31.71 million Previous Fiscal Year Sales: $26.64 million Percentage Change:

HIGH POINT, NC—Graphic Printing Services (GPS) has acquired the business and operations of Dorsett Printing, located in Thomasville, NC. Dorsett specializes in the design and production of flexographic labels and tags.All of Dorsett’s employees have been retained. The combination of the companies is expected to create 10 new positions. GPS will also invest about $500,000…

MENOMONEE FALLS, WI—It’s been an active fall capex season for the Hi-Liter Graphics/Inland Graphics franchise, and 2007 is already shaping up to be pretty active. A 10-color Heidelberg Speedmaster 102 sheetfed press with perfector came online at Inland Graphics in October, according to Craig Faust, president and CEO of the organization. The press joins an existing four-color perfecting press. Hi-Liter Graphics, in Burlington, WI, is also augmenting its press firepower with the order of a four-color, 32-page 4x4 MAN Roland Uniset web offset press. Faust and Co. signed the contract days prior to Graph Expo; once constructed, the web press will be installed and operating

CHOOSING THE right employees is a key decision for printing companies. Facing short deadlines and tight margins, the addition of a below-par performer can prove costly for a graphic arts provider. “There is a lot of data which says that the cost of a bad hire is about two and a half times the person’s annual salary,” says Debra Thompson, president of human resources consulting firm TG & Associates in Tucson, AZ. “That is measured in terms of the wages paid, the cost of rework that was necessary, the cost of customers lost because of bad service, and even the cost of replacing good

CHANHASSEN, MN—IWCO Direct knows how to both multi-task and play the role of printing industry savior. The direct marketing solutions provider enhanced its capacity, expanded its geographic footprint and rescued nearly 450 jobs with the acquisition of Cox Target Media’s Valpak plant in Elm City, NC. The deal caps a two-year search by Cox Target, which in 2004 announced it was consolidating its operations into a new Florida facility and searching for a buyer to take over the Elm City plant. “This facility and its skilled workforce fully supports IWCO Direct’s unique, integrated business model that delivers direct marketing like no one else,” IWCO Direct President

JUST WHEN it appeared passage of the 1,000-pound gorilla known as postal reform appeared a fait accompli for Congress, in steps the National Association of Letter Carriers (NALC) throwing a curve ball that would make Roger Clemens blush. As the hours leading up to Congress’ election day break ticked off, the NALC somewhat surprisingly voiced its displeasure with some elements of the bill dealing with workman’s compensation. The NALC, a large and respected union, weighed in just late enough in the process to prevent a vote from being taken on legislation that would have updated the 30+-year-old, antiquated business practices of the United States

ONE OF the most neglected, yet cost-effective, ways to market yourself is public relations. According to the Public Relations Society of America (PRSA) definition of public relations, “Public relations helps an organization and its publics adapt mutually to each other.” In your business, you have several “publics” that PR activities will help you address, including: • customers/potential customers; • employees/potential employees; • the business community; and • the media. The key to public relations activities is to build awareness about your firm and what you can offer. The most-often considered tool in the PR toolbag is a press release. Perhaps you have hired a new salesperson, bought a