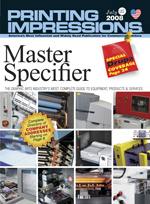 WILLISTON, VT—07/01/08—KBA North America, a global press manufacturer, pronounced Drupa 2008 a resounding success with a capacity crowd and sales success at the KBA booth during each of the 14 show days. Attendance figures soared and KBA’s spacious show booth surrounded by four litho presses was often so packed that it was almost impossible to push one’s way through. “Drupa 2008 exceeded our expectations in many ways,” says Holger Garbrecht, president and CEO of KBA North America. “According to group president and CEO Albrecht Bolza-Schünemann, the 14-day print media trade fair held in Düsseldorf in late May to early June, has brought in

HAUPPAUGE, NY—July 1, 2008—Muller Martini is very happy with the results the company achieved during the recently completed drupa show held in Germany. CEO Rudolf Müller summarized the event by saying: “We were successful in demonstrating the innovative power of Muller Martini to visitors. The new generation of machines has elicited a profound response, and numerous new projects have been launched.” Using the slogan “Grow with us”, Muller Martini presented a completely new generation of machines at drupa 2008 in Düsseldorf, Germany – underscoring the company’s commitment to partnering with its customers in order to help customers grow their businesses through new and

The graphic arts industry’s most complete guide to equipment, products and services is offered here as a digital edition for review online. Click this link to launch an electronic version of the buyer’s guide in a standard browser.

THOUGH SEVERAL of the press conferences and ”big news” at Drupa centered around digital printing, innovations in bindery and finishing were no less prevalent. In fact, many of them sprang from the very digital printing trends that overshadowed them. As digital printing speeds have increased, bindery equipment has also gotten faster, with vastly improved automation and simplified touchscreen controls to make them even easier to set up. JDF compatibility is becoming more common in bindery equipment, allowing devices to be preset using production data. Demands for higher-quality printed products have led bindery vendors to improve their paper-handling techniques. Folds look better on the latest

DRUPA’S STANDING as an international printing exhibition makes it the place to see the course of technological development in the industry laid out for the next four years. As even the following press and postpress wrap-up stories note, digital printing technology had its strongest showing yet. Even the developments in digital workflow were muted by comparison. Many of the product introductions were already covered in one of the Drupa Countdown stories published in editions of Printing Impressions leading up to the show. Therefore, this wrap-up will primarily focus on what was new in Düsseldorf. The event lived up to its billing as The Ink-Jet

ALTHOUGH MANY industry pundits were quick to label Drupa 2008 as The Digital Ink-Jet Drupa—given the technology previews shown there by the likes of Kodak, HP, Océ, Screen and Fujifilm—traditional sheetfed and web offset press manufacturers were just as diligent in showcasing their vision regarding the print shop of the future. Based on the sampling of new press offerings highlighted here, the massive trade show could just as easily have been called The Large-Format Press Drupa; The Short-Run, Fast Makeready Offset Press Drupa; and even The Value-Added Press Drupa. These themes were very apparent from Heidelberg, which filled two entire halls that were