CHICAGO — February 12, 2016 — Zazzle, based in San Jose, Calif., is a great example of profitable personalized printing at work. The company, launched in 2005 as an ecommerce provider, has assembled an amazing production portfolio producing everything from gifts for kids, to more mundane business cards and stationery, to signs and promotional items – almost all of which can be personalized or produced in short runs. 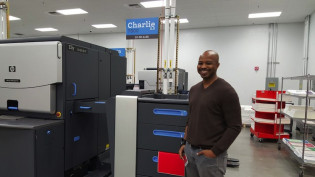 How does it handle the thousands of small lot orders they receive every day? When you visit its two plants – one focused on paper-based products and the other on textiles – you would not believe the volume that goes through there, yet everyone is so relaxed.

According to Charles Ohiaeri, the company’s chief fulfillment officer, that’s largely due to the efficient, proprietary workflow, augmented by the HP SmartStream Suite, that the company has created to feed orders through to production with minimal human intervention – yet with exceptional accuracy, quality and customer service. “We started out with a small color printer and a big idea,” he says, “and we really knew nothing about print. But it was quickly clear that we needed more horsepower – much more.” 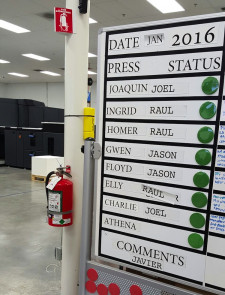 By that time, Zazzle had acquired an HP DesignJet 5000, one of the first to be installed, and only one of many firsts for the company. “We were happy with the DesignJet,” Ohiaeri explained, “and although we did significant due diligence in our search for more printing horsepower, that experience contributed to our decision to stay with HP for our paper-based printed products.”

Ohiaeri has also attended Dscoop, the HP users group, several times, which also bolsters his relationship with HP. “It’s an amazing community,” he said, “led by a group of really talented HP customers. I was floored by how open everyone was, even though they might be talking to competitors. That willingness to share is important to the continued vitality of the printing industry. You can’t help but come away with new ideas and strategies that you can put to work immediately in your own business.” 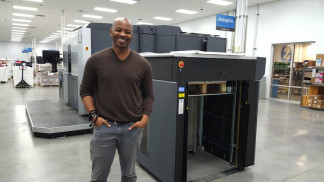 Zazzle’s first HP Indigo was a 3050. “During the installation process, HP told us we had to give the press a name. Our operator at the time was expecting her first child, so she named the press Beebe, as a play on the word ‘baby’. That started a trend for us – all of our HP Indigo presses (and we have eight on the floor right now) have human names. We just went down the alphabet, with our twin HP Indigo 10000s bearing the monikers Ingrid and Joaquin," said Ohiaeri.

He continued, "People care about children, while they may not care as much about a machine that is down. So we have personalized our fleet of printers just like we personalize products for our customers!” The second press was named Charlie, Ohiaeri’s namesake. “Charlie is the exception to our alphabetical naming strategy,” he chuckled. “When the first Charlie was retired, the next press we acquired picked up the Charlie name. I’ve been at Zazzle for 13 years with no plans to make a change, so I imagine there will be a third-generation Charlie in the fleet at some point!”

Zazzle was the site of one of the first installations of the HP Indigo 10000. Ohiaeri explained, “We learned a lot when Ingrid first joined our organization, and those learnings meant that Joaquin hit the ground running when he joined the group a few months later. We have been completely blown away by these presses and the value they have added to our business. They have increased our throughput exponentially, and the larger sheet size has opened up new applications that we couldn’t do in that volume before.” 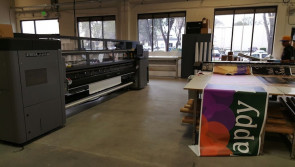 In addition to using its HP Indigo presses to produce invitations, greeting cards, business cards, posters and more, Zazzle is even printing USPS postage stamps under a program wherein the company is certified to do so. “You can imagine the massive permutations considering the form factor and substrate variations for postage stamps,” Ohiaeri said. “We needed a lot of processing and print power to do this application, and we’ve got the ideal production platform to do so. Plus, it delivers the quality and durability required by the USPS.”

Zazzle also recently added an HP Latex 3000 printer to its fleet of DesignJets to broaden its wide format capabilities for producing signage, and is looking at a number of other products that the larger equipment will enable.

On the textile side, the company has a variety of textile printers from suppliers such as Mimaki. Ohiaeri is keeping a close eye on developments in the dynamic textile printing industry. “Much of what we do is heat transfer,” he explained, “but we are also doing some direct-to-textile printing and would like to expand that capability. I’m sure we will be adding to our textile printing platform in the not-too-distant future.”

A group of Zazzle folks will be off to San Antonio for Dscoop 11 in April. “We’re always looking for new ideas, and willing to share ours as well,” Ohiaeri concluded. “And it is important to us to stay current with technology. There’s no better venue for to get all that done!”